Prep football: Austin Chrismon to get his chance at UNC 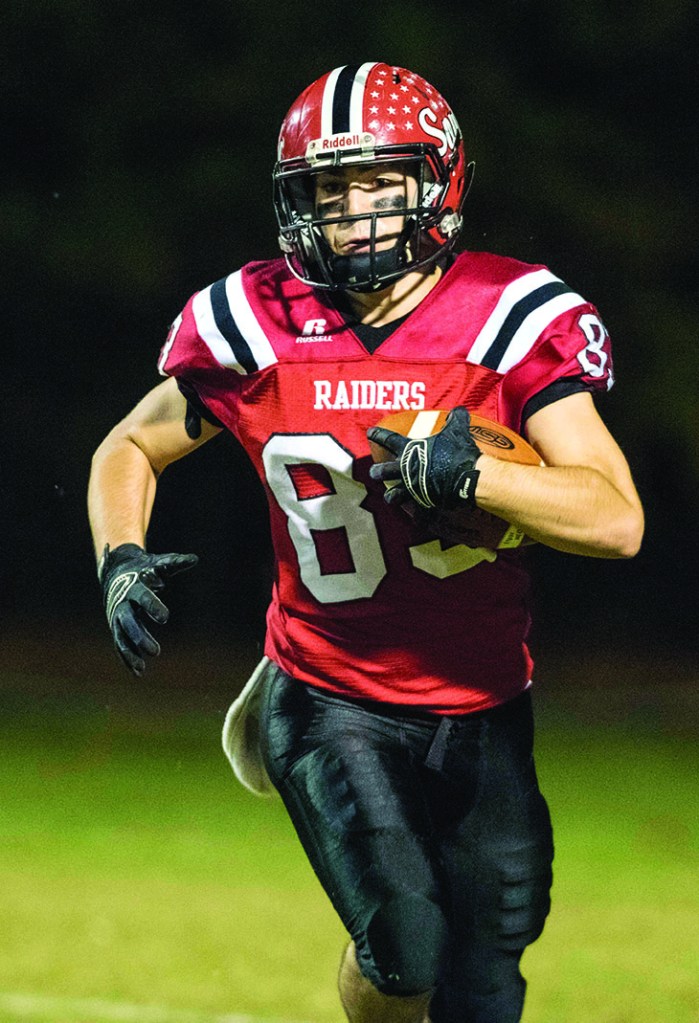 LANDIS —  No one has promised Austin Chrismon anything — other than a walk-on spot on the University of North Carolina football team.

But he’s made a promise to himself, and that’s  to make the most of every opportunity that he gets.

Being a preferred walk-on means the UNC coaching staff recruited Chrismon and wants him on the team, but that no scholarship was available.

The 5-foot-11, 185-pound South Rowan High senior has been the Raiders’ best player the last two seasons, spending time as a running back, quarterback, defensive back and slot receiver. He’ll be a slot receiver at UNC.

Chrismon has been a UNC fan since he was old enough to lob a baby blue rattle around his crib. His mother, Angie, South’s athletic director, was a UNC cheerleader. His father, Thad, went 26-12 on the mound with 41 saves for the Tar Heels as a standout reliever in the early 1990s. Thad is now South’s baseball coach.

“It goes back as far as I can remember,” Austin said. “Running around with a football and wearing Carolina blue. Some of my earliest memories are throwing a football around in the living room with my grandfather.”

That grandfather, Larry Deal, a South Rowan icon as a player and coach, passed away in October, during Austin’s senior football season.

“He was one of the biggest influences on my life,” Austin said. “I’m very proud to be his grandson.”

The highlight of his 2016 season was South’s lone win — against rival Carson. Austin rushed for 164 yards, twisted for the dramatic touchdown run that put South ahead in the final minutes. Then he made the interception that sealed victory.

Austin is an outstanding student with a 4.89 GPA, a Morehead-Cain scholarship candidate. Academically, he made himself recruitable by every school in the country. There was little doubt that the acceptance letter with a UNC letterhead was in the mail somewhere, but its arrival was still one of the finest days of Austin’s life.

“It was a relief because it’s where I’ve always wanted to go,” Austin said. “Just a great moment.”

Another shining moment for South’s student body president arrived immediately after the acceptance letter. This was a phone call from Gunter Brewer, who wears several hats for the UNC program. He’s the co-offensive coordinator, wide receivers coach and recruiting coordinator.

“He told me they needed some guys at slot receiver, that I was one of their targets, and I’d have a place on the team if I wanted it,” Austin said. “Slot receiver, special teams, just being a utility man, in general. I was elated with that phone call.”

Area coaches had made phone calls to UNC, recommending Chrismon, including North Rowan football coach/AD Ben Hampton and  A.L. Brown assistant coach Todd Hagler. Both have contacts at UNC. Both were glad to put in a good word.

“We’ve got a close-knit county, and when Angie told me at the basketball Christmas tournament that Austin was going to UNC, I volunteered to do anything I could to help,” Hampton said. “I’ve got a good relationship with (UNC  line coach) Chris Kapilovic and I spoke to him and Coach Brewer. I’ve seen enough of Austin in 7-on-7s and scrimmages to see that he brings a special, competitive intensity to the football field, and he’s made himself very marketable through his excellent performance in the classroom and with his community service. He has great character. You don’t hesitate putting your name behind a kid like that.”

For all the Chrismons, it’s been an exciting time.

“We’re a proud Carolina family,” Thad said. “We’re proud of Austin because of what he’s done in the classroom, but also because he’s shown the dedication to make himself a good athlete. He put himself in position to be recruited by his No. 1 school. He’s got a lot of work ahead of him, and he knows that. Every day will be a new adventure for him, but I’m sure he’ll make it fit.”

Walk-ons are a surprisingly vital part of UNC’s program. Former walk-on receiver Mack Hollins had 81 catches and 20 TDs during the last three seasons.

“We’ve never been about if a guy’s on scholarship, or he’s a walk-on — it doesn’t matter,” Kapilovic told the Daily Tar Heel last fall.  “Once these kids are on the team, they are part of the team. And if you produce, you play.”

When UNC beat 12th-ranked Florida State in November, three of the heroes were kicker Nick Weiler and receivers Hollins and Thomas Jackson. All three arrived at UNC as walk-ons.

That doesn’t guarantee Chrismon will be the next Hollins or Jackson — or the next Ryan Switzer, the player Chrismon reminds Hampton of.  It just means a lot of things are possible, and Austin has the sort of  desire that gives him a chance.

In mid-February, UNC invited Austin to Chapel Hill to meet players and coaches, to tour the facilities and to watch the UNC-Virginia baseball game.

“It was a great day, and it broadened my vision some,” Austin said. “This has all been like a dream come true. I’ve got my dream spot and it’s at my dream school.”

Austin’s academic aspirations are in the medical field. It won’t be a shock to see him as a member of the UNC sports medicine or athletic training staff someday.

But that’s the future. For now, he hopes to play some more football.

“We always encouraged him to make his own path,” Thad said. “But he’s a determined kid. Deep down, we’ve known for a long time that he wanted to play for UNC.”