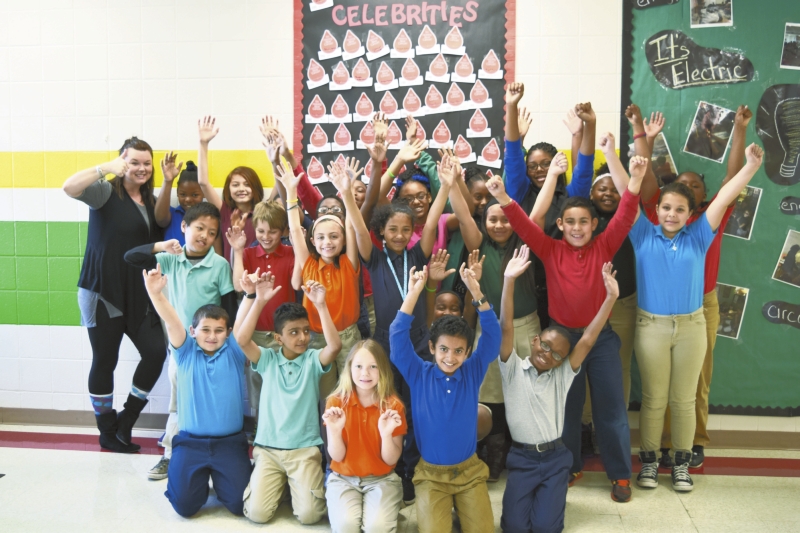 Kristina Sheets's class poses in front of a board marking many of the donations they've received over the past week. The class helped spearhead an effort to raise money for the Leukemia and Lymphoma Society. The school raised nearly $2,000. Rebecca Rider/Salisbury Post

SPENCER — Students at North Rowan Elementary School know they have the power to make a difference. During a change drive last week, the school raised nearly $2,000 to benefit the Leukemia and Lymphoma Society.

And they raised it, by and large, in quarters.

The effort was spearheaded by Kristina Sheets’ fourth-grade class, which earlier this year collected donations to ship to victims of Hurricane Matthew. Sheets said she got the idea from a friend and former co-worker who told her about the society.

Sheets posed the idea during her class’s morning meeting, a time when students gear up for the day. They took the idea and ran with it.

“They went around and talked to every class in the building about it,” Sheets said.

A donation box was placed in every classroom, and the students organized themed dress days that other children could participate in for a mere 50 cents. Another class pitched in and made orange awareness ribbons for leukemia and sold them during lunch for 25 cents a pop.

And throughout it all, the students learned. Sheets talked to the class about how scary it could be to be young and diagnosed with a serious illness like leukemia. She talked about how sick children undergo chemotherapy and other treatments, how they couldn’t go out and play like other children, how they often lose their hair, and how they may spend long periods of time in the hospital.

“A lot of kids die from it, and it’s very hard for their parents, siblings and relatives because they’re so little and they have to go through such a bad thing,” one student said.

Sheets’ class also researched the high bills associated with treatment and how many parents struggle to hold down a job while their child is in the hospital. The students shared as much of their knowledge with the rest of the school as possible, putting up posters and broadcasting informational videos during the morning announcements.

Sheets said she saw compassion blossom. When other children made fun of a picture of a cancer survivor on an informational poster, Sheets watched as her own students stood up to them, explaining cancer and telling them that they “weren’t being kind.”

“There was kind of a tough learning part for some of the kids,” she said.

At the end of the week, students at North Rowan Elementary raised a total of $1,993.48. Sheets said some donations are still trickling in.

“We wanted to help those people because they are people our age and they’re very sick,” student Jalayiah Jackson said.

Student Tiembra Morrison donated $55 of her own money.

There was even a friendly competition, with the highest-donating class winning a cupcake party. That honor fell to Rene Ivey’s fourth-grade class, which collected $234.

“They really took it seriously,” Ivey said, “They believed in the cause.”

Sheets said she hopes she is able to teach her students lessons that will last a lifetime, in addition to things such as math and reading.

“When they leave this classroom, I want them … to be good people,” she said.

It’s a lesson that her students have taken to heart, as they speak with passion about their fundraising.

“We may not be able to help all the people with leukemia,” student Caleb Truman said, “but we can help one person.”