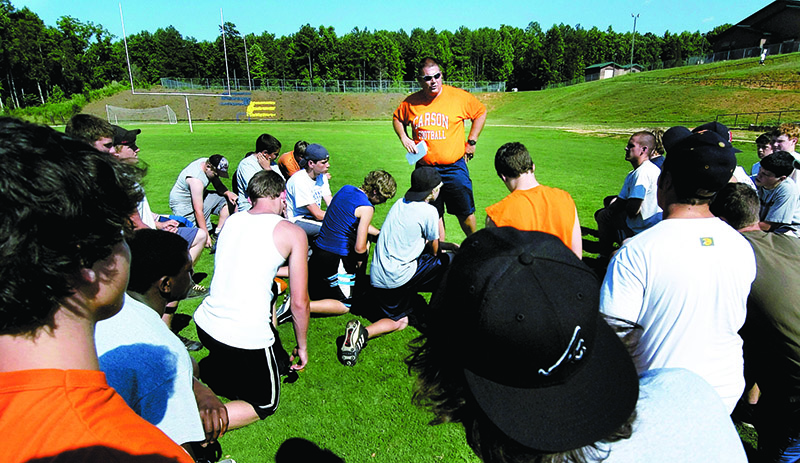 Joey Benton/Salisbury Post file photo In a file photo from June 2006, coach Mark Woody gathers Carson High’s first football players during an initial meeting at Southeast Middle School — the high school field had not been completed at the time. Woody’s final day as athletic director at Carson was last Friday.

He still has family in Durham, and that’s part of the reason for his switch from blue and orange to blue and gold.

The move likely will herald a return by Woody, 49, to the coaching ranks in the fall, although exactly what role he’ll be in is still a mystery. Northern Durham, after a 5-7  football season, relieved head coach R.J. Wilson of duties in February. No new hire has been announced.

Woody was a standout in  baseball and football for the Northern Durham Knights in the mid-1980s.

Ron Raper traveled to Durham to recruit Woody to block some people for Catawba College’s football team. A knee injury limited Woody’s gridiron exploits, but he was resilient. He found success in baseball.

After graduating from Catawba in 1991, Woody rejoined Raper, who had become the head football coach at West Rowan High. West’s principal  in those days was Henry Kluttz.

After Raper left West Rowan, Woody also departed. He learned some more football under coach Mike Carter at Mooresville High. Then he coached baseball and football at Northern Durham.

When Kluttz named Raper as Carson’s athletic director prior to the opening of the school, Raper recruited Woody all over again— this time to be Carson’s first head football coach. That was in the spring of 2006, months before Carson would officially open its doors to students.

A football coach can’t call in sick during the tough times, and Woody saw more than his share of trials and tribulations as outmanned Carson tried to construct a program from scratch. Woody recalls wearing a hard hat with the stadium still under construction.

He preached patience and work ethic when it looked like the Cougars might never win a football game.

Woody’s record at Carson was 0-22 when the school’s first victory finally happened against North Rowan on opening night in 2008.

Woody’s career won/lost record was train-wrecked by those first two seasons, but he never seemed to mind. He smiled throughout the building process and his patience and persistence eventually paid off.  Carson’s first winning season and the first playoff victory in school history came in 2009. The 2010 Cougars, with All-State back Shaun Warren running wild, won 10 games. That’s still the school record.

Change was inevitable. It arrived with a whirlwind in February, 2013.  Joe Pinyan, who had coached 100 wins in 10 seasons at Salisbury High, was announced as Carson’s new head football coach. Jim Grkman, who had followed Raper as AD was retiring— and that made Woody’s next step a natural one. He gracefully transitioned into Carson’s AD role, a job he held through last week.

Athletic director was a post that Woody seemed to relish. He was a reassuring presence at countless Carson sporting events, not just football games. He was well-liked. He’s a physically intimidating guy, but he’s a bruiser with a teddy-bearish personality. He’s also smart. He’s an English teacher.

In his final hours as Carson’s AD, Woody supported the Cougars on the softball field — in the rain. That said a lot about the kind of guy he is.

Lu Gamewell is handling AD duties in the short term, as Carson begins a search for Woody’s long-term replacement.