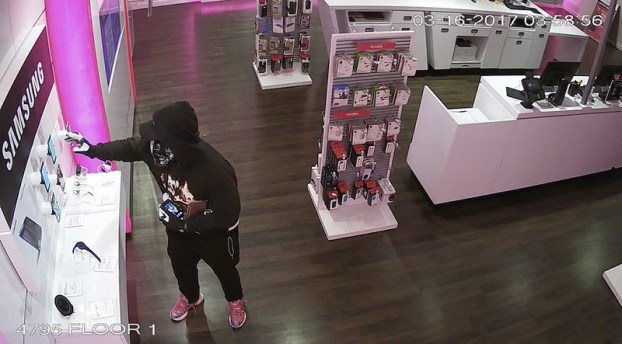 A man wearing a mask, gloves and hooded sweatshirt is shown in this still image from surveillance video taking cell phones from a T-Mobile store in Winston-Salem. Rowan County Sheriff's Office charged a man they say is shown in the video. Submitted photo SALISBURY — A Charlotte man remained behind bars Tuesday morning after a State Highway Patrol trooper stopped him for speeding on Interstate 85 last week and discovered a number of stolen cellphones inside the back seat of his Honda Civic.

Officials said the cellphones were stolen from stores in Kernersville and Winston-Salem.

A Rowan County deputy was contacted by a trooper who had stopped Jainlett on March 16 near Exit 74 on I-85. The trooper noticed multiple cellphones in the back seat of the car.

The deputy said in his report he could smell marijuana coming from the car. The deputy asked Jainlett to step out of the car and asked him about the cellphones.

The deputy contacted the T-Mobile loss prevention officer, who said the store had had a burglary that same morning.

An iPhone also was stolen in Kernersville, a Kernersville police detective confirmed. The detective said a number of iPhones were stolen that morning from a Sprint store at 1022 S. Main St.

Kernersville police provided still images of surveillance video from the T-Mobile burglary in Winston-Salem. The video showed someone wearing a black and white mask and gloves going to the iPhone section of the store and taking a number of phones.

Rowan County authorities confiscated 1 gram of marijuana in Jainlett’s car, along with a black and white mask, a red hammer, and gloves that were in the trunk. Authorities seized nine cellphones, all except for one of them iPhones, and an iPad. The items were all valued at $6,560, a report said.

Jainlett was convicted in 2016 of felony common law robbery in Mecklenburg County. He has a 2014 conviction for felony and misdemeanor larceny on his record. He remains in the Rowan County Detention Center under a $25,000 secured bond.