Len Clark: Thanks, Chuck, you changed my life 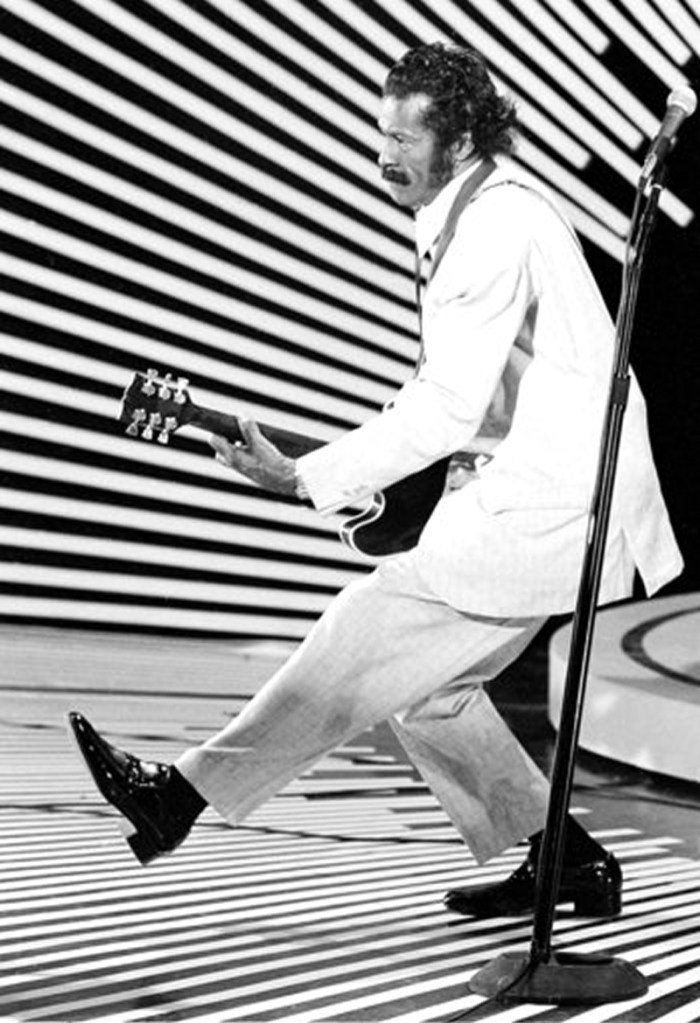 In this April 4, 1980 file photo, guitarist and singer Chuck Berry performs his "duck walk." The writer's attempt at the duck walk proved to be a turning point. AP photo

SALISBURY — On Friday, I took my old guitar out of its case. I’m in “downsizing” mode and figured I’d sell it on Salisbury Post Classifieds or eBay. I took photos — they are date-stamped, just in case you think I’m making up this story. It’s a 1963 Freshman rhythm guitar, a musical instrument of such low regard it would cause any Gibson or Fender in close proximity to spontaneously levitate to a safe, noncontaminant distance.

Regardless, it was my first guitar, purchased new, and its case was handmade of canvas, courtesy of my super-seamstress mother. It was my passport to the rough and reckless world of working men’s clubs in my hometown of Kingston Upon Hull, England — one of the largest fishing ports in the world at the time, where blue-collar clubs seemed to exist on half the streets in the city.

Trawlers returned from a week’s fishing in the dangerous waters of the North Sea, and crews would let off steam for three days before heading out on another perilous sailing.

The clubs did a tremendous business, and rock ’n’ roll was exploding. Behind the likes of the Beatles, Rolling Stones, Elvis, Beach Boys, Kinks, Hollies, Supremes, et al, there were hundreds of groups like ours trying to make the big time, cutting our teeth at any venue we could find, even if it cost us more to get there than we were paid.

We called ourselves the Dimes in honor of American blues and country and western music and a nod to our lead singer, who liked to sing Elvis songs. The subheading on our business card was “Four Men and a Bass Guitarist,” which referred to bass guitarist Rich Whittles, one of my best friends, who spent his life in the music and hospitality industry and died a short while ago, still singing.

Rich and I loved to ham it up on stage and outdo one another with pratfalls and jokes. One night at rehearsal, I decided to perform Chuck Berry’s “duck walk” —  playing guitar while crouching and shuffling across the stage using mainly your back foot. The stage was 6 feet high, and I never saw the drop.

Oh the pain, oh the laughs. Everyone thought I’d done it on purpose.

I couldn’t play that night. I should probably have been in traction. But the group sounded better without me and it wasn’t long (might’ve been the next week) before I ditched the guitar and became the band’s manager, arranging gigs and squeezing higher appearance fees.

Everyone in the band went on to a professional musical career, except me. I had tasted management and the art of negotiation. My guitar was mothballed for 50 years, until Friday. I guess I felt something — perhaps backache.

Thanks, Chuck Berry, you were the best.