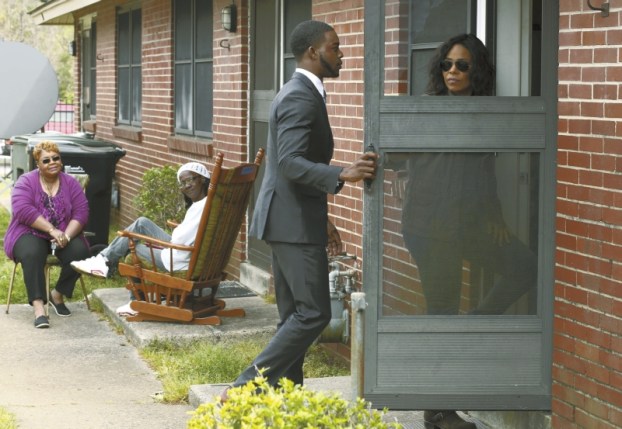 ‘Shots Fired” is a 10-hour event series that examines the dangerous aftermath of two racially charged shootings in a small Southern town, providing an explosive autopsy of the U.S. criminal justice system.

The series premieres on Fox TV at 8 p.m. Wednesday.

The series is produced by 20th Century Fox Television, in association with Imagine Television and Undisputed Cinema.

RELATED ARTICLE: A day in the life of a ‘Shot’s Fired’ extra

Connie Peacock of Salisbury was one of hundreds of extras involved last year in the filming of “Shots Fired,” a Fox TV series set to debut Wednesday night.

Peacock knows the basic premise of the series — racially charged shootings in a small North Carolina town lead to the investigation of a possible political cover-up.

But she’s in suspense about nearly everything else.

“It will be interesting to see how Fox TV handles such an emotionally charged subject,” Peacock says. “Like the viewer, I won’t know until I watch it.”

Set in the fictional city of Gates Station, North Carolina, “Shots Fired” will unfold over 10 episodes. It was filmed in Rowan, Cabarrus, Iredell and Mecklenburg counties from late March to early August — a period that saw some of its themes play out in real life across the country.

A month and a half after production ended, Keith Lamont Scott was shot and killed by a Charlotte police officer.

The three victims in those police shootings were all black men.

“Shots Fired” starts with the shooting of a white college student by a black officer. The ensuing investigation uncovers another police-involved shooting — of a black man — that was swept under the rug.

Peacock said the very title of “Shots Fired” gives viewers an idea of what to expect — a program that confronts violence. Connie Peacock of Salisbury was an extra for the filming of the new Fox TV series “Shots Fired.”

“How we interpret this violence is up to us,” Peacock says, “but to turn our heads and look away only intensifies the situation. Violence takes many forms and affects many people. … To say that violence is in the hands of only one group is misleading and unfair.”

She hopes the series can be a tool to help bring people together and prompt constructive discussions.

The first episode, which airs 8 p.m. Wednesday, opens with the aftermath of the college student’s death. To ease tensions and curb perceptions of bias, the Justice Department sends in two black professionals to handle the scene: Preston Terry (played by Stephan James), a young, by-the-book special prosecutor, and Ashe Akino (played by Sanaa Lathan), a seasoned investigator.

The shooting draws the attention of the governor (Helen Hunt), an opportunistic private-prison investor (Richard Dreyfuss) and the national media. But little to no attention had been paid to the earlier incident, when a black teenager was gunned down by a white officer.

In “Shots Fired,” the relationship between the two deaths is the mystery; the disparity between them is the message. Though the cases balance each other out, the premise is risky, because there is not exactly an epidemic of black officers shooting unarmed white men. But as narrative strategy, the role reversal proves remarkably potent, adding a layer to the show’s themes of racial identity.

Reggie Rock Bythewood and Gina Prince-Bythewood, the creators of “Shots Fired,” are delving into an issue that rose onto the national scene when George Zimmerman was charged — and acquitted — in the killing of black teenager Trayvon Martin.

“We wanted to give people who don’t normally deal with police shootings of unarmed citizens (the chance to) empathize, because the victim looks like them,” Prince-Bythewood says. “We found it fascinating and troubling that, after and during the Zimmerman trial, Trayvon was being demonized and Zimmerman was suddenly the victim — that there were a large number of people sending donations to Zimmerman. That’s where the empathy was going.

“We wanted to attack that head-on,” she says, “but we also, in dealing with the two murders, we were also able to tackle the way that the community, the media, law enforcement and the justice system deal with cases based on race.”