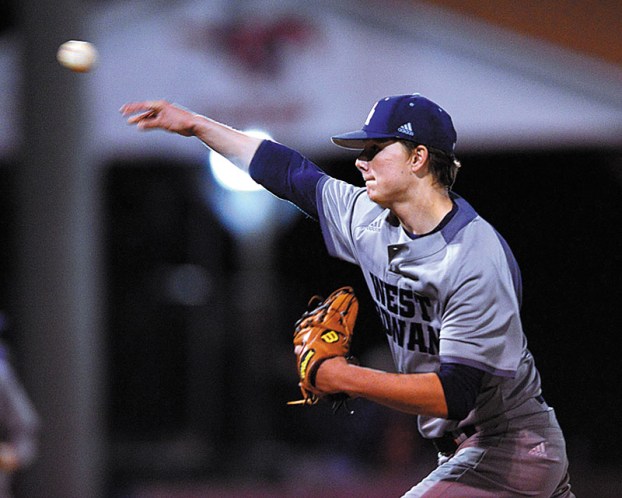 The Falcons intend to stick around in the SPC race after outlasting host East Rowan, 4-1, in a game that had more twists and turns than a New York cab ride.

“Baseball’s got a funny way of working out,” coach Seth Graham said after West (5-3, 3-3) scored three unearned runs in the top of the 14th inning. “We caught a break tonight. In games like that I think the first team that catches a break is going to come out on top.”

West never trailed in a game that was still scoreless after 12 innings. Each team recorded 19 strikeouts, with East starter John Owen ringing up 13 batters in eight innings.

“All my pitches were working,” said Owen, who was removed after throwing 107 pitches. “And even though we lost, we’re still in a good place. We’ll be able to bounce back. That’s what East Rowan has always been about.”

Owen retired 16 consecutive batters between the second and seventh innings, but was matched zero-for-zero by West starting pitcher Olen Stamper. The junior right-hander turned his first start into a showcase performance by scattering three hits in seven innings, fanning eight and retiring 15 of 16 batters during one stretch.

“I was pumped up,” he said afterward. “But I’m just happy we found a way to win. This keeps us going.”

East coach Brian Hightower praised both teams after the Mustangs (5-3 overall) fell to 4-2 in the conference.

“Great pitching and great defense, all the way through until the 14th,” he said. “We had a couple opportunities earlier in the game, but you can’t be a Monday night quarterback. In the whole scheme of things, it was a great Rowan County baseball game, typical of what happens around here.”

West scored the game’s first run with two outs in the top of the 13th inning. With Logan Sproul on third base, infielder Austin Love whipped an 0-2 pitch from East reliever Colby Myrick down the left-field line for an RBI-double.

“I knew he wasn’t going to give me anything to hit,” Love said after going 4-for-6. “I was just trying to put the ball in play somewhere. The way the game was going, I was hoping one run would win it.”

It didn’t. East, which managed only five hits through 12 innings, got back-to-back doubles from Bryson Wagner and Chandler Blackwelder against winning pitcher Brett Graham in the last of the 13th. An intentional walk and a fielder’s choice left two runners in scoring position with two away before Graham escaped by striking out Will Brown.

“We should have scored another run in the 13th,” Hightower said. “First and third with one out — it would have been nice to win it right there. We didn’t get the hit when we needed it.”

West didn’t either, but the Falcons capitalized on three East errors in the final inning. Facing Corbin Moss, West’s Trevor Atwood reached on a leadoff error and Pearce Wilhelm was hit by a pitch. Both runners advanced on a none-out wild pitch, forcing East to bring its infield in. That brought up Stamper, who had re-entered the game as a third-baseman. He hoisted a routine fly ball into medium right field that Owen lined up for what should have been an easy catch. Instead, the ball deflected off his glove for a two-run error.

“With runners at second and third, I was just trying to hit something backside,” Stamper said. “I wanted to get it past their infield, trying to lift it. It was surprised me when he dropped it. I thought for sure it was going to be a sacrifice fly.”

Owen, to his credit, offered no excuses. “I just missed it,” he said. “I’d already thrown a hundred-and-something pitches, and I wanted to catch it and throw it home as hard as I could. But you’ve got to get the first out first. I was looking too far ahead.”

Which left the Falcons looking to stay on the SPC radar screen.

“It’s a game we needed,” Love said. “Knocking off one of the top teams in the conference can only boost your confidence. This will get us going.”

NOTES: Stamper scored the game’s final run on an infield error, East’s fifth of the game. … The Mustangs did not issue a walk, though Myrick and Moss each hit a batter. Owen struck out seven straight batters, beginning with Jake Perez in the second inning and finishing with Atwood in the fourth. … Both teams plays SPC games on Wednesday. West travels to Concord while East plays the second of three home games this week when Robinson visits.