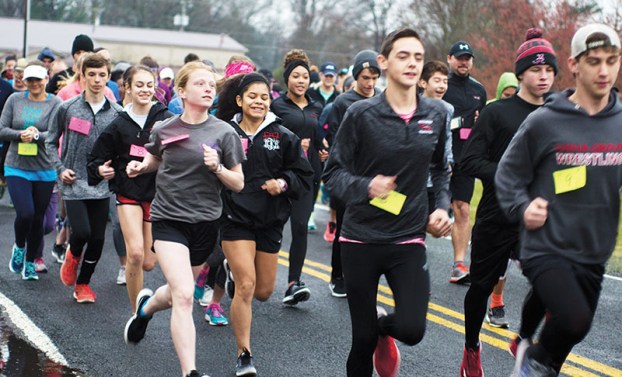 KRISTI CRAVEN/ SALISBURY POST People run either a 5K or 10K at the 4th Annual Love Thy Neighbor Benefit to raise money for Zach Thompson and his family at Concordia Lutheran Church in China Grove on March 18, 2017.

CHINA GROVE —  Zach Thompson came out of the pouring rain Saturday morning giving out high fives freely to whomever had a hand out. He walked down the hallway of Concordia Lutheran Church, headed to its fellowship hall where hundreds of people where there because of him.

Thompson, who is an instructor with the Communications Academy at South Rowan High, was diagnosed in the fall of 2016 with a glioblastoma, a highly cancerous tumor. He’d begun having severe headaches in August of that year, and a CT scan would reveal a baseball-sized mass on his brain.

Doctors removed the mass and discovered the type of brain cancer Thompson had, which was followed up by rounds of chemotherapy and radiation. Concordia Lutheran Church, along with Trinity Lutheran Church, planned a community breakfast, 5K and 10K runs, a silent auction and LuLaRoe clothing sale on Saturday to benefit Thompson and his family. The family were the fourth recipients of the Love Thy Neighbor fundraising benefit.

Zach, a Rowan County native, and his wife, Cassie, along with their three children — daughter, Ruby, twins Brooks and Parker — were on the hearts and minds of the churches and volunteers. Organizers said God kept leading them to help the family.

“The closer I grow with my relationship with God, the more I know he’s been here all along,” Zach said.

He said his Sunday School class has been reading the Bible story of Daniel, the courage he showed in the Lion’s den and his faith in the Lord. The class has also been discussing the three men thrown into the fiery furnace by the King of Babylon.

In that story and others, Thompson said he’s reminded to “above all love each other deeply and that love can cover a multitude of sins.”

He said he’s asked often how he can believe in a God who would allow him to go through this illness, and he tells them that Jesus is the one who took on the suffering of his people.

Cassie said there are people undergoing treatments at the cancer center who are dealing with much more than they are and who don’t have the support they have.

“For us to have the support, we feel loved,” Cassie said.

The event “shows how kind people are,” she said.

Cassie has said her husband is a private person and he’s struggled with letting people in on this part of their lives, but on Saturday she said they’ve realized they “have to let God use other people to help.”

The couple wished they could thank everyone individually who has ever done anything for them.

“I’m praying for you,” a woman who didn’t even know the couple said as she left the breakfast. “Thank you,” was the response from Zach and Cassie.

The Thompsons attend Stallings Baptist Church where Zach is a deacon and Sunday School teacher.

“We have just been overwhelmed at the generosity and kindness of people. The support means a lot to him,” said Pam Safrit, Cassie Thompson’s mother.

Safrit along with her husband and other relatives attended the breakfast, in which the Starnes family provided all of the cooking.

Safrit at one point was lost for words, finally concluding that “God just works through so many people,” she said.

Crystal Karriker said that because so many items were donated, it allowed more of the proceeds to go the Thompsons.

The first year organizers were able to raise over $7,000 for a woman who was also diagnosed with a brain tumor, and in subsequent years they’ve been able to raise even more for families. Karriker said at the end of the day its not even about how much is raised for the Thompsons — it’s about all of the people who have been touched by their lives and wanted to give back to them.

“Mr. Thompson is an inspirational teacher who went through something and overcame it,” said Malaki Littlejohn, 17, a student at South Rowan High.

“It was a great experience. I came out here and did it for the love of our teacher,” Littlejohn said.

Corey Snodgrass called Thompson strong for bouncing back from chemotherapy and radiation treatments and then returning to teach. The 15-year-old is also a student at South Rowan High.

No matter whether Thompson knows all of the students individually he still greets them with a warm smile, said Jalee Rollins.

All of the students participated in the 5K and 10K non-competitive races. No prizes or T-shirts were given to race participants, but the top overall finishers did receive trophies created by Russell Foster.

Stacie Walters is a LuLaRoe consultant connected with the online and pop-up clothing company, who agreed to match the funds raised by sales for the day. Walters enlisted consultants Kristen Carriker, Buffy Marlowe and Mackenzie Morgan to sell pieces, with the proceeds going to the Thompsons.

“The Thompsons have given so much to our children,” Walters said.

Cassie Thompson is an adviser for the student council, which Walters’ daughter is a part of, she said.

“They are a great family. It makes us feel good to be able to help,” Walters said.

Marlowe said the Thompsons were an awesome family and she believed if the tables were turned they would do the same for her.

The women began selling pieces the night before to the teachers at Morgan Elementary School where Cassie is a reading design coach.

Zach Thompson is still part of a clinical trial at the Preston Robert Tisch Brain Tumor Center at Duke University Medical Center in Durham. He’s undergoing immuno-therapy and has chemotherapy cycles every few weeks. He’ll start a new five-day cycle on Wednesday. His chemo is in pill form and he’ll have periodic MRIs.

Thompson has had two MRIs since he went on the first round of chemo, which coincided with radiation treatments.

“They said it looked the same. There’s no re-growth of a large mass. We pray those same results continue to come,” Thompson said. “We’re praying that God’s using the doctors and medicine for his healing.”

While acknowledging he has “ups and downs, good days and bad days like anybody,” Thompson said, “I’ll keep praying and fighting.”

By Wayne Hinshaw For the Salisbury Post A fashion show with an emphasis on  diversity was held at the Spencer Women’s... read more