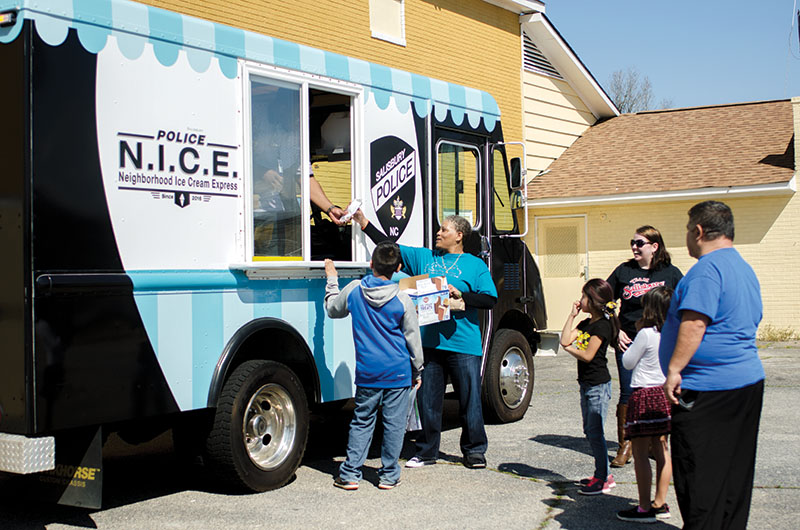 SALISBURY — Veronica Tellez sat at a table underneath an umbrella with her oldest son, Kaiden, while husband Jose held onto their other son Jayson as other children played soccer and adults rejoiced at winning door prizes. The young couple were among those in the small crowd who attended the first-ever Hispanic Coalition-sponsored information fair.

The Hispanic Coalition is a sub-committee of the Human Relations Council and held the event Saturday in the parking lot of Iglesia Monte Sinai church, 1010 Airport Road. It was a way for the Hispanic community to learn about services that the city of Salisbury provides and about its agencies.

“I think it’s good to bring people together,” Veronica said.

There are 14 to 17 predominantly Hispanic congregations in Rowan County, said Liliana Spears, co-owner of Latin Mix store and salon, and they reached out to those congregations about the free event. Spears is also chair of the Salisbury-Rowan Latino Coalition, a subdivision of the Human Relations Council. She was instrumental in coordinating the event and helping to spread the word to area churches.

“It’s very good because it lets us in the Spanish community know that we can have communion, get together in the city,” said Jose Colocho, pastor of Esperanza Al Mundo.

He said he thanks the city of Salisbury for the opportunity to hold such an event and would like to see more programs geared toward the Hispanic community.

“More programs will help so that they could get more comfortable with the city and break some of the differences that exist with language barriers and some of the customs that are so different,” Colocho said.

It is his hope that the divisions will disappear and people will understand “we are human beings and are all alike.”

The truth is that many people are fearful, said Evelyn Medina, co-owner of Medina Construction and owner of Mean Mug Coffee. “With all of the political tension, people are scared to go out to the parks. Kids with immigrant parents are less likely to participate in activities like Boy Scouts and until we gain their trust they won’t come, but this is the first step in letting them know we support them, love them, welcome them in the city.”

She said as a Latin community there is a lot to offer.

Andrea Mohammad, a member of Milford Hills United Methodist Church, brought some donated clothing items, snacks, diapers and hygiene products that were collected by her and other members.

She said the items that were donated are mostly items that people may struggle to provide for their families. Mohammad, along with her husband, Qasim, and their children Layla and Jacob, set up a table at the event. The children played soccer with others who attended.

“It’s a great opportunity for us as city employees to be amongst our citizens, enjoying them and them enjoying us,” said Jennifer Silvia.

The event is one of many events leading up to the annual La Fiesta De Rowan, an event in September that shares aspects of the Hispanic culture while showcasing Spanish food, music, dance and fun activities for children.

“The idea is to have different events in different locations in the city and to engage with the community out here,” said Souwan Kiengkham, who is also with the city of Salisbury.

Jennifer Nicholson, a youth service supervisor at the Rowan Public Library, also brought reading material and activities for children. Her goal was to talk to parents and children about the events going on for the rest of the month and later in the year at the library.