Thanks to her mom, Charlotte Corriher tackles marathons in style 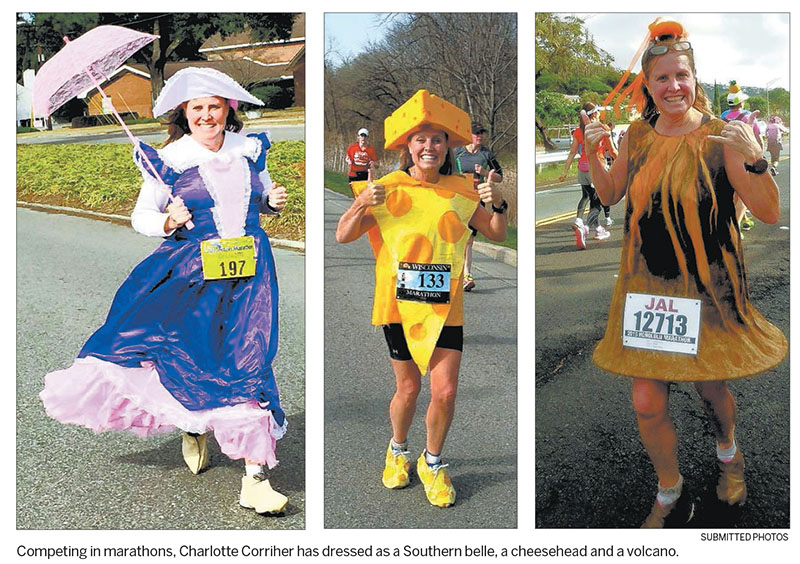 Competing in marathons, Charlotte Corriher has dressed as a Southern belle, a cheesehead and a volcano.

To say Charlotte Corriher is going to run in her 100th marathon this coming Saturday is impressive enough.

She didn’t start running until she was 35, and it was only in 2006 when she completed her first marathon. “It started just as a way to keep in shape,” she recalls.

Corriher had never run competitively or otherwise in high school or college and says most of her friends from school days probably wouldn’t believe, except for keeping up with her on social media, what she has accomplished.

Sometime in 2018, with a marathon in Kansas, she will enter another exclusive club of having run marathons in all 50 states.

But there’s significantly more to Charlotte’s running story, and it has to do with her mother, Kay Corriher, living back in her hometown of Landis. Kay maintains a keen interest in where her daughter’s next marathon is because usually she is creating and sewing a new costume for Charlotte to wear.

It has become Charlotte’s thing, so to speak.

In a Maryland marathon, she dressed as a crab; in Maine, a lobster; in Iowa, a corn stalk; in Arizona, a cactus; in Kentucky, a jockey.

Out in Hawaii last December, Charlotte competed as a volcano, and she was a drive-in soda hop for the Route 66 Marathon in Tulsa, Okla.

“She tells me what she wants, and between the two of us we come up with it,” Kay says.

Corriher wore a cheesehead as part of her cheese-themed costume in Wisconsin. Whenever she runs a marathon in Charleston, S.C., where she now lives and works, Charlotte dons an antebellum Southern belle costume, complete with a hoop skirt and parasol.

For one of Charlotte’s birthdays, which fell during the Little Rock Marathon in Arkansas in 2013, Kay Corriher made her daughter a three-tiered birthday cake to wear. “That was one of the hardest,” Kay says.

Charlotte also acknowledges it was one of the toughest costumes to run in.

“The Wizard of Oz” is Charlotte’s favorite movie, so for her milestone marathon next year in Kansas, she and her mother will go all out, maybe with four different costumes over the length of the entire course.

Kay is thinking about starting her daughter in a black-and-white version of Dorothy, because the movie began in black and white and didn’t change to color until Dorothy’s tornado-blown house landed in Munchkin land.

By the end of the marathon, Charlotte will be the color version of Dorothy with maybe some Scarecrow and Cowardly Lion fashions in between. The whole thing is still in the planning stages, but Kay thinks she has a line on “red, sparkling booties.”

An outstanding seamstress and well known for her work at Fabric Warehouse, Kay already has begun sewing a dalmatian costume for Charlotte’s 101st marathon — you know, in honor of “101 Dalmatians.”

She graduated in 1986 from South Rowan High School, and thinking she might someday want to be a veterinarian, Charlotte majored in zoology at N.C. State University, graduating in 1990.

But she never pursued the veterinary ambitions. She lived in Raleigh 16 years; in Wilmington, 14 years; in the Florida Keys, a year; and she has been in Charleston ever since.

Corriher belongs to the Charleston Beer Runners group and keeps up with her many marathon friends across the country on a social network called Marathon Maniacs.

The Maniacs help each other out on what races to schedule, what to do in those locations and where to stay. Fellow marathon runners have come to look forward to what Charlotte will be wearing for each event.

Corriher will be the first to tell you she is not a fast runner, and her times suffer even more because people are stopping her along the route for photos. Her best time for a marathon is 4 hours, 13 minutes, which she recorded in the Wrightsville Beach Marathon, the one that will be her 100th this Saturday.

Charlotte already has run the Wrightsville Beach event seven times, as she has the Charleston marathon.

For Saturday’s run — a marathon covers 26.2 miles — Kay Corriher is making a running dress for her daughter, and Charlotte plans to meld into the fabric photographs from her 99 previous marathons.

Kay laughs, remembering that for the 99th marathon, which was run in Myrtle Beach just recently, Charlotte’s costume included 99 beer labels to reflect the old song “99 Bottles of Beer on the Wall.”

Charlotte Corriher ran her first marathon in January 2006 at Walt Disney World, and she was hooked.

“It was immediately, ‘When’s my next one?'” she says. “It was more fun than exhausting. I was at Disney World and with girlfriends I had trained with, and it was just pure adrenalin.”

In the beginning, Charlotte was running marathons as part of the Team in Training program, whose participants raised money in every race for the Leukemia and Lymphoma Society. She ran for that program for five years, but eventually tired of constantly asking people for support.

The costume part of her experiences started with her fourth marathon in Virginia Beach, Va. — the Shamrock Marathon for which she dressed as a leprechaun with her mother’s help.

Because of her slow times, Charlotte doesn’t qualify for the Boston Marathon, but she has run in the Marine Corps Marathon in Washington, D.C., and the New York City and Honolulu marathons.

For the Philadelphia marathon, she dressed as Sylvester Stallone’s boxer, Rocky.

“Keep in mind, I’m not fast,” she says, “but that was just an easy way to check off three states in one trip.”

Corriher goes by the nickname “Shotzie,” a term of endearment given to her by father Fred, who lives in Salisbury. She says she runs three to five miles a day during the work week, then goes on longer runs over the weekends.

Running as many marathons as she does also helps in the constant training. Part of her post-marathon routine is to eat french fries and Rice Krispie treats, and she makes sure to call Kay Corriher with a report on how the race went.

“She loves it,” Charlotte says. “The first thing she asks is, ‘How did everybody like your costume?’ not ‘How did you do?'”

Kay says she has been sewing most of her life, ever since she received a sewing bag in Girl Scouts. She keeps a scrapbook of photographs with all of Charlotte’s marathon costumes.

Kay and Charlotte will be traveling together in August for a marathon in Alaska. To reach 49 out of 50 states by the end of the year, Charlotte plans to tick off marathons in North Dakota, South Dakota, Montana and Alaska in 2017.

And after the Kansas marathon next year, Charlotte intends to keep on going, as long as her body allows. She’s already thinking about covering the 50 states again with new costume ideas.

“Don’t tell my mother that,” she says.

Beyond marathons, Charlotte also is considering getting into 50-mile runs, 100-kilometer events and 100-milers.

“Definitely, don’t tell my mother that,” she says again.