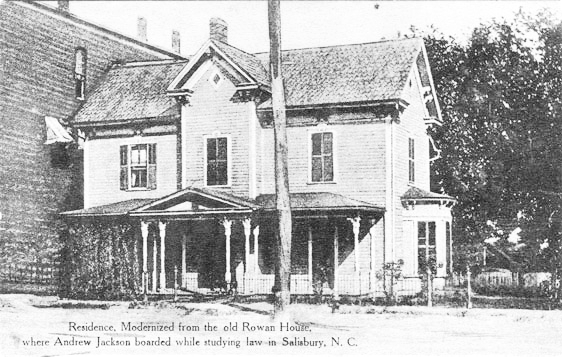 Presidential lore: Andrew Jackson and the Crawford family of Salisbury

The year 2017 will be the 250th anniversary of the birth of Andrew Jackson. In celebration of that event, the circumstances surrounding Andrew Jackson’s arrival in Salisbury are of increased interest. The connection of Jackson to the Crawford family of Salisbury is a story which begins in the Waxhaw area of the Carolinas.

During my employment with Dr. Rob Crawford, a local ophthalmologist, I have learned some of the stories of his family that had been passed from generation to generation. The stories seemed remarkable, and I had to learn more. The family lore included the loss of a corpse, Andrew Jackson being raised in the Crawford household and a Scottish rite that was so ghastly Salisbury’s own Archibald Henderson took note and wrote of it.

In February 1767, Andrew Jackson Sr. was clearing land for a home site  in the Waxhaw area when he became ill, possibly from a rupture caused by straining to lift logs, and he died that evening. At the time of his death, he and his wife, Elizabeth Hutchinson Jackson, had two sons, Hugh and Robert, and Elizabeth was expecting another child who would later become the seventh president of the United States.

Andrew Jackson Sr. had no immediate relatives in the area but Elizabeth Hutchinson Jackson had sisters who included Margaret Hutchinson McCamie and Jane Hutchinson Crawford.

Neighbors were notified of the death and, as was the custom at that time, friends and relatives came to assist the widow and to sit up with the corpse through the night. In the somberness of the occasion, stories were told and alcohol was served.

The next morning the dead body was wrapped and tied to a type of sled pulled by horses, and the journey to the burial site at the Old Waxhaw church in Lancaster, S.C., began. There was ice and snow, and travel was difficult. There were no roads, only paths through the woods.

They stopped along the way at the McCamie house and then at the James Crawford house to warm themselves and fortify themselves with more whiskey.

After about 12 miles of travel in the ice and snow and plenty of alcohol for warmth, they arrived at the Old Waxhaw Church, where the Rev. William Richardson was prepared to perform the burial service. To their dismay, somehow the corpse had come loose and was gone. The pallbearers retraced their path and found the corpse on the bank of one of the creeks they crossed. The body was retrieved, and the burial of Andrew Jackson Sr. took place at the churchyard.

Because of her pregnancy the widow was unable to return to her cabin. To prepare for the birth, she and her two sons moved into the home of her sister Jane, who was married to James Crawford. James Crawford’s wife was an invalid, and she welcomed her sister to live with her and perform household duties and assist with the raising of her own children. The baby was born March 15, 1767, in the Crawford home, and was named Andrew Jackson Jr. after his deceased father.  The location of Andrew Jackson State Park in Lancaster was selected because it was the property of James Crawford where Andrew Jackson was born.

Andrew Jackson’s childhood was spent living between the households of his uncles, James Crawford and Major Robert Crawford. Due to the illness of Uncle James, he settled into life with Uncle Robert. Robert is credited with giving Andrew his first gun and contributing to his love of horses. Jackson became acquainted with what was likely the finest horse in the Waxhaws — his Uncle Robert’s pedigreed gelding.

The Revolutionary War began in 1775, and many Waxhaw-area men joined the military to fight the British. In 1779, William R. Davie returned to the area. He was now a lieutenant, in command of a North Carolina cavalry company. Jackson, who had volunteered for the local militia when he was only 13, was captured, and he holds the distinction of being the only president of the United States to ever be held captive as a prisoner of war.

Davie was a frequent guest at Robert Crawford’s. During the war, they discussed planning operations and strategy. Jackson observed firsthand discussions of the war taking place all around him. This would be basic training for his illustrious military career.

William R. Davie had been brought to the United States from England by his parents to live with the uncle for whom he was named, the Rev. William Richardson of the Old Waxhaw Church. The church was a dominant presence in the lives of all who lived in this community. Eventually, the decision had to be made as to where to educate Davie. We know that Davie was sent to Salisbury to study under Spruce Macay. Macay had prepared for college under the Rev. David Caldwell at the Log College in Guilford County, and he then graduated from the College of New Jersey, which is now known as Princeton.

The untimely death of the Rev. William Richardson on July 20, 1771, gives much insight into the backwoods area and the superstitions of many of the people who lived there. Richardson was discovered by his wife in a kneeling position with a bridle around his neck. The man was buried, but many in the community had suspicions about the death, believing that there was some type of witchcraft or evil doings involved the death.

About a year later, a group from the community exhumed and opened the coffin of Reverend Richardson. His remains were exposed, and the hand of his widow, Agnes Nancy Richardson, was forcibly held against the skull of her long-deceased husband. An old Scottish belief was that blood would flow from the fingers of a murderer. No blood was seen, and the widow was not prosecuted for murder. This rite was called the Ordeal of Touch, and it is believed that this was the last time it was ever used in the United States. It is unknown whether the 15-year-old William Davie was in attendance during this incident. Salisbury’s own Archibald Henderson researched and wrote of the incident: “In a ghastly tribunal, as primitive in its unholy superstition as any ancient Druidic rite, she (the widow) was compelled by the church authorities to touch the forehead of the skull. The bleeding of her finger would be the divinely appointed proof of her guilt. Soon afterwards she was married to one George Dunlap, but a cloud of suspicion shadowed the remainder of her life.”

Richardson was reburied. Years later, his body would be exhumed and moved into an enclosure designed for William R. Davie and his family. Pastor Richardson has been buried at the Old Waxhaw church three times.

After Davie was sent to Salisbury to study law under Spruce Macay, he fought in the Revolutionary War with distinction, began a law practice in Halifax and served as our delegate to the Constitutional Convention. Due to Davie’s accomplishments, Major Robert Crawford was impressed with Spruce Macay’s educational abilities, and he had two young men who needed education and guidance. They were his son, Will Crawford, and his nephew, Andrew Jackson.

He also wanted to distance his own daughter, Mary, from Andrew. Jackson had taken an interest in the most attractive young lady, and Major Robert looked at this relationship with disfavor.

Mary  Crawford was Jackson’s first love. It is said that Mary and Andrew had a tender parting on the bank of the Catawba River. Mary eventually married Dr. Samuel Dunlap, and Jackson went married Rachel Donelson Robards. Andrew Jackson left the area of the Waxhaws at the age of 17 and never returned. However, many years later, while he was president of the United States and a widower, he sent a gift to Mary by messenger. It was a commemorative silver-lined snuff box along with a note including the words: “begs leave to assure her that the length of time, the nights of toil and watchfulness, the imminent danger and serious privations and vicissitudes through which he has passed have not banished from his mind the endearing recollection of the pleasure he enjoyed in his boyhood in the agreeable society of herself and her family.”

This snuff box is engraved “Jan. 8, 1815” commemorating Jackson’s New Orleans victory. It also bears the notation “U.S.F. Brandywine, 1828” designating the ship the donor was stationed on and the year it was made. Inside the lid is “To A. Jackson from D. M. Stokes.” D.M. Stokes is David Montford Stokes, son of Montford Stokes who served as governor of North Carolina. When Jackson studied law in Salisbury, he met David Stokes, five years his senior. This snuff box is now owned by the Lancaster County Historical Commission and is housed at the South Carolina State Archives in Columbia.

Hendrik Booraem, who wrote “Young Hickory” — considered the most authoritative book on Jackson’s youth — said: “Davie’s success was another inducement to study law. The young major’s career proved that a boy could leave the Waxhaws and do well. He had become a lawyer, won fame in the war (he was now actually Colonel Davie), married the niece of Willie Jones, one of the most powerful lawyers in North Carolina, and lived in a fine house in Halifax.”

Jackson’s old friend from Guilford, John McNairy, also studied with Macay. Jackson, Crawford and McNairy roomed together at the Rowan House. The three were known as wild and irresponsible law students. These three were full of mischief and perpetrated pranks around Salisbury but they all went on to professional careers.

McNairy learned of a position as a judge in what was called the Cumberland settlements, and he decided to attempt to get this post. McNairy was appointed judge, and later used this judicial power to appoint Jackson as state’s attorney for the district.

Jackson traveled to Jonesborough and began working as a prosecuting attorney in the area now known as Nashville, Tennessee. Through his military genius, he earned the title of general. Jackson preferred to be called General Jackson even after serving as president of the United States. He stated that “they’ll let just anyone be president.”

William Dunlap Crawford married Mary Phifer, the daughter of Col. Martin Phifer and Elizabeth Locke. He was employed as an attorney in Salisbury. Descendants of Will Crawford have lived in Salisbury ever since. And all that remarkable family lore has proven to be true.

By Cal Thomas Readers of a certain age may recall ads for Ivory Soap, which claimed to be 99 and... read more