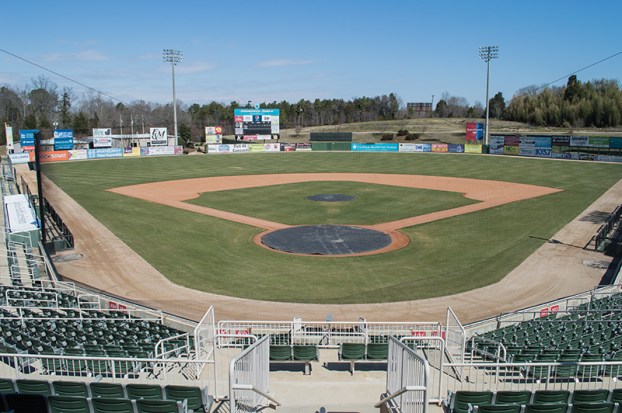 Josh Bergeron / Salisbury Post - The Kannapolis Intimidators Stadium near I-85 was first built in the mid 1990s. Today, members of the Kannapolis City Council hope to build a new stadium in downtown, leaving the future of the old ballpark undecided. A rendering of a proposed baseball stadium in downtown Kannapolis.

KANNAPOLIS — As the City Council eagerly plans a $37 million baseball stadium in downtown, the fate of an existing stadium remains unclear.

For more than a year, Kannapolis City Council members have tossed around the idea of building a baseball stadium in downtown. In recent months, ideas became plans when the City Council approved downtown layouts and designs for a new stadium that’s estimated to cost $37 million. The new stadium could be the “game changer” for downtown development, council members say.

In February, City Manager Mike Legg compared the stadium to anchor stores in a mall. Like a major department store, the baseball stadium might draw restaurants and retail stores to downtown Kannapolis.

By pursuing a downtown stadium, however, Kannapolis has decided to abandon a facility for which the city still owes $2.8 million to Rowan County. Under the current schedule, Kannapolis won’t pay off its stadium debt until April 2061.

City Manager Mike Legg and Mayor Darrell Hinnant say Kannapolis could pay off debt with any money it receives from selling the existing stadium. Kannapolis will “always honor debt in the future,” Hinnant said. However, council members haven’t quite decided what to do with the Intimidators’ stadium, which it purchased from Rowan County in 2011.

“I think we’re all actively looking at it to decide on the highest and best use,” Hinnant said. “I don’t think it’s appropriate to say we’re sitting on our haunches. We just haven’t reached the right answer yet.”

It wasn’t long after a group of Kannapolis business leaders first pitched the idea of a baseball stadium in the city that it attracted controversy.

In July 1994, Cabarrus County chose not to support a baseball stadium estimated to cost several million dollars at the time. Kannapolis pitched in financially. It was Rowan County government, however, that shouldered most of the financial burden. Cost overruns turned a $5 million, public-private partnership into a $6.5 million endeavor that was mostly public. Rowan County’s financial obligation increased from $1.5 million to more than $4 million. The total price eventually settled at $7.3 million.

For years, the stadium influenced elections and influenced local government decisions. Financing details of the stadium’s construction even led some to avoid attending games.

The minor league baseball team started as the Piedmont Phillies and initially was an affiliate of the Philadelphia Phillies. It later became the Piedmont Boll Weevils.

After years mired in controversy, the Kannapolis team’s future looked bright in 2000, when NASCAR legend Dale Earnhardt purchased a share of the ownership. The team’s name changed to the Kannapolis Intimidators, which resonated well with fans, and it became an affiliate of the Chicago White Sox. Before the 2001 season started, Earnhardt tragically died in an accident at the Daytona 500.

“I think his influence on the team and the stadium would have been greater than anything we can imagine,” Dayvault said about Earnhardt.

A change in ownership

Instead, Rowan County decided to sell its share of the stadium in 2011. The suitor? Kannapolis.

County Attorney Jay Dees said Rowan County commissioners at the time “just needed to get rid of this albatross and be done with it.”

Former Commissioner Jim Sides said the county “just wanted to be done with the liability.”

A councilman at the time, Hinnant called the interest-free purchase a rare opportunity.

Today, the Kannapolis City Council plans to build a minor league baseball stadium in downtown in time for the 2020 season. The Intimidators will play games at the existing facility until then.

If Kannapolis city leaders have a choice, the Intimidators Stadium probably won’t continue to host baseball games when the new stadium opens. In July 2016, former Rowan Works Economic Development Director Robert Van Geons proposed an idea that appears to be a favorite of some council members — an office park.

Because of watershed restrictions, development could not occur beyond the existing stadium property’s boundaries, Van Geons said during his 2016 presentation

Van Geons projected that an office park development could generate $375,000 in new property tax revenue. He said tax revenue could increase to about $560,000, depending on market demand.

The city hasn’t ruled out leaving the stadium as is or building a park on the site, but it’s an unlikely use, according to Legg and Hinnant.

Legg said a park may improve the quality of life for nearby residents, but it’s not the best financial use.

“Parks just have a limited revenue stream,” he said. “It’s not necessarily the best use.”

“I’m not hot on another office building,” he said. “I’d like it to somehow remain in our park system.”

Between the end of the 2019 season and the time Kannapolis finds a suitor, Dayvault said an interim use could be baseball or softball tournaments.

“I just don’t think we should let it sit out there and lay dormant,” Dayvault said.

Whatever the solution, Wilson said he’d like to see more public conversation among council members about the future of the existing stadium.

To date, Kannapolis has mostly focused on its plans to redevelop downtown, instead of finding a use for the old stadium.

In 2015, Kannapolis  purchased its own downtown. In the following months, city staff and elected leaders drafted and approved plans for what a revitalized downtown would look like.

Designs for the new stadium include a long list of items not found in the existing facility, including: rocking chair seating, an outdoor bar, a party deck, grassy seating areas and restaurants overlooking the outfield.

In order to open the stadium by the 2020 baseball season, Legg says construction needs to start in 18 months.

By Josh Bergeron josh.bergeron@salisburypost.com SALISBURY — For the second time, attorneys in Rowan County’s prayer lawsuit will be in federal court... read more