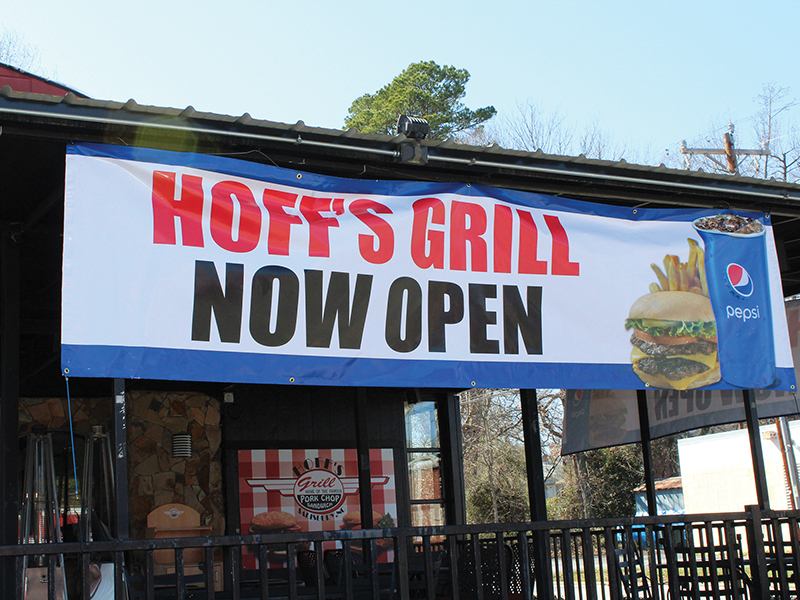 The restaurant is owned and operated by Dave Arey and Larry Hoffner. They brought Hoff’s Grill to Salisbury in March of 2014, some time following the sale of their own respective businesses. Arey previously owned High Rock Boat and Ski Club, and Hoffner owned Hoff’s Grill in Lexington.

Hoffner said the West Innes location has tremendously helped with the eatery’s exposure.

“Back behind Tokyo Express, no one knew we were there except people who had been in before,” said Hoffner. “All around it’s just so much better for us.”

The new building doubles Hoff’s indoor seating area from a tight 25 to a more comfortable 50. Its covered patio can seat an additional 40.

Waitstaff said that additional parking has been a tremendous benefit as well.

“When business people need to come and go on their lunch break, they don’t want to take 15 minutes of their half hour walking,” said Jolene Houchins, a server who has been at Hoff’s Grill since it opened. On Long Street, the establishment had a minuscule three parking spots.

Customer traffic at the new location has yet been promising.

“The community has really, really supported us over here,” Houchins said. “Our regular customers have . . . shared us on Facebook and helped us out. We’ve had a lot of new faces, a lot of new customers that we’ve never had before.”

Staff attributes a large part of the restaurant’s popularity to its food. The menu is made up of Southern-diner cuisine, but at its best.

The famous Hoff’s Grill pork chop sandwich stars a hand-cut tenderloin, put through a tenderizer before being rolled in flour, dipped in batter and fried to perfection. This crispy tenderloin is served on a deli-style bun with the customer’s choice of toppings, and it’s large enough to be a meal by itself. Most patrons, however, pair it with Hoff’s well-liked batter-dipped french fries.

Another popular menu item is the smoked beef brisket. Slow-cooked for 12 to 14 hours, the meat is tender and juicy with just the right amount of char on the outside. Responsible for the brisket is Houchins’ husband, David.

“I think the reason this new area is so good is because we’re actually so diverse from what everyone else has,” said Savannah Shipton, a Hoff’s server for nearly two years. “When people found out we were going to be in front of Hendrix, they said ‘Well, aren’t you a lot like Hendrix?’ No! Yes, we have hamburgers and hotdogs, but they’re known for barbecue, we’re known for our pork chop.”