Cline column: A lost Blackmer film comes back to life 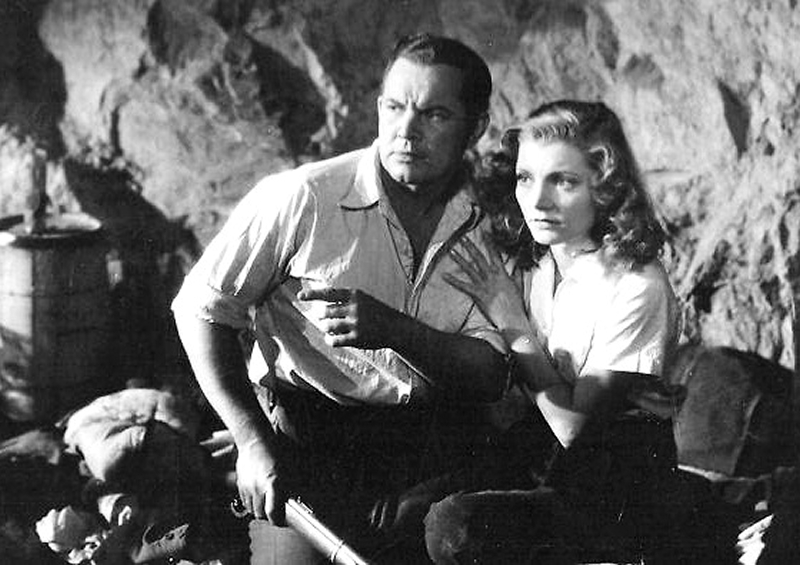 Photo courtesy of Mike Cline Sidney Blackmer, left, appears in a scene with costar Peggy Shannon in the 1938 movie 'Deluge.'

It’s always a glorious day when a movie, considered lost forever, turns up. Such an event occurred last year, and it involves a picture starring Salisbury’s own Sidney Blackmer.

But first, some background.

Lots of movies are lost. I’m not talking about a DVD of “La La Land.” I’m talking about the original camera negatives and all prints made from them. I’ve read numerous articles stating that 60 to 75 percent of all the silent movies and short subjects made are lost, mostly because of film decomposition.

Up until the early 1950s, movies were shot, then printed on nitrate film stock. Unfortunately, nitrate film was quite flammable (being essentially the same chemical formula as guncotton). It often decomposed after several decades, leaving the film sticky and goo-like, eventually turning to dust.

Most filmmakers and film owners didn’t have the foresight to take steps to preserve their film libraries (Charles Chaplin was an early exception.) The lifespan of a movie way back was roughly a year — time for the movie to play all the territories, then all the film prints were returned so they could be melted down for the silver content.

The negatives were still around for the most part, but poor storage of same led to quick demises of many titles.

The term “lost,” when it comes to movies isn’t always accurate. Sometime certain film titles disappear for other reasons. They still exist, but the film owner simply doesn’t want them to be exhibited. Alfred Hitchcock retained ownership of several of his features (“Rear Window” and “Vertigo,” for example). He locked them up for over a 20-year period.

The Irving Berlin estate (which maintained ownership of the music rights) kept “Annie Get Your Gun” out of release for decades. Movies such as this were never lost films, just not available to view.

Many, however, are truly lost forever. Dozens of Twentieth Century Fox features perished in a New Jersey nitrate storage vault fire circa 1938. Negatives and prints were stored together, and all were destroyed, including four of the popular Charlie Chan film series, which were produced less than seven years before. Eighty years later, no copies have turned up anywhere in the world.

“Deluge,” a 1933 production of RKO Radio Pictures, was  long considered a lost film.

It was one of the first disaster (not disastrous) movies to grace the silver screen, predating “San Francisco,” “The Hurricane,” “The Last Days of Pompeii” and “In Old Chicago.”

In “Deluge,” a series of earthquakes destroy the Pacific coast of the United States, causing a massive tsunami, which heads toward New York City, crushing everything in its path. “Deluge” was released the same year as RKO’s landmark “King Kong,” and you might notice the opening titles of “Deluge” make use of the same art deco graphics as “King Kong.”

An added bonus is that the male lead in “Deluge” is played by Salisbury’s Blackmer.

“Deluge” was a modest production with modest returns for RKO, so it was soon confined to the vault and forgotten. It was never re-released to theaters. Years passed, financial hardships hit hard, and in 1948 RKO was sold to new ownership — Howard Hughes.

Hughes, who had been producing features since the late 1920s, was known to go over budget on almost every movie he made, prohibiting the possibility of profits. So by the mid-fifties, he’d had enough and got out.

The existing real estate and standing studio ended up with Lucille Ball and Desi Arnaz (remember Desilu?). Hughes sold the RKO film library to General Tire and Rubber Company, which immediately licensed all of the movies to television stations.

“Deluge” certainly would have been included in the package, but it was nowhere to be found. It had vanished from storage vaults — no negatives, no prints. So TV audiences never saw “Deluge.”.

Oddly enough, RKO rival Republic Pictures bought, in 1937, the special effects sequences from the movie to use in several of its serials and features, so New York City being leveled by huge waves has always been out there. Too bad they didn’t purchase the entire feature: “Deluge” probably never would have vanished.

It wasn’t until 1981 when a print of the feature turned up in an Italian archive. Sadly, the print was badly beat up and had Italian subtitles stretching across the bottom of the frames from start to finish.

Some U.S. independent home video folks released it on VHS anyway. If you looked very closely, you could almost see Blackmer’s nose and eyes within his burnt face. The audio was poor, and there were those annoying subtitles.

And then just last year, film archivist Serge Bromberg (a longtime customer of mine when I licensed film footage) located the original 35 mm nitrate film elements including the English soundtrack.

Both were in remarkable condition. With the aid of the Library of Congress, a complete restoration was made, bringing it back to visual and audio glory movie audiences paid to see 84 years ago.