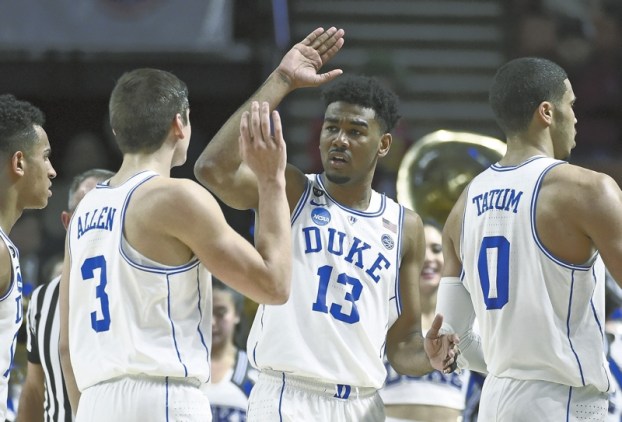 Duke's Matt Jones (13) celebrates with Grayson Allen (3) during the first half against Troy in a first-round game of the NCAA men's college basketball tournament in Greenville, S.C., Friday, March 17, 2017. (AP Photo/Rainier Ehrhardt)

GREENVILLE, S.C. (AP) — Grayson Allen had 21 points off five 3-pointers, Jayson Tatum had 18 points and 12 rebounds, and second-seeded Duke continued its perfect postseason with an 87-65 victory over Troy in the NCAA Tournament on Friday night to start the East Region.

The Blue Devils (29-7) became the first team to win four games on the way to the Atlantic Coast Conference Tournament crown last week. They kept up that pace in blowing past the 15th-seeded Trojans (22-15).

Duke will take on either No. 7 seed South Carolina or No. 10 seed Marquette and its coach, former Blue Devils point guard and assistant Steve Wojciechowski, on Sunday.

The Blue Devils improved to 34-7 all-time in openers and put this one out of reach early with their 3-point shooting.

Jordon Varnado had 18 points to lead Troy, which made its first NCAA appearance since 2003.

Duke, which averaged eight 3-pointers a game this season, hit 10 in the opening half to quickly pull away from the Trojans.  Tatum opened the game with a 3. A short time later, Frank Jackson, Luke Kennard and Matt Jones had long-range baskets on consecutive possessions as the Blue Devils jumped to a 16-4 lead less than 5 minutes in.

The lead shrunk to nine points in the second half, the final time at 59-50 on Wesley Person Jr.’s basket with 14:32 to go. But Jones and Allen followed with 3s and the Trojans (22-15) could not rally.

Duke finished with 13 3-pointers, its highest total in nine games since hitting the same amount in a win over Wake Forest on Feb. 18.

Jones finished with 14 points off three 3-pointers and Jackson 12 with two 3s. The Blue Devils’ outside touch offset the poor performance of leading scorer Kennard, who was just 3-of-12 shooting for eight points — snapping a streak of 19 games scoring in double figures.

Troy: If the Trojans were to challenge, they had to be on target from the outside. Instead, Troy went 5 of 23 from behind the arc.

Duke: If you looking for soft spot in this one for the Blue Devils, it was at the foul line where they went 16 of 23 (under 70 percent) and missed back-to-back 1-and-1 attempts in the second half.

Second-seeded Duke will face No. 7 seed South Carolina or No. 10 seed Marquette on Sunday.