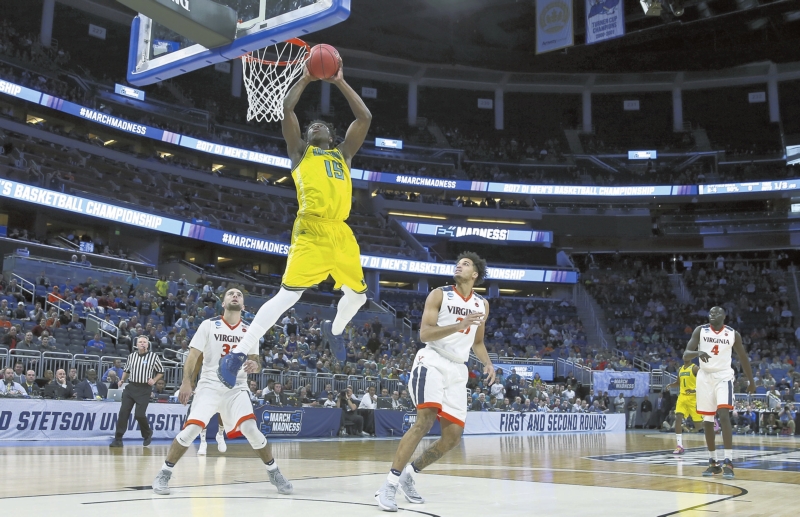 UNC Wilmington forward Devontae Cacok (15) goes up for a shot against Virginia during the first half of a first-round men's college basketball game in the NCAA Tournament, Thursday, March 16, 2017, in Orlando, Fla. (AP Photo/Gary McCullough)

London Perrantes scored 24 points, Marial Shayok added a career-high 23 off the bench and No. 5 seed Virginia rallied from 15 points down to beat 12th-seeded UNC Wilmington 76-71 in the opening round of the NCAA Tournament on Thursday.

Perrantes scored 19 points in the second half as the Cavaliers (23-10) got their slow-paced offense going. His biggest bucket was a driving bank shot with 1:37 remaining, which put the Cavs up 71-66.

UNCW (29-6) wouldn’t go away, though. Chris Flemmings drained a 3-pointer from the elbow and then Devontae Cacok hit a layup to make it 73-71 with less than a minute to play. But Shayok answered on the other end, banking in a runner that gave the Cavs some breathing room in the closing seconds.

“I just wanted to provide energy off the slow start,” Shayok said. “Personally, I just didn’t want to go out like that, and I knew my teammates didn’t either. So I just wanted to come out and provide what I could on both ends and just bring a spark.”

Virginia advanced past the first round for the fourth consecutive year and won as a No. 5 seed for the first time in four tries. The Cavs can thank Perrantes and Shayok for making it happen.

Perrantes was 9-of-14 shooting, and Shayok was 8 of 14. The guard duo set the pace late after Virginia trailed big.

The Cavaliers closed the first half with a 16-1 run that erased the double-digit deficit.

“In the game we tried everything to stop their run,” UNCW guard Ambrose Mosley said. “It’s hard because you want to win every game; especially having an easy lead like we did in the first half.”

UNCW was nearly perfect early, with Mosley, Denzel Ingram and Cacok hitting every shot they took.

The result was a 15-point lead for the Seahawks. They controlled tempo, were seemingly first to every loose ball and looked like they would become the latest No. 12 seed to win in the opening round of the NCAA Tournament.

But Perrantes and Shayok didn’t let it happen again.