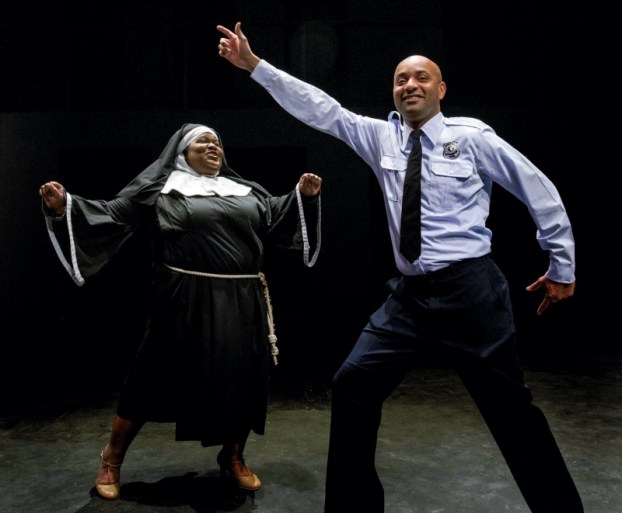 ‘Sister Act’ a fun night of song and dance

For a good time, call Deloris Van Cartier and her sisters. They will entertain you with song and dance all night long, then return to their cells in the convent.

Piedmont Players’ production of “Sister Act” is a rollicking night of smiling faces, positive messages and a slew of great voices.

The large opening-night audience burst into applause after the musical numbers and at other times when their funny bones got tickled. Everyone was having fun — cast, musicians and audience.

High praises go to Alexis Greer, who’s got the voice but also has developed into a nice actress. She’s got her timing right to get the laughs, and that is something you have to learn.

The other fantastic voice belongs to Cortlyn Kerns, who plays novice nun Sister Mary Robert. Kerns’ impressive vocal range and power nearly took the house down with “The Life I Never Led,” and she was a standout in all the music. She has an appealing personality, too, so she was just right for the young nun.

Mother Superior Corinne Mauldin is perfect for the role, too — stern, solid, funny and with another great voice. The audience loved her number “Haven’t Got a Prayer.” She plays the part with compassion and humor.

Lisa Matthews is the bubbly Sister Mary Patrick, adding another hint of humor. And speaking of humor, Barrie Kirby is hilarious as addled Sister Mary Martin-of-Tours, the breezily off-kilter sister who says the funniest things. Kirby is a Presbyterian minister in real life, which adds to her appeal as a nun.

Robin Rogers is another impressive sister, Sister Mary Lazarus. When she starts a Debbie Harry-style rap, the audience goes wild.

And the men were exceptional, too. Bill Bucher’s befuddled Monsignor O’Hara adds to the comedy.

Michael Brooks’ sweet Eddie, the police officer who is trying to protect Deloris, was a surprise — what a nice singer he is, and what a nice guy. We want more of him on stage.

Newcomer Charlie Rhodes, with his deep voice and shiny suit, was a pleasant surprise as the gangster Curtis, who has a bad habit of killing people who get in his way. He was threatening enough, not over the top.

His posse, played by Tommie Estes, Darius Price and Keilen McNeil, was extra special. All of them can sing, and man, have they got the moves.

It’s a huge cast and everyone is obviously having a good time. They sing and dance with delight.

Most of the audience has seen the Whoopi Goldberg movie. If you don’t know the plot, here it is: Deloris is the girlfriend lounge singer of gangster Curtis. She accidentally sees him kill one of his entourage. She runs to the police, where she talks to her old high school buddy, Eddie, and he takes her to the convent to keep her safe until Curtis can go to trial.

But the real trial is for Mother Superior, who has a hard time dealing with Deloris, because she doesn’t like rules or restrictions, fasting or praying. But Deloris is transformed and transforming once she takes over direction of the chorus. It’s a feel-good story for all.

Adrian J. Smith is the musical director. The orchestra is not seen but heard well. And Ashlyn Keller Summer choreographed the happy group with fun dances from the disco era.

Director Reid Leonard picked an excellent cast. One — OK, two — little complaints. The set is very dark — in fact, all black, except when the glittering stained-glass windows reveal themselves in the church (very disco). And the lighting is rather dim. The singers get spotlights, of course, but those around the singer are pretty much left in the dark. It would be nice to kick the light up so we can see faces better.

The show has a 20-minute intermission and runs until about 10 p.m.

It was another cold night, and we remain under a freeze warning until 10 a.m. The early morning temperature is... read more