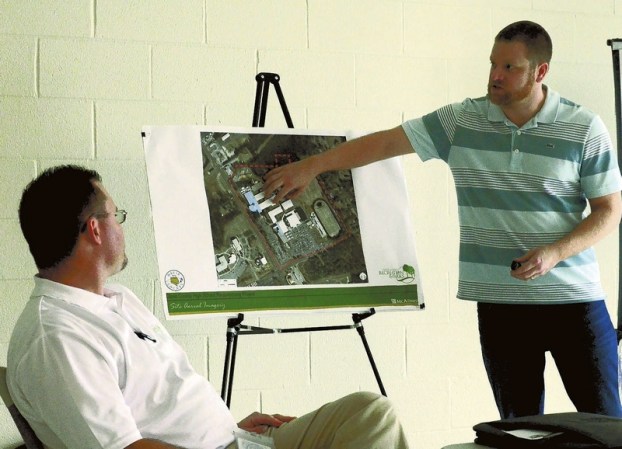 Speak up on Monday

The final public “Design Your Own Park” workshop will be held Monday, March 20, 5:30-7:30 p.m. in the Davie High School media center. The interactive workshop will focus on design elements to help create a visual of the new park.

MOCKSVILLE — The possibilities are endless.

There are two gymnasiums. A big field with seating for thousands. A cafeteria. Plenty of rooms.

It’s the campus of Davie High School, which is soon to be replaced.

A $63 million high school going up on Farmington Road is scheduled to open in August, freeing up the old campus to become Davie County’s first county-owned park.

The new Davie Recreation and Parks Department wants residents’ help in deciding what amenities will be in the park.

Davie County Schools will take up part of the space, moving its central offices into the building that houses the media center, closest to U.S. 601 South in Mocksville. The oldest buildings will be demolished.

Then the campus will be turned over to Davie County, and recreation offices will move there. And amenities.

“We’re doing this the right way,” said Paul Moore, recreation director. “We want the most public input as possible.”

An online survey is available at http://www.daviecountync.gov/700/Recreation-and-Parks or by accessing the department via Facebook. Surveys are also available at the rec offices in the Brock Building on North Main Street in Mocksville.

Moore said plans are to build at least part of the park so revenue can be generated.

Across the country, there’s only one public park that is self-sufficient, he said. Only a few generate half of needed revenue.

“We’re not going to be a Dan Nicholas Park, but we can have features that draw people here and help take the burden off of the taxpayers,” he said.

The cafeteria could be rented to a food vendor.

The idea of a splash pad was an early online favorite, Moore said, adding that about half the public splash pads he’s seen charge a small admission fee.

There could be walking trails, all types of exercise equipment, a rock climbing wall, bicycle tracks, an amphitheater, ball fields, or a rodeo arena. The list could go on and on.

“We’re inheriting good facilities that have been taken care of,” he said. “The structures are really good.”

Moore said that whatever is built, maintenance has to be a consideration. The department will also maintain Brock Gym, its current headquarters, which Moore said has an “NBA quality” gym floor.

By going through all the public processes, the project could be eligible for grants to help with construction on the 33-acre site.

“It’s your tax dollars,” Moore told a handful of residents at a public meeting last month. “We want to make sure our residents have something they will be proud of.”

The goal is to have facilities that will be for infants to active older adults, he said, adding that he wants to feature the history of the school.

Moore hopes to work with community groups that own local ballfields and playgrounds.

“My vision is for you, no matter where you live, to have a little park for you to enjoy nearby, rather than going to the big park in Mocksville.”

The final public “Design Your Own Park” workshop will be from 5:30 to 7:30 p.m. Monday in the Davie High School media center. The interactive workshop will focus on design elements to help create a visual of the new park.

“It is important to facilitate a collaborative design that will have high impacts for all Davie County residents and visitors. Park design is crucial for the success of any park system,” he said.

Today’s morning temperature is only one degree warmer than Wednesday’s — 25 — and we remain under a freeze warning... read more