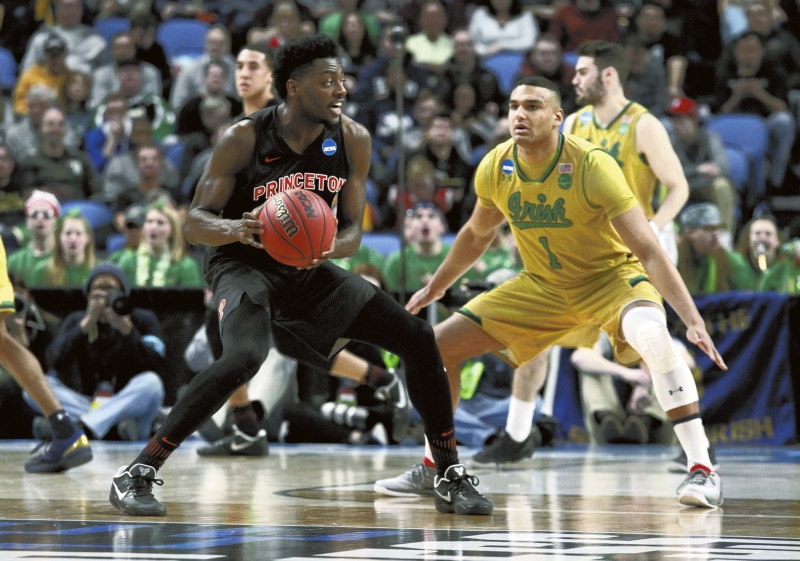 BUFFALO, N.Y. (AP) — The Fighting Irish avoided the dreaded upset from a 12th seed in the first round of the NCAA Tournament.

Bonzie Colson scored 18 points and the West Region’s fifth-seeded Fighting Irish avoided a meltdown in the final two minutes to hang on for a 60-58 win over the Princeton Tigers on Thursday afternoon.

After Notre Dame’s Matt Farrell missed the front end of a one-and-one with a 59-58 lead, Princeton had a chance to win on its final possession. Devin Cannady missed an open 3-pointer , and Notre Dame’s Steve Vasturia pulled down the rebound and was fouled.

“We gave everybody a show, right?” Notre Dame coach Mike Brey said. “We escaped. We’ve been in a lot of games like that where game situations need a big defensive stop. We’ve been there. I’m proud we’re still alive.”

The Fighting Irish players appeared stunned walking off the floor.

Those players included Farrell, the usually clutch-shooting point guard, who hit six of nine for 16 points. He wore a scowl as he nearly left the floor through the wrong exit after Cannady’s miss.

Ferrell finished with 16 points but in a game the Fighting Irish (26-9) nearly squandered an 11-point second half lead.

Notre Dame improved to 9-2 in its past 11. The Fighting Irish have also won seven of nine tournament games over the past three years, and they are the only team to reach the Elite Eight in each of the past two seasons.

The Tigers scored the next two baskets. Pete Miller put back a missed Cannady 3-pointer with 54 seconds left.

Farrell missed a 14-footer, and the Tigers cut the lead to 1 when Miller scored again, this time putting back a miss by Steven Cook.

“No matter how it looked, we got the win and that’s all that matters,” Colson said.

“We had a shot,” Princeton coach Mitch Henderson said. “Right now, this one hurts. When you’re in the locker room, it’s hard to say a proper ‘Thank you,’ because it feels like goodbye.”

Cannady thought his shot was on target.

“I looked at the rim and when it went out of my hand, I thought it was good,” said Cannady, who hit just two of 10 3-point attempts and finished with seven points. “But it didn’t go in. It happens when you take those kinds of shots.”

The Tigers were making their 25th tournament appearance and have lost in the first round in each of their past four trips. They haven’t won since the fifth-seeded Tigers defeated UNLV 69-57 in 1998.

In 1989 the Tigers nearly became the first No. 16 seed to take down a No. 1, when coach Pete Carril and his undersized squad took mighty Georgetown and twin towers Alonzo Mourning and Dikembe Mutombo, to the final buzzer in a 50-49 loss.

“This team has been punched in the face a little through the season, but they always responded,” Henderson said. “They did a great job. I was pleased with the chances we had.”

The Tigers led just once in the first half, building a 17-15 edge with 11:24 remaining, when Amir Bell scored on a transition drive, was fouled and completed the three-point play. The Fighting Irish regained the lead two minutes later when Colson scored from the right post.

COMING OUT COLD: The Tigers missed five of their first six attempts through the first 5 1/2 minutes, with Weisz scoring the only basket, a 3-pointer 2:55 in to cut Notre Dame’s lead to 4-3.

CHRIS CHRISTIE SIGHTING: New Jersey Gov. Chris Christie watched the game from behind the Notre Dame bench. Christie’s son Andrew played baseball at Princeton, while his daughter, Sarah, has been a Fighting Irish team manager. Christie is also a long-time friend of Brey.

IN STITCHES: Fighting Irish guard Rex Pflueger left the game about six minutes in with a cut to his left forehead after being elbowed by Princeton’s Cook. The cut required between six to seven stitches. A TV sideline reporter said Pflueger asked a fan to take a picture of his stitches because he thought they looked cool.