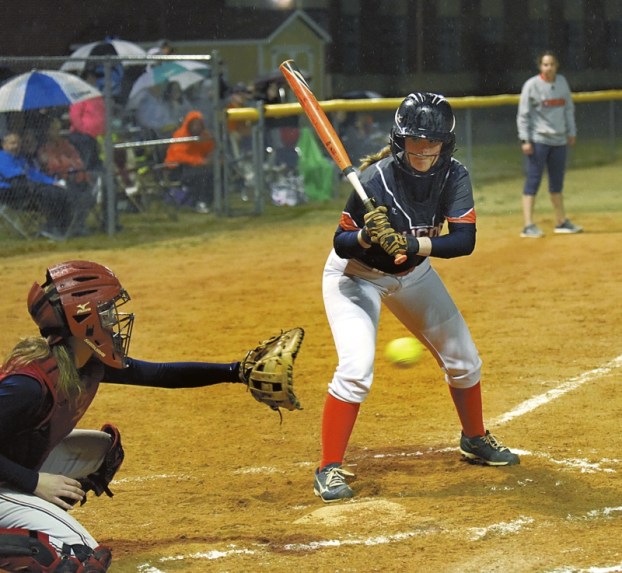 Wayne Hinshaw/for the Salisbury Post ... Shown in an earlier game this season, Carson’s Krista Peninger had a big hit to lead the Cougars past South Rowan last night, 6-2.

CHINA GROVE — The rain fell and the lights went out, but Carson’s soggy softball team was all smiles after beating rival South Rowan. 6-2.

Carson had been 10-run ruled by East Rowan and West Rowan, but those ugly losses looked like ancient history on Friday. Carson (4-3, 2-3 South Piedmont Conference) did everything right offensively and defensively and got a sharp game in the circle from junior Rylie Stewart.

“I can’t explain it,” said Carson first baseman Krista Peninger, who got the biggest hit of the game. “It’s like we turned on a switch. We’ve just got to figure out how to play like that all the time.”

It’s been a wacky year in the SPC, where league favorite Hickory Ridge already has two losses. Central Cabarrus hadn’t lost a league game until Friday — when it got 10-run-ruled by a West Rowan team that  lost at home to South Rowan. Now Cox Mill looks like the team to beat, but who knows?

“On any given day, just about anyone in this SPC can lose to anyone else,” South coach Dean Mullinax said. “This was just a nasty night, and  we didn’t get many breaks. But hats off to Carson. They played really well. They made all the plays.”

With rain falling so heavily that the baseball game at Carson was postponed, neither team could score in the first two innings. South briefly led 1-0 on Autumn McKeon’s run-scoring groundout in the top of the third, but Carson’s three-run bottom half of that inning proved decisive.

A reversed call on a close play at second base helped set the table for Carson’s big inning. Kaitlyn Honeycutt’s RBI groundout tied it 1-all, and Penninger followed by whacking a two-run single up the middle.

“I’ve been struggling, I’m not gonna lie,” Peninger said. “We had people on base, and I really needed to get a hit. I went with the pitch, and, fortunately, it got through.”

South cut the deficit to 3-2 in the fourth when freshman pitcher Whitley Arnott drilled a two-out, run-scoring double in the gap, but center fielder Madison Barnhart’s strong arm forced the tying run to stop at third.  Then Stewart got a huge out on a groundball to preserve the lead.

“Rylie pitched a smart game,” Carson coach Charissa Duncan said. “She kept the ball away from the hitters she needed to stay away from.”

Carson pushed its lead back to 4-2 in the bottom of the fifth with a hit batsman, a steal, a bunt by freshman Maci Cooper and aggressive base-running.

The top of the fifth brought chaos. South had two outs and a runner at first, after losing a baserunner to an obstruction call, when the lights suddenly went black, creating a delay.

When lights were restored, Stewart allowed two straight solid hits to load the bases, but once again she got the big out she needed. This one was a little scarier — a long fly to left that was hauled in by Charity Mock.

“It got crazy when the lights went out, and South has really good hitters,” said Stewart, who has committed to Greensboro College. “But I trusted all my pitches, and my defense came through behind me.”

The rain stopped and Stewart sailed through the top of the sixth, 1-2-3.

Carson made it 6-2 with two runs in the bottom of the sixth. Cooper’s speed and hustle created havoc, and Katie Jewell came through with a solid, run-scoring hit.

“Cooper made a lot of good things happen for us,” Duncan said. “And I guess we got some good experience playing in the rain at East.”

South (4-3, 3-2 SPC) tested Carson’s defense in the seventh, but third baseman Jess Freeze made a barehand play on a bunt to start the inning. When line drives went straight to shortstop Jewell and right fielder Cooper, the Cougars owned the victory.

Both teams had nine hits. Brooke Lowery had two for South. Jewell and Brie Bauer had two each for the Cougars. The biggest difference was with the gloves — zero errors for Carson, and three for South.