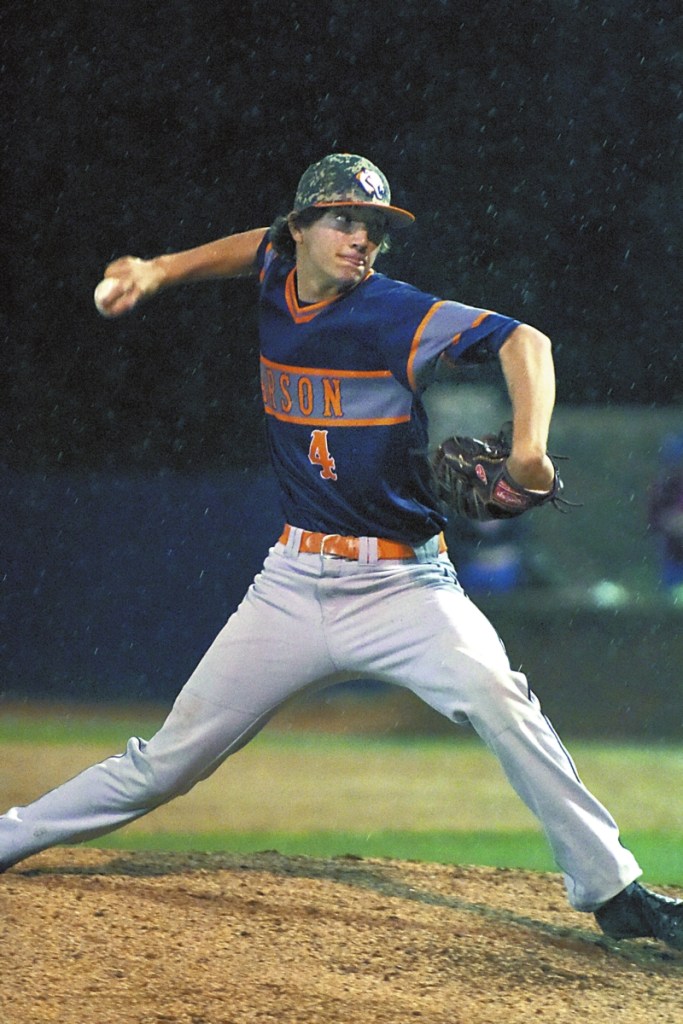 Carson got the South Piedmont Conference victory, 1-0, on a frigid Thursday when speedy Clayton Gilmore maneuvered his way around the bases in the second inning on a clean single, stolen base and two errors.

“The pitchers were just outstanding, and that includes Olen Stamper (who pitched the bottom of the sixth for West),” winning coach Chris Cauble said. “There’s a reason Love is a UNC signee and there’s a reason our guy is a big-time recruit. It was just was a well-played game between two good clubs. West certainly had their chances to score, but when they did, we played good defense.”

Those who witnessed his last two starts said White probably wasn’t throwing quite as hard as he did in last week’s no-hitter at East Rowan, but his command may have been even better. He struck out 13.

“Owen is definitely a great pitcher,” Love said. “He was locating everything, fastball, curve and change-up, everything down low. It’s a tough one to lose, but sometimes that’s how baseball goes.”

White sailed through the first four innings, allowing two walks and no hits. But Pearce Wilhelm, who transferred to West from Carson, suddenly led off the fifth with a sizzling double down the left-field line. After a wild pitch, West had a runner at third with no outs, and Cauble had a decision to make.

“Bring the infield in, and there’s always the risk it will lead to a big inning,” Cauble said. “But considering who was pitching, I knew we might have to win this game 1-0. We brought the infield in, and it worked out for us. Next time it might not.”

White made the pitches, and the guys behind him, especially young third baseman Cole Hales, made the plays. It went groundout-strikeout-groundout, the fifth was history, and Carson still led 1-0.

“This was a very well-coached game, a very well thought-out game,” White said.  “We had very good pitch selection to get out of that jam.”

White was right back in another mess in the sixth. West leadoff man Brett Graham started the inning with a solid single to  right. Love was sent to the plate to bunt Graham over, and he tried. But he couldn’t get a bunt down and then White struck him out on a checked swing on a fastball that was up and in.

Brandon Walton lashed a double to right, but Graham, who couldn’t be sure the ball would fall for a while, had to stop at third base. Cauble had already decided before the game that West cleanup man Trevor Atwood wasn’t going to beat the Cougars, and he didn’t get a chance to swing. An intentional walk to Atwood filled the bases.

Again White pitched out of it. Hales gloved a grounder and fired home for a forceout. Then shortstop Cameron Prugh gobbled up a bouncer for a routine force to end the inning.

“We had two great chances to score tonight, and that was more than I thought we’d get against Owen White,” West coach Seth Graham said. “Runner at third, no outs, you’ve got to be able to drive that run in there, no matter who’s pitching against you. Then if we get the bunt down in front of Walton’s double, we score. We just didn’t capitalize when we had chances.”

Love, who had seven Ks,  had just fanned two hitters on curveballs in the second inning when Gilmore slapped a hanging curve that was belt-high into center field for a single.

Next game a crazy play, when Prugh hit a bouncer to Walton at third base. Walton’s throw to first skipped in the dirt, and Gilmore never stopped running.

“He was able to score because of the way he hustled from second to third, running hard all the way,” Cauble said. “If he doesn’t do that, we can’t even try to score there.”

Wilhelm, West’s first baseman, recovered the ball quickly enough that it appeared Gilmore would be out by 15 feet, but the Falcons (3-3, 1-3)  weren’t able to execute on the throw-and-tag and Gilmore scored the game’s lone run.

“They were running into an out there,” Graham said. “We had a different defensive alignment than we’ve had in a game this year, but they’ve practiced that play. We just didn’t execute on that one play defensively, and we couldn’t get the big hit again. We’re 1-3 in the league now and we could easily be 4-0 with a couple of hits.”

White, who has Florida, Clemson and South Carolina at the top of his list of colleges, ended the game in style with a strikeout. He was determined to finish.

“Pitching against Austin, I knew it would be a pitcher’s duel, and I love that kind of challenge,” White said. “I had a blast out there, but it really was cold and I had the hand warmers on in the dugout so I could grip the baseball. I was chilling up in the sixth and seventh.”