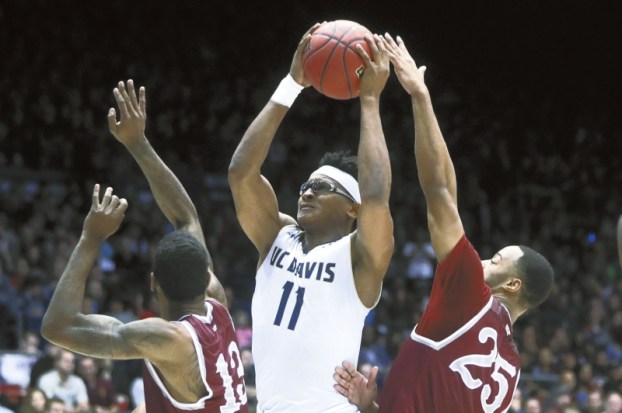 The 16th-seeded Aggies rallied in the second half and held off North Carolina Central down the stretch to earn a trip to Tulsa to play No. 1 seed Kansas on Friday.

Brynton Lemar scored 15 points and Lawrence White added 14 for UC Davis, which had earned a trip to the tournament by winning the Big West Conference Tournament.

The Aggies (23-12) won despite 18 turnovers that led to 20 points for streaky North Carolina Central. But the Eagles couldn’t overcome poor shooting that deteriorated even more in the second half.

The Eagles pulled within 64-63 with 1:49 left in the game on a 3-pointer by Dajuan Graf. North Carolina Central got the ball back with 37 seconds left, but another 3-point try by Graf was off the mark. Graf had to foul Lawrence White, who made two free throws with 16 second remaining to give the Eagles some breathing room. Lemar hit a foul shot with 4 seconds left to put it away.

UC Davis came out and grabbed momentum on two rim-rattling dunks by Moneke and led by as many as nine points in the first half before N.C. Central could get its feet. The Eagles stormed back with a 16-3 run and led 34-31 at halftime, thanks in part to nine UC Davis turnovers.

Graf had 12 points for N.C. Central on 5-for-7 shooting from the field at the half.

UC Davis had an 11-2 run in the second half, and North Carolina Central was just 1 of 9 from the field during that stretch.

UC Davis: Won despite some sloppy ball-handling. The turnover-prone Aggies will have to tighten it up to have a chance against Kansas.

North Carolina Central: Poor shooting doomed the Eagles, especially when the game got close down the stretch. They were 5 of 26 from 3-point range. With five seniors starting, the window may be closing on their hopes to get any deeper in the tournament.

UC Davis: Plays No. 1 seed Kansas on Friday in Tulsa.