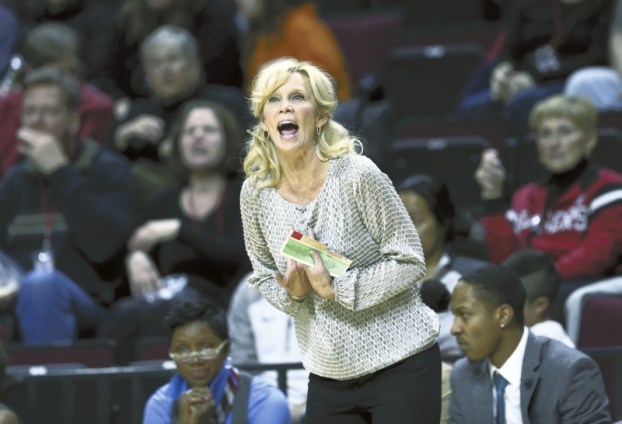 In this Thursday, Feb. 18, 2016, photo, Michigan State coach Suzy Merchant reacts as she is called for a technical foul during the first half of an NCAA college basketball game against Rutgers in Piscataway, N.J. Merchant is trying to enjoy this year's trip to the NCAA Tournament after surviving some heart-related health scares this season. The ninth-seeded Spartans will face eighth-seeded Arizona State on Friday, March 17, 2017, in South Carolina. (AP Photo/Mel Evans)

EAST LANSING, Mich. (AP) — Suzy Merchant has pep in her step and a twinkle in her eye — a far cry from two stretches earlier this season for the Michigan State coach.

Merchant fainted and collapsed onto the court during a home game, missing only the following contest, and was out for a six-game leave after another scare on the road.

Doctors discovered the 47-year-old Merchant has a heart abnormality, which is monitored by an implanted device. She was treated in New Jersey by a procedure she’ll never forget.

“They told me they were going to stop my heart for about 5 seconds and that I would be awake for it,” she said. “That’s when reality set in because of the magnitude of it all. Just like they told me it would, when they stopped my heart, it felt like there was an elephant on my chest. I got scared and even though it wasn’t like I was dead, I still couldn’t wrap my head around it while I thought about my two boys and (my husband) Gary.”

Two months after the relatively routine procedure, Merchant will lead the ninth-seeded Spartans (21-11) against eighth-seeded Arizona State (19-12) in the first round of the NCAA Tournament on Friday night in South Carolina. The winner will likely face the top-seeded Gamecocks on their home court.

Merchant has been reunited with her team for the last eight games, providing the sights and sounds her star player has been happy to have again.

“I missed seeing her on the sideline and not hearing her voice,” said senior guard Tori Jankoska, who set a single-season scoring record at the school with 720 points. “It was tough to not have her because we almost have a mother-daughter relationship.”

Jankoska saw Merchant crumpled on the floor on Jan. 1 in a game against Illinois.

“That was scary, especially when she wasn’t moving,” she recalled.

And after a comeback that Merchant acknowledged was too soon, Jankoska noticed something wasn’t right two weeks later while the team was waiting to fly home from New Jersey.

“I went to the bathroom and that’s where she was hiding,” Jankoska recalled. “That was tough because you could tell something wasn’t right.”

Merchant was advised to stay in New Jersey for treatment, a decision that was made more difficult because her 6-year-old son Brady was with her on the trip.

“I didn’t want him to stay with me and have to go through riding in the ambulance,” she said. “I sat him down and said, ‘Brady, I need you go to home on the plane.’ When I reassured him that his stuffed animal would be home waiting for him, he was OK with it.”

Like many coaches, Merchant acknowledges that she doesn’t sleep or eat as much as she should. Balancing her roles as coach, mother and husband also is challenging.

“They want me to eat more to be honest and stay hydrated,” she said. “I started to work out again, and that has been a positive. I’ve been trying to rest more, too, but that hasn’t been easy.”

Dempsey, Howard, Cameron back on US roster for qualifiers