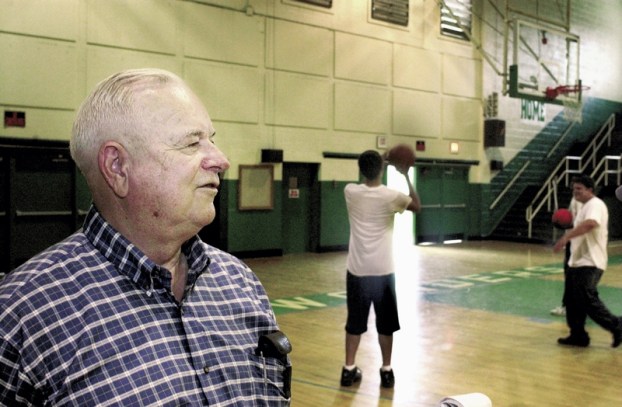 Brett Clark/Salisbury Post file photo ... Earl Lentz, a former coach at A.L. Brown, is shown in 2004 at the high school. Lentz, who died in 2015, coached the Wonders to the Western North Carolina High School Association championship during the 1966-67 season.

KANNAPOLIS — They were a third-place team in a seven-team league, but when all was said and done in the 1966-67 basketball season, A.L. Brown High’s boys were the last team standing.

Key players included senior forwards Reggie Smith and Steve Lambert and junior guards Dan Dayvault, Ken Sharpe and Vernon Long. Full school integration was coming, but it hadn’t arrived yet. Long was the first African-American player to come over from the Carver High Blue Eagles and make his mark on the Wonders’ basketball program.

Robert Horton and Rod Holbrooks were the substitutes who got on the floor frequently for coach Earl Lentz. Both came through with double-figure games when starters were fatigued or in foul trouble.

Lentz had been a baseball star at Catawba College, a prodigious slugger known as “Big Earl,” and he’d put together a 33-game hitting streak that bridged the 1955 and 1956 seasons. He wasn’t a star in college basketball, but he’d competed on the hardwood for the Indians, and he’d learned some things.

There were only seven schools in the South Piedmont Conference in 1966-67 — Albemarle, Statesville, A.L. Brown, South Rowan, Thomasville, Concord and Asheboro.

Salisbury’s Boyden High and Lexington High were still part of the state association (NCHSAA) and still members of the 4A Central Conference. The South Piedmont Conference wasn’t as big or as tough as it would get in the fall of 1967 when Lexington and Boyden joined the fun.

In the regular season, the Wonders went 9-3, splitting with Statesville and getting swept by Albemarle.

South Rowan lost two close games to A.L. Brown and settled for fourth place at 5-7. Fourth mattered because the top four finishers got to keep playing. Those four advanced to the “Bi-Conference,” a tournament format in which the South Piedmont teams squared off against the best four North Piedmont Conference clubs, with 1 seeds playing 4 seeds and 2 seeds playing 3 seeds in the opening round.

When all-conference teams were announced, Statesville and Albemarle had three players each on the squad. A.L. Brown had just one — Dayvault. The football team’s quarterback, he was an extraordinary shooter who averaged 17.6 points a game to lead the SPC.  Snubbed for all-conference honors was Smith, who had averaged 13.2 points per game and scored 25 against Statesville in the loss that ended the regular season and relegated the Wonders to third place.

The Wonders had zero momentum entering the postseason, but they had the home floor. The bi-conference tournament would be played in their gym— the W.J. Bullock Physical Education Building that had been constructed in 1958.

As the SPC’s third seed, the Wonders took on Davie County, the NPC’s No. 2, in the first round.  The Wonders gave up the most points they allowed all season — 66 — to a Davie team led by Randall Ward, William Carter and Jerry Hendrix. But the Wonders scored 77. Dayvault poured in his season high — 26.

A.L. Brown, Albemarle and Statesville all won in the first round. The only NPC team to advance to the semifinals was top-seeded North Iredell.

In the semis, the Wonders took on Albemarle, a team led by Riley Russell and Billy Howell. The Bulldogs had beaten the Wonders, 54-47 and 43-42 in the regular season.

The tournament championship game was the third tense struggle between the Wonders and Statesville’s Greyhounds, led by Richard Bagnal, Jack McGill and Eddie Gamble.

It looked bleak early, as Statesville surged to an 18-6 lead. But the Wonders were back in it by halftime, down by two. Holbrooks scored 10 big points off the bench, and Davault scored 15. The Wonders pulled it out, 54-52.

Smith, Dayvault and Sharpe made all-tournament, and the Wonders had made it to the WNCHSAA championship game.

It’s forgotten sometimes that the Wonder girls  — the Wonderettes — also were good that year. They knocked out NPC champ North Stanly along the way and reached the championship game of the bi-conference tournament before losing to rival Concord.

The WNCHSAA boys championship game against the Rutherfordton-Spindale Hilltoppers was played on Tuesday, March 14, in Hickory at Lenoir-Rhyne’s Shuford Gymnasium. The Wonders trailed most of the way and were still down 47-43 heading to the fourth quarter. But they finished with a rush, scoring 27 points in the final period to win going away, 70-61.

Five Wonders scored in double figures, led by Dayvault’s 20 points. They called him “Dandy Dan” for a reason.

In 1968, the Wonders would repeat with a devastating team. For that run, Dayvault, Sharpe and Long were joined by a powerful wave of talent from Carver.