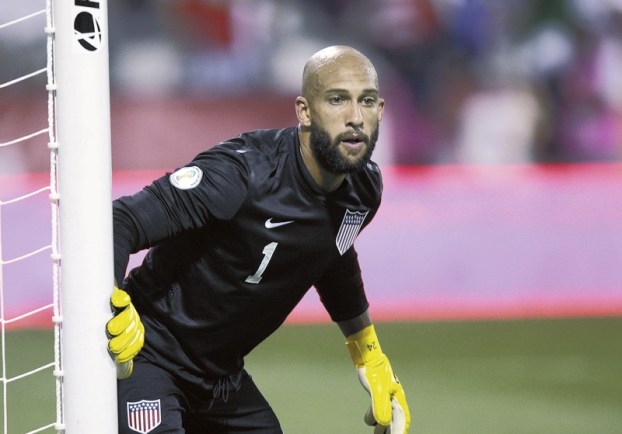 FILE - In this Sept. 10, 2013, file photo, United States' Tim Howard covers the goal during a World Cup qualifying soccer match against Mexioc in Columbus, Ohio. Howard was selected for the U.S. roster by coach Bruce Arena on Wednesday, March 15, 2017, for the team's World Cup qualifiers against Honduras and Panama. (AP Photo/Jay LaPrete, File)

Dempsey, Howard, Cameron back on US roster for qualifiers

The U.S. coach from 1998-2006, Arena returned in November after a 0-2 start in the final round of qualifying. He selected just 13 of the 26 players on Klinsmann’s final roster for the first competitive matches of Arena 2.0, against Honduras on March 24 at San Jose, California, and at Panama four days later.

“If you put pencil to paper here, we go nowhere unless we come out of these games with points, and by that I mean three points or more,” Arena said Wednesday during a Facebook Live chat. “My goal is to get six. We need to get three in the Honduras game and we need to go to Panama and be aggressive and get at least a point.”

Six players earned selection with their performances during Arena’s January training camp: defenders Jorge Villafana and Walker Zimmerman; midfielders Kellyn Acosta, Sebastian Lletget and Dax McCarty; and 37-year-old goalkeeper Nick Rimando. Fourteen of the 24 players are from Major League Soccer, up from 10 on the November roster.

The top three nations in the North and Central American and Caribbean hexagonal qualify for the 2018 World Cup in Russia, and the No. 4 team meets Asia’s fifth-place finisher in a playoff for another berth.

“The message is simply this: We got to bond, be a team, be supportive of each other, have good concentration during the week and be excited to play,” Arena said.

Defenders DeAndre Yedlin and Eric Lichaj were going to be picked before they got hurt, and right back Timmy Chandler was omitted because he is suspended for the Honduras match. Midfielder Jermaine Jones was picked, but he must serve a one-game ban.

Dempsey, 34 and a veteran of three World Cups, did not play after Aug. 21 last year because of an irregular heartbeat but went the distance in Seattle’s first two MLS games this season.

“He keeps getting better,” Arena said. “We’ve dealt with his fitness coach and we’ve seen the improvement and we really feel that on any roster that the U.S. has that if you can include a healthy Clint Dempsey in any kind of manner or form, it’s a plus.”

Howard, who turned 38 on March 6 and was a U.S. starter at the last two World Cups, injured the adductor muscle in his right thigh on Nov. 11 during the 2-1 loss to Mexico and had surgery six days later. After missing Colorado’s opener on March 4, he started last weekend and made several outstanding saves.

Brad Guzan, the top U.S. goalkeeper at last year’s Copa America, replaced Howard against Mexico and was in goal for the 4-0 rout at Costa Rica that led to Klinsmann’s firing after 5½ years.

Guzan didn’t play for Middlesbrough from Aug. 28 until Jan. 2, but has made four club appearances since the start of this year. Arena said he won’t decide on his starting goalkeeper until after training camp opens Monday in San Jose.

Arena intends to use Fabian Johnson at left midfield, where he plays for Borussia Moenchengladbach, leaving left back options to include 34-year-old DaMarcus Beasley and Villafana, who has never made a competitive international appearance. Michael Orozco is the most experienced right back, and Cameron also is a possibility — even though he plays in midfield for Stoke.

Cameron strained the medial collateral ligament in his right knee on Oct. 22, returned as a late substitute on Feb. 26 and has played two full matches since.

“We don’t want to make a habit of moving players around a whole lot, but in this case we’ll probably look at Geoff as either a center back or a right back,” Arena said.

Arena said Yedlin was examined by U.S. team doctors in Los Angeles this week and likely will be sidelined for five weeks. Chandler was left off because Arena didn’t want him to travel for Europe for just the second game.

Among those passed over were Benny Feilhaber and Sacha Kljestan, which could signal Arena intends to use 18-year-old Christian Pulisic in a central midfield role.

“That’s certainly an option, depending on how we line up,” Arena said.