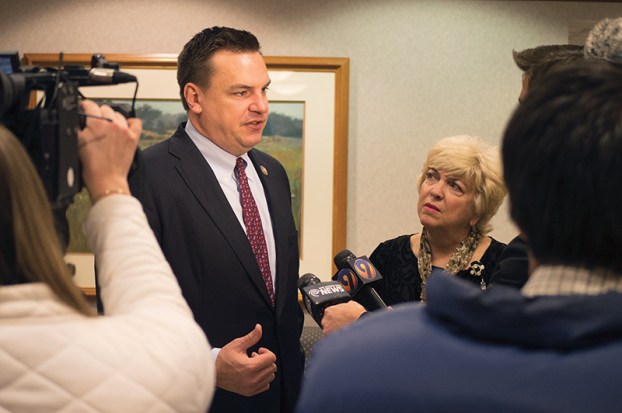 Hudson, a Republican who represents much of Rowan County, spoke in an interview with the Salisbury Post about his support for the American Health Care Act and a recent report about the financial and human costs of the bill. Introduced by Republicans, the AHCA would replace the Affordable Care Act, commonly called Obamacare. The recent report from the Congressional Budget Office concluded that the GOP version of health care would reduce the federal deficit but that tens of millions more people would be uninsured.

On Tuesday, Hudson said the newly introduced health care bill shows that Republicans are keeping a promise to repeal and replace the ACA.

“I promised when I ran for re-election, actually I promised it on all of my campaigns, that I would do what I could to repeal Obamacare and replace it with a market-based system that puts individuals in charge,” he said. “We’re keeping that promise, but we’re also doing it in a responsible way so that people don’t fall through the cracks. We want this to work for all Americans and do it the right way.”

Hudson, a member of the Energy and Commerce Committee’s Health Subcommittee, said he is hopeful that Democrats and Republicans can work together “to get it right.”

Some provisions of the American Health Care Act include: repealing a mandate that individuals maintain coverage; eliminating tax penalties for people who don’t have health insurance; allowing insurance companies to charge higher premiums for people who don’t maintain coverage; replacing subsidies for health care with tax credits; and restructuring Medicaid so that states receive specified amounts of money each year. It keeps some provisions of the current law, such as allowing people to stay on their parents insurance plans until the age of 26.

The bill has received vocal opposition from Democrats and conservative Republicans shortly after its introduction. Opponents included Rep. Mark Meadows, a Republican who represents the state’s 11th Congressional District and chairs the conservative House Freedom Caucus.

Asked about opposition from conservatives, Hudson focused on financial findings in the Congressional Budget Office report, which estimated the GOP bill would shave $337 billion off the federal deficit from 2017 to 2026.

The report also projects an $883 billion reduction in revenue because of tax cuts that would disproportionately benefit the wealthy. For example, one tax set to be repealed targets investment income of certain high-income individuals, estates and trusts.

“I think if you’re a true conservative, what you want to do is take power away from the federal government and give it to individuals and give it to states, which is what we do,” Hudson said. “You know, we’ve got an $883 billion tax cut. … You talk about saving $880 billion; that’s a huge entitlement reform that all conservatives can rally around.”

The fact that the federal deficit would decrease by billions of dollars helps make the AHCA “conservative legislation,” Hudson said.

“This is the kind of reforms that I’ve dreamed about my entire adult life,” he said. “There are other things I would like to do. I tried to amend this bill in committee. It’s not perfect. Certainly, I could make it more conservative if I had a magic wand or could control votes in the Senate, but the way it stands is good, conservative legislation.”

The Congressional Budget Office report found that 52 million people would be uninsured in 2026 if Congress passes the AHCA. That’s nearly double the number of people who are projected to be uninsured in the same year under the ACA. In large part, the increase in the uninsured population would come from Medicaid changes, according to the report.

Meanwhile, the report found average premiums would spike immediately following passage of the AHCA. By 2026, average insurance premiums would be 10 percent lower than the same year under current law.

Hudson said he doesn’t agree with the findings showing tens of millions more uninsured people. He said the report doesn’t account for other health-care-related changes Congress may pass. Hudson said he believes that insurance premiums will decrease as a result of the AHCA and other congressional and administrative action.

He said insurance costs could decrease when mandates for specific kinds of coverage are eliminated. A young, single male, for example, doesn’t need maternity coverage, he said. If plans were tailored specifically to the needs of that young, single male, costs would be reduced.

During a recent committee meeting, Hudson told stories from the 152 people who had written to him about their experiences since Jan 12, 2017. Over the last year, Hudson’s office said he’s responded to 1,447 calls, letters and emails on health care reform. Some told stories about skyrocketing deductibles. Others lost insurance after the passage of the ACA.

Once Congress and the Trump administration wrap up health care reform, Hudson said, he believes his constituents’ concerns will be addressed. Hudson said the next step will include administrative action to deregulate the health care marketplace, which doesn’t require a congressional bill. A third step would include passing “conservative-minded bills” such as allowing insurance companies to sell across state lines.

By Josh Bergeron josh.bergeron@salisburypost.com SALISBURY — The Salisbury-Rowan Convention and Visitors Bureau board voted Monday to increase the county’s occupancy tax from... read more