Paying for health care is a dollars and sense issue 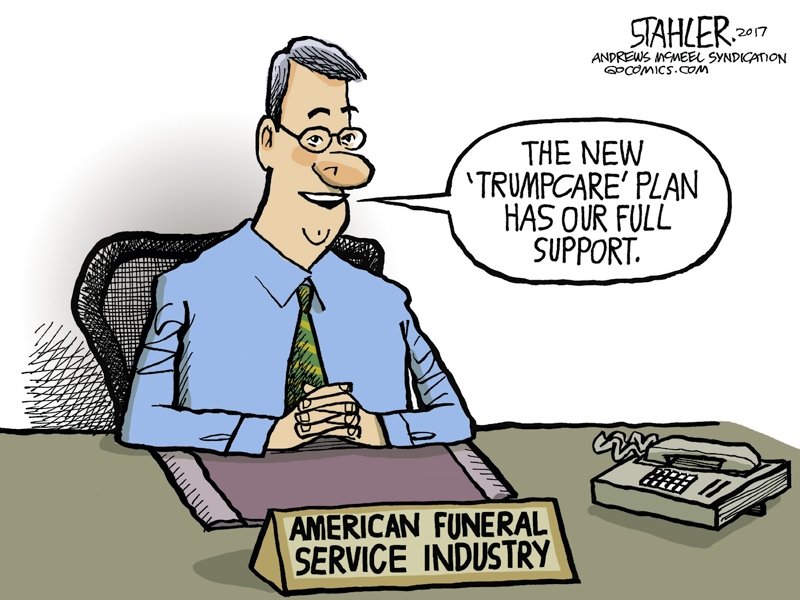 It might surprise you to know that total annual health care spending in America is more than $10,000 for every man, woman, and child. This total includes the money paid by insurance companies, Medicare, Medicaid, the V.A. and money paid directly by patients for care, divided by the number of citizens.

We do not get our money’s worth. We spend just about twice as much per citizen as any other developed “rich” country, and the CIA reports our country ranked 42th in the world for life expectancy .

To be clear, the current national debate about keeping or repealing Obamacare is not about the quality of the work done by doctors or nurses — it is about how to pay for it.

Imagine this: You and your kids discover a neighbor is suffering. If you go to your place of worship for guidance, you get pointed toward charitable behavior. Go look at your own taxes and you get pointed in a different direction. You, and we all, are in a moral dilemma.

Just following the money (not the care given), there is a menu of at least eight items you and your kids can choose from to fix this mess. Pick one or more to design your ideal solution.

First, remove the current law, put in place under President Bush, which says the federal government cannot negotiate lower drug prices with the pharmaceutical industry, currently ranked the third most profitable segment of the stock market. (In 2016, the tobacco industry was second most profitable, and Wall Street investment managers were first.)

And/or third, raise taxes on some industries that damage public health, like cigarettes. For example, obesity is the fastest growing threat to public health in America, accounting for about one dollar out of every five spent. We could heavily tax those food items like sugar that cause obesity, raising prices significantly, which lowers consumption, reduces obesity and raises new tax dollars to subsidize health care.

And/or fourth, eliminate taxpayer subsidies to industries like oil, gas or coal that increase our national health care bill. The subsidy is around $37.5 billion annually, not counting health care costs, which are significant. For example, for every 12 jobs in the subsidized coal industry in America, one citizen dies from the health effects of coal every year.

And/or fifth, we could have deliberate transparent financial rationing of health care — which could be done by an approved list of treatments allowed under defined circumstances. For example:

a) Your child has cancer and is relatively young and healthy. The financial rules could say, “Welcome to the cancer ward,” or

b) Your elderly mother has cancer, is obese and diabetic. The financial rules could say, “Welcome to hospice” (unless you are rich).

And/or sixth, have people who have high incomes be taxed to subsidize portions of poor people’s health care insurance cost, and borrow the rest. Congress would say: “The amount the people who have high incomes are contributing to your health-care insurance costs does not do the whole job, but we have decided that the government will borrow the rest — and your kids will pay for it.” (A version of “remove and replace” Obamacare now being considered by Congress proposes this.)

And/or seventh, say to the poor people, “We are not going to increase the national debt to pay for your health care, but here is some money paid in taxes by people who have high incomes. These people do not want to pay $10,000 per year for every poor person, so Congress decided they are only going to give each poor person a portion of what is needed. Do the best you can.”

(One of proposed versions of “remove and replace” does this.) If the rich do not pay enough, see option eight.

Or eight, if poor people cannot afford $10,000 annually per person, and we do not chose one or more of the first seven choices, we can let market forces dictate, and say, “That is too bad,” and let the poor people die painful early deaths.

Let me know how your chat with your kids and your preacher goes.

It’s clearly finer to be in Carolina