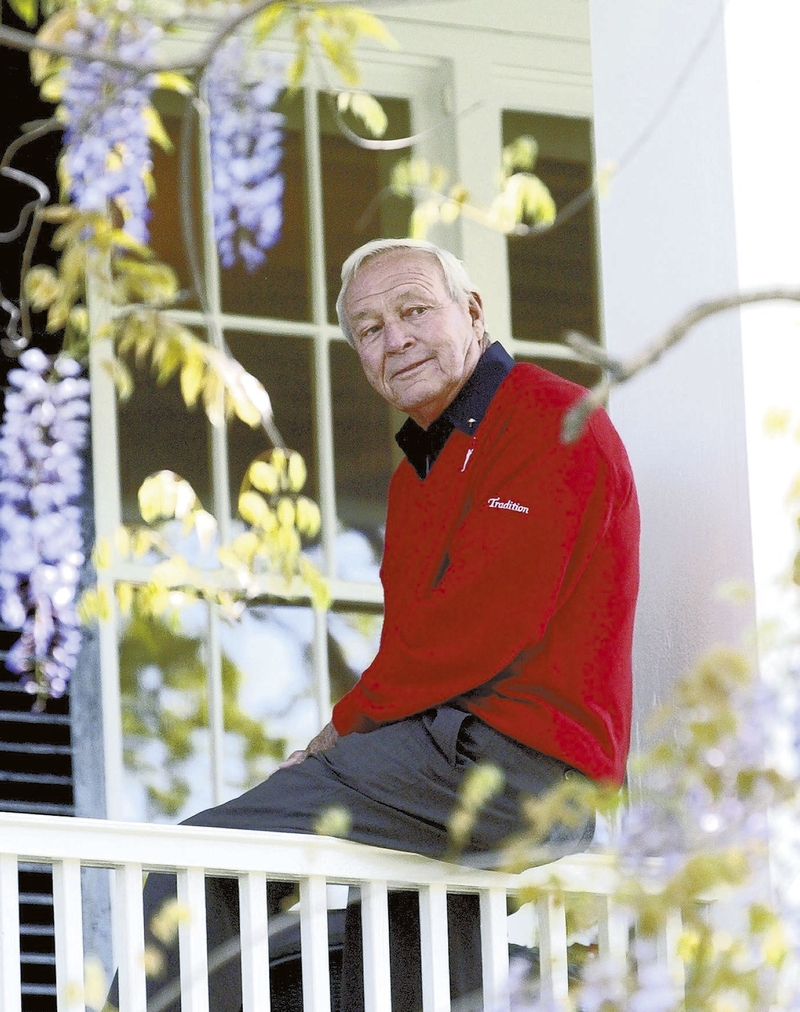 ORLANDO, Fla. (AP) — The photo was never published out of respect for Arnold Palmer.

Palmer was walking his dog early one morning when he turned down Marina Drive across from the Bay Hill Club & Lodge, a tiny lane next to the tennis courts where sunlight filtered through a canopy of trees. He was 85, moving slower than anyone was used to seeing, his shoulders slightly drooped.

What made the picture so poignant was that he looked so real, a man of the people, perhaps Palmer’s greatest appeal.

The Bay Hill staff asked the magazine not to use the photo simply because Palmer preferred to be seen in public wearing slacks and a golf shirt (usually pink, always with the Bay Hill umbrella logo), sometimes a sweater. The King was out of uniform.

To look down Marina Drive now is to see the image of Palmer walking his dog, and to be reminded of his presence.

It will not go away anytime soon.

There are sure to be somber moments at the Arnold Palmer Invitational this week. That 13-foot bronze statue of Palmer behind the first tee at Bay Hill was attracting plenty of attention Tuesday. The cart that Palmer used to drive, with two sets of clubs strapped on the back, will be behind the 16th tree starting Wednesday.

Players have put the umbrella on their caps, their shirts or their golf bags for the week. They are taking turns going to his office, sitting behind his desk and signing memorabilia for fans, because that’s what Palmer would have done.

Golf Channel, the network Palmer co-founded with Joe Gibbs in 1995, is devoting 50 hours of programming from Bay Hill this week, including live coverage of the opening ceremony on Wednesday.

But it would be a mistake in this week of remembering the King to think of this as the end.

Since his death in September, Arnold Palmer Enterprises already has renewed corporate deals with MasterCard, equipment maker Textron and Arizona Beverages, which includes the famous Arnold Palmer (half iced tea, half lemonade).

The greater concern is the tournament, and whether it will lose any prestige now that Palmer is gone.

There have been comparisons with the AT&T Byron Nelson outside Dallas, and how it struggled to get a strong field after Nelson died in 2006, in part because the golf course wasn’t exactly on anyone’s bucket list to play. There’s a big difference, though. Nelson had his name on a tournament that moved from Preston Trail to the TPC Four Seasons Las Colinas.

Bay Hill had Palmer’s prints from the very start in 1979, long before his name became the title in 2007. He owned the place. He nurtured it. He was everywhere at the club, playing the shootouts with his friends, sipping on his Ketel One in the clubhouse, signing autographs upstairs in his office, and yes, walking his dog down Marina Drive.

Ask any of the players who have lived in Orlando — Tiger Woods, Henrik Stenson, Graeme McDowell — and they will be quick to say their children were born in the Winnie Palmer Hospital for Women & Babies.

Nelson retired from a full schedule in the prime of his career, wanting to secure enough money to buy his ranch. He was a stately figure in the game, and he remained deeply involved in his tournament. Palmer probably stayed in the game too long, and no one cared.

He was 75 when he played the Masters for the last time.

He played Bay Hill for the final time a year earlier, and capped it off by hitting driver off the deck and onto the green at the 18th.

What he left behind are stories, too many too tell, because just about everybody has one. And everyone is smiling when they finish telling them.

To complain about which players are not at the Arnold Palmer Invitational is a waste of time. Sure, Palmer paid attention to who played Bay Hill and who didn’t. He once referred to Rory McIlroy not playing in 2013 by saying: “What his name? The No. 1 guy?”

But it was always accompanied by a wink and a smile.

Palmer, above all, was a golfer. He understood schedules. He understood being ready for the Masters. Besides, the Arnold Palmer Invitational field is the strongest it has been for the last decade except for 2013, the year Woods won for the eighth and final time at Bay Hill.

It has been nearly six months since Palmer died. Bay Hill will be another reminder that his void will be hard to fill, if it’s even possible. But the King left behind too many great moments, too many great stories, too many friends.

And that might be the best way for players to honor his legacy, to leave behind more than what they take.