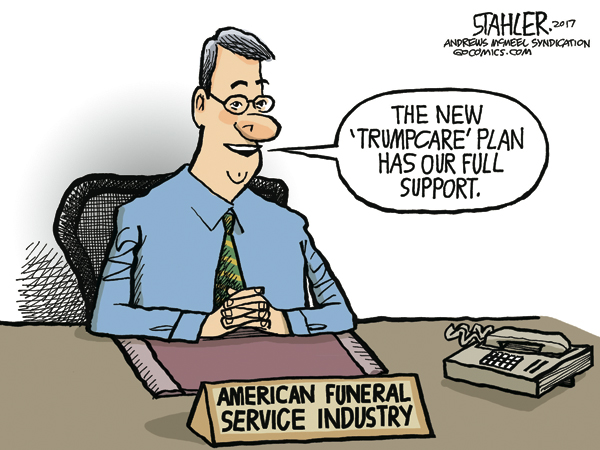 On Tuesday morning, the White House kept up its attacks on the Congressional Budget Office, which has found that the GOP health-care plan supported by President Donald Trump would result in 24 million fewer people with health coverage. As budget director Mick Mulvaney put it on Fox News: “Welcome to Washington, where the CBO says it’s sunny and 75 degrees.”

At the same time, however, the response from certain GOP senators has been far more cautious. The disconnect highlights the real significance of the CBO report for the prospects for the GOP health bill — and for our politics in a broader sense. The CBO has laid bare the GOP’s true health-care priorities with a clarity that has long been absent from the political argument over reform.

It probably isn’t an accident that some senators expressing concern about the CBO score come from states that have opted into the Medicaid expansion. One of CBO’s most startling findings concerns Medicaid: the GOP plan would cut Medicaid spending by $880 billion over 10 years, resulting in 14 million fewer enrollees. Beginning in 2020, it would scrap Medicaid as an entitlement for those eligible for the expansion, by instituting per-capita limits and a reduction in the cost share picked up by the feds.

This would likely result in a greater burden on states, which could lead some states to reduce or restrict benefits, or to opt out of the Medicaid expansion altogether, and thus to a large rollback of assistance to the poorest Americans. This is a big way the GOP bill saves money, enabling it to deliver a massive tax cut to the richest Americans.

This will — or should — put many GOP senators in a very difficult position. If they vote this bill into law, it will mean their states will have to make some very tough choices about their own populations, and many of their own constituents could be harmed. Nearly 20 GOP senators come from states that have expanded Medicaid. (North Carolina did not expand Medicaid.) It’s telling that some of these have already expressed concerns; now they all will have to decide whether to vote to phase out their state’s Medicaid expansions while deeply cutting taxes for the rich.

It should be noted that many Republicans support the priorities embedded in the GOP bill for reasons grounded in real principles. Many sincerely believe redistributive policy is morally wrong; that less-regulated markets are the best way to increase access to affordable coverage and won’t foster dependency precisely because it isn’t an entitlement; that insurance should be more minimal than ACA proponents think it should be; and so forth. And they often make general versions of these arguments.

But many Republicans have deceptively refrained from being forthright about whether they support the specific policy outcomes those priorities would produce, particularly in the short term. Senators who are now expressing concern about losing their state’s expansions have been supporters of repeal. During the 2014 elections, multiple GOP senate candidates ran on repeal while dissembling and evading endlessly on whether they’d also support rolling back their state’s Medicaid expansions.

And then there’s Donald Trump. He has claimed that the replacement he champions will mean “insurance for everybody.” In his speech to Congress, he called for reforms that “expand choice” and “increase access” and “lower costs” while making “health insurance available to everyone.”

Of course, Trump doesn’t really know much about health-care policy or care about the details. But he does know that he’s a winner and Obama is a loser, so his plan simply must and will deliver more than Obamacare for less. The CBO’s answer to that: Sorry, No.

The basic partywide argument has been that if only Republicans could do away with the hated monstrosity of Obamacare, they’d be able to deliver a replacement that delivers health care to everybody (including the poor and sick) while lowering costs and cutting taxes and getting rid of Washington mandates — in other words, a plan that delivers the good stuff in the ACA without the bad.

As long as repeal was not an actual possibility, Republicans could maintain this stance without having to create a plan that would accomplish this, or answer for that plan’s likely outcomes or the true priorities it reflects. Thanks to the CBO, that years-long dodge is no longer possible.

It’s hard to say whether this will end up forcing GOP senators to turn on the plan in large enough numbers to kill it. But at least it will be harder for them — and Trump — to evade responsibility for what their party’s plan would actually do.