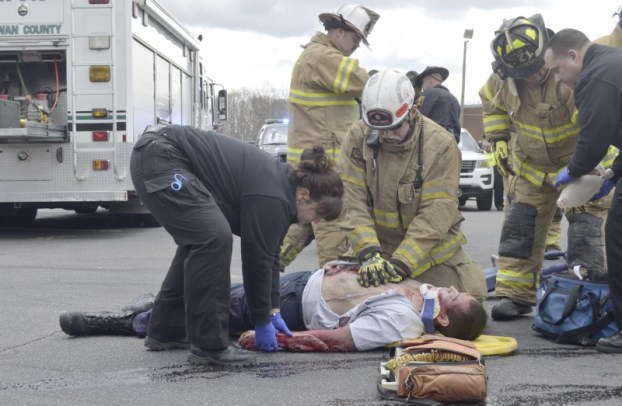 Editorial: Gone in a split second

Less than a second — 0.7 of a second — can make a lifetime of difference. That’s all the time it takes for a person to snap on a seat belt.

That was one of the messages vividly driven home for East Rowan High School students in a heart-breaking dramatization on Tuesday. They saw an accident scene, complete with the driver pinned in his car, and heard a mother’s anguished screams as she learned her son was dead.

The impact was undeniable.

Local agencies helped make the presentation in partnership with a Greensboro nonprofit, Vehicle Injury Prevention for a Very Important Person — VIP for a VIP. Not everyone who participated in the activities was acting, though. Program director Bobby Bulla, a retired High Point fire captain, said his son died in a head-on collision with a tractor-trailer. Jennifer Shoe lost her son Hunter Schenck, 18, in a crash on Goodman Lake Road last June. These people spoke from genuine pain.

The VIP program helped open students’ eyes to the rest of the story. When a young person dies in an accident, it doesn’t just cut that person’s life short. The loss devastates parents and friends. A split-second decision — to not wear a seat belt, for example, or to respond to a text behind the wheel — could leave a brother or sister with a void that no one else can ever fill.

Shoe followed up on the event by adding a comment online to the Post’s story:

“I urge all parents to talk with their children about things like this and if they don’t want to listen to you then by all means please contact me and I will be happy to discuss my sweet, loving, beautiful, amazing son’s death with them also.”

Shoe recommends another program that parents should look into, Doug Herbert’s BRAKES driving class in Concord.

The people who brought the VIP program to East Rowan performed a public service for those students, their families and the community at large. The message bears repeating day after day, month after month, year after year. In 2014, 2,270 teens in the United States ages 16–19 were killed  — six a day.

As Shoe said, “I wanted these kids to really know it doesn’t have to be like that — that cellphone call, that text, is not that important.”

Editorial: Our state of potential

The current leadership of the N.C. General Assembly did not invent economic recovery or budget surpluses. North Carolina has rebounded... read more