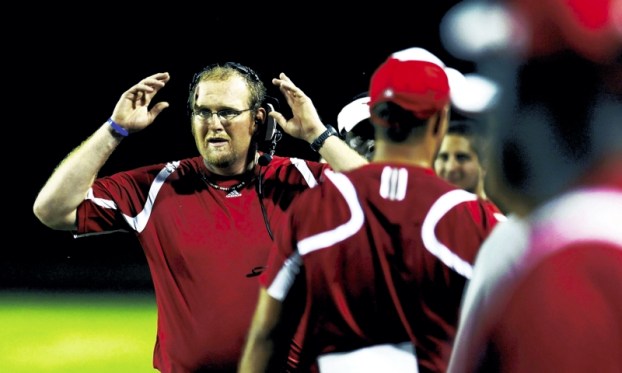 Salisbury Post file photo ... Brian Hinson, shown coaching East Rowan during a game early in the 2009 season, has returned to the prep ranks after seven years as an assistant coach at Catawba College. Hinson is the new head coach at Salisbury High School. Packing up included the discovery of a cardboard box stuffed with childhood memories.

“I found a notebook from middle school where I’d drawn up a bunch of football plays,” Hinson said with a laugh. “I didn’t know then what I know now. I hope I can draw up some better ones now.”

While Hinson has known since he was 13 years old that he wanted to be a football coach, it took years to figure out exactly what kind of coach he wanted to be. He turned 40 in February, and now he knows. He’s been a college coach and he’s been a high school coach, but he’s convinced coaching high school youngsters is his calling.

Hinson assisted at North Rowan High shortly after his All-America playing days at Catawba College ended. From 2007-09, Hinson was head coach at East Rowan High with pretty solid results, including one of the more exciting teams in East history in his final year.

“One of the first questions I was asked in my interview at Salisbury was, ‘Was it a mistake to leave East Rowan?'” Hinson said. “My answer was that, no, it wasn’t a mistake. I was 31 or 32 then and I had goals and dreams as far as coaching college football. If I hadn’t taken the o-line job at Catawba when it was offered, I might have regretted that decision the rest of my life, wondering what might have been. You learn as you go. Now I’m sure the most positive impact that I can have, the biggest difference that I can make, is with the high school kids. That’s what I want to do.”

Hinson was a good coach in his days at East. Two of his three teams were winners, but he’s certain he’ll be a better coach now.

“When I was East, I was always thinking about moving up, taking that next step, getting back into college coaching,” Hinson said. “Now I know where I want to be.”

Hinson grew up in the small town of Star, N.C., in Montgomery County, population 850.

He was part of a working family, not poor, but a long way from rich.  Hinson’s father preached and worked blue-collar jobs. His mother, Sandra, cleaned houses and cleaned buildings before she went to trade school and became a beautician.

He learned the value of a dollar and he learned football. His father adored the game, and Hinson’s three older brothers played it hard. Hinson grew tough physically by getting smacked around in backyard games by those older siblings.

Hinson became a standout on the field and in the classroom at East Montgomery High. He was president of his senior class, but there was never any sense of entitlement.

“There were a lot of Fridays when I played in a football game and got up early on Saturday morning to work in a restaurant,” Hinson said. “Cutting potato wedges, washing dishes, wiping tables, frying hush puppies.”

Hinson’s life changed the night Catawba offensive line coach Jamie Snider came to scout him. Snider had been informed — maybe by a rival school — that Hinson was 6-foot-1, 250 pounds. But Snider found himself  looking at a guy who was 6-4, 270, and he was almost jumping out of his seat. Snider knew Hinson would look great in a Catawba uniform, but no one anticipated just how far Hinson would go.

Catawba landed Hinson. Once Catawba head coach David Bennett got into a living room, it didn’t take moms more than five minutes to know they wanted their sons to play for him. Bennett didn’t talk about football much. He talked about their sons going to church and growing up to be college graduates who were good fathers and good husbands.

In 1995, Hinson was a redshirt with the Catawba Indians, a program in the infant stages of a rebuilding process engineered by Bennett.

“I remember walking to a 6 a.m. practice during that redshirt year and wondering what in the world I was doing there,” Hinson said. “But there weren’t many thoughts about quitting. Quitting meant going back home and working in a factory.”

In 1996, as a redshirt freshman, Hinson became the Indians’ starting left tackle. By 1997, he was second team All-SAC. In 1998-99, he was an All-American. As a senior he won the Jacobs Trophy that goes to the South Atlantic Conference’s top offensive lineman. He earned a P.E. degree and the Gordon Kirkland Award that goes to Catawba’s top male athlete.

Hinson’s first stop after graduation was North Rowan High. He learned a few wrinkles from an offensive genius named Roger Secreast, who had North running a spread offense 15 years before most of the world.

Then Hinson joined Bennett and many other former Catawba staffers, including current Catawba head coach Curtis Walker, at Coastal Carolina University. By 2005, Hinson owned a masters in elementary education and a Big South championship ring.

That’s when he returned to Rowan County, his wife Shanna’s home and his adopted home. Going to work at East Rowan, he was offensive line coach, then offensive coordinator, and then head coach. His overall record in three seasons as head coach was 17-19. There was an humbling 1-10 between two winning seasons, so he experienced just about everything.

After a 9-4 record in 2009 that included a victory in the state playoffs — East’s first playoff win since 1997 — Hinson got his chance to follow his college dreams as a member of Catawba’s staff. He worked under Chip Hester, and then Walker.

“Something I remember from my last year as a high school coach was some of the East players telling me, ‘Coach, thanks for making me a better person,’ ” Hinson said. “That’s always stuck with me, and that’s what I want do now at Salisbury. Some of these kids have the ability to play in college, and that’s great. But almost all of them will be fathers and husbands. The No. 1 goal for me is going to help make them better ones.”

Hinson has two daughters, Elinor, 9, and Elsie, 5, who will now be two of the Hornets’ biggest fans.

There’s some rebuilding to do before there’s much for the kids to cheer about.

For a number of reasons, the  Hornets have experienced four straight losing season since Pinyan left for Carson High.

Hinson, who officially will begin his duties at Salisbury on March 20, prefers to look ahead, not behind.

On March 20, Hinson will start putting a staff together, start talking to players and prospective players, and begin preparations for spring practice and off-season workouts. Coaching high school football is a year-round job now.

“I’m not saying there are going to be any miracles,” Hinson said. “But Salisbury is a place where you can build a strong program. Our goal will be to get Salisbury back to being a force in the state in 2A.”

Fifty years ago it was March Madness for ASU, Sprinkle

By Mike London mike.london@salisburypost.com ROCKWELL — There are few experiences more discouraging for a young man than not seeing his name on... read more