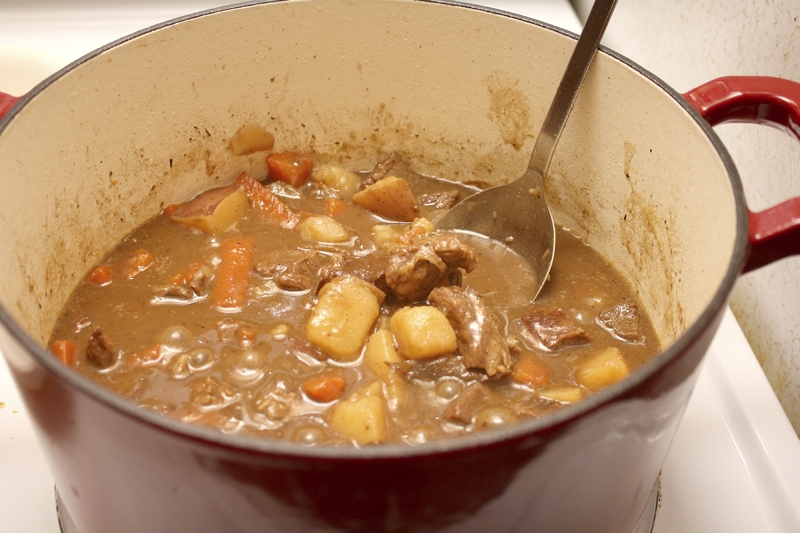 Stephen Smith/For the Salisbury Post A bubbling pot of Irish stew is full of simple ingredients, making it a great comfort food.

Buy your corned beef and cook your cabbage to celebrate St. Patrick’s Day. Serve it with green beer, if you like that sort of thing.

But at my house, it’s going to be Irish stew and soda bread, more traditional foods. But even my traditions (my great-grandparents came from Ireland) are not fully authentic. They’ve been influenced by American tastes, though we haven’t strayed too far from the fold.

St. Patrick’s Day, by the way, is not just an excuse to wear Leprechaun hats and “Kiss Me I’m Irish” buttons and drink rivers of green beer. In fact, I don’t think anyone in Ireland dyes their beer green. If it’s Guinness, it’s almost black anyway.

It’s the feast day of St. Patrick we’re celebrating. March 17, the saint’s religious feast day and the anniversary of his death in the fifth century, has been observed as a religious holiday for over 1,000 years.

The holiday usually falls in Lent, the season of preparation leading up to Easter. On St. Patrick’s day, the usual prohibition against eating meat during Lent was lifted, and folks would dance, drink and feast, celebrating Ireland’s patron saint.

The first St. Patrick’s day parade was where? New York City, on March 11, 1762, with Irish soldiers who served in the English military parading and playing their Irish music.

When the Great Potato Famine hit Ireland in 1845, about a million poor, undereducated Irish came to America. The were portrayed as violent monkeys and could not find even menial jobs.

Later, the Irish became a political power in America, and now, Ireland is using the popularity of St. Patrick’s Day in America to attract tourists to a multi-day festival in Dublin.

3-4 red skin potatoes (depending on size)

Trim excess fat from chuck roast and cut into 1-inch cubes. Peel and cut onion in a medium dice. Peel carrots and cut into chunks, cutting wider carrots in half to decrease cooking time. Cut potatoes about the same size as the meat.

Heat a large Dutch oven over medium high heat. Sprinkle beef liberally with kosher salt (larger crystals) and freshly ground black pepper. Add about 2 tablespoons olive oil to the pan and let it heat until it’s shimmering. Add beef. You may have to do this in two batches. You want all the beef in a single layer on the bottom of the pan. Cook the meat until a brown crust forms. After all the meat is browned, add onion. You may have to add about a teaspoon of additional oil. Cook until onion has slightly softened. Sprinkle flour over the onion and stir, scraping up brown bits from the bottom of the pan. Stir flour and onions for about 3 minutes, then carefully pour in beer. It will foam up immediately. Once foam begins to subside, add the beef stock and carrots. Add the bay leaves and thyme. Cover, bring to a boil and continue to scrape bottom of pan to lift up browned bits. Reduce heat, cover and simmer for one hour. Add potatoes and additional salt to stew and continue cooking, about 1 hour, stirring occasionally.

Serve stew when meat is tender and potatoes are soft, with a sprinkling of fresh parsley, if desired.

Many Irish stews use lamb, which is a lighter, more tender meat than beef chuck roast. If you do use lamb, cut down on the Guinness and substitute water.

The Guinness gives just a hint of earthy bitterness to the liquid and would overpower the delicate lamb.

When it comes to Irish soda bread, there’s plenty of controversy. What is REAL soda bread made of? Does it have eggs (not traditionally), do you use buttermilk? Is there any sugar in it, and what’s this about raisins, or caraway seeds?

Do you make it with wheat flour or white flour?

And what is this cream flour they’re talking about?

To spare you the entire research paper version of Irish soda bread, here are the essentials: You need flour, baking powder or baking soda, butter or shortening, a little salt. Buttermilk gives the bread a better rise and more tender texture.

Brown soda bread is common in Ireland, and cream flour is made by a company called Odlum’s. It’s said to be a bit like cake flour, but all-purpose flour is probably the best choice for American kitchens.

The buttermilk used in those days was the full-fat version, but today’s lower fat buttermilk will work; the bread won’t be quite as rich.

Soda bread is not a keeper. It’s made to be eaten the day you make it and that’s it. You make a new loaf the next day. If you do make it and don’t finish it with your stew, keep it in a tightly sealed plastic bag with all the air removed. You can warm it slightly in the microwave, 30 seconds or less.

No matter when you eat it, or what recipe you use, you must serve it with fresh, unsalted butter. Everything is better with a little bit of butter.

Americans like the addition of raisins to give the bread a little sweetness. Some recipes call for raisins and caraway seeds — the seeds that give rye bread it’s distinctive flavor. But in most homes the quick bread — an extra large biscuit, really — is plain.

Raisins add sweetness that balances with your stout stew, or you can save the bread and serve it as dessert, maybe with a nice Irish coffee.

Preheat oven to 375 degrees. Grease a 9-inch cake pan or iron skillet well. Toss the flour, baking powder, salt and sugar together. Cut the shortening into the flour mixture with a pastry cutter or your clean hands, until all the shortening is coated with flour and evenly distributed throughout the mix. Add milk and stir just to combine, then add raisins. Turn out on a well-floured board and knead it a few times, until the dough comes together. Form into a round disk.

Place in the cake pan or skillet and use a sharp knife to cut a cross — X marks the spot — across the top of the bread. These four sections are sometimes known as farls. And farls is another kind of bread altogether.

Bake the bread in a preheated oven 20-30 minutes, until golden brown on top. Tapping on the bottom of the bread should produce a hollow sound when it is cooked. serve warm with lots of softened butter.

If you want to know more about soda bread and it’s history and variations (some recipes use no shortening or butter at all), visit www.sodabread.info, the website of the Society for the Preservation of Irish Soda Bread.

And now, end your evening with a steaming cup of Irish coffee.

Again, let’s stick with simplicity. First of all, you must buy good Irish whiskey. My grandparents always had Jameson.

Make a pot of strong coffee.

Mix 4 parts of hot coffee (4 ounces), two parts of Irish whiskey (2 ounces) and 1 teaspoon of brown sugar. Top with freshly whipped cream. The idea is to drink the coffee through the cream.

That’s it. No other liquor or liqueur necessary.

If you want a Baileys Irish Coffee, try this:

Mix coffee, Baileys and Irish whiskey in a mug or glass and top with whipped cream.