Frank and Jimmie: After 65 years together, ‘every day is a special gift’ 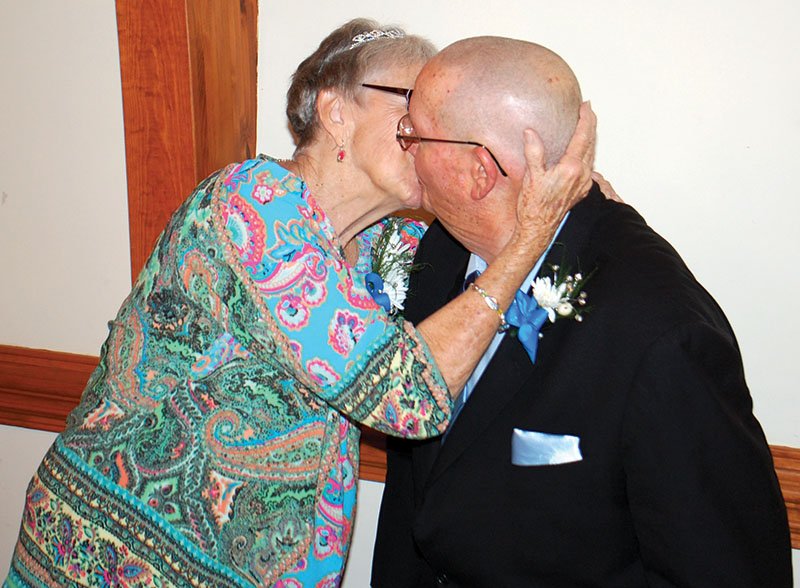 Mark Wineka/Salisbury Post Jimmie and Frank Melton share a kiss in celebrating 65 years of marriage. The couple eloped when he was 18 and she was 16.

KANNAPOLIS — Jimmie and Frank Melton met as kids when she was cast as Mary and he was given the role of Joseph in a church Christmas pageant.

By the time they were teens, the couple were madly in love — so much so they eloped, driving down to Chesterfield, S.C., to be married March 15, 1952, and motoring back to Kannapolis the same day.

Frank was 18; Jimmie 16, and still in high school. They didn’t tell their parents for a month they were married. In fact, the day they were wed, Frank had to be back at his house by 11 p.m. — his curfew.

On Sunday afternoon, almost 65 years later, friends, family, former neighbors and coworkers surprised the Meltons with a party in the fellowship hall of Bethpage Presbyterian Church. Micah Ennis, their daughter, had dubbed the secret mission “Operation Sky Blue,” which if you know the Meltons, perfectly describes their love and inclusive world view.

Jimmie Melton said when you’re young and in love, as she and Frank were, you tend to be hot, eager and can hardly stay apart from each other.

But you learn your love changes as you grow older together. It becomes so much deeper, richer and broader that it’s almost tangible, Jimmie said. She acknowledged they have reached a stage in life — he’s 83 and Jimmie’s 81 — when you find yourself wondering who will die first and how the surviving partner will go on.

Frank and Jimmie Melton live these days in what they call “a growing older apartment” they fashioned at Micah’s house in Faith about four years ago. They like to hang out sometimes at Koco Java in Salisbury, or have lunch at D.J.’s or Capriano’s.

There was a Facebook page dedicated to keeping Sunday’s party secret. And the ultimate trick in getting the Meltons to return to the church around 3 p.m. Sunday was granddaughter Hannah Jackson’s faking that she had left her keys back in the choir room at Bethpage.

To kill time before that, Micah and Hannah had taken the Meltons to lunch, for ice cream and to Walgreens. At one point, Jimmie protested she wanted to go home and take a nice afternoon nap.

Jimmie acknowledged she had become suspicious that the date of their anniversary party had changed — Micah had told her parents to expect a small, mostly family gathering next Sunday, the 19th. But Jimmie’s antenna went up when she saw Micah making her pimento cheese Saturday and also when she spotted a car with a S.C. license plate in the church parking lot.

Frank was actually born in Chesterfield before moving to Kannapolis when he was 1, and he still has a lot of kin in South Carolina.

The Meltons felt as though they had to elope in 1952 because Jimmie’s mom thought they were getting too serious. She wanted them to break up.

Frank borrowed his Uncle Drew’s car to drive to the Concord Hotel, where he telephoned and made an appointment for getting married in Chesterfield. Frank sold his Benrus watch for $10 so he could pay the necessary expenses.

In Chesterfield, the probate judge was drunk, so the duty fell to his wife, who was a justice of the peace. Back home a month later, when the time came for Frank and Jimmie to tell both sets of parents they were married, they first went to see their pastor and ask his help in breaking the news.

At the pastor’s house, the young couple seemed to talk about everything except the reason they were there. The exasperated pastor finally demanded to know point blank. On learning they were married, he initially assumed Jimmie was pregnant, but that wasn’t the case and, in short. the pastor helped Frank and Jimmie with their parents.

The families joined together in getting the young couple established. With the aid of tutors that summer, Jimmie finished high school.

Frank worked at Cannon Mills for 43 years before he quit to take care of his mother, then later his brother, Bo. His mom died in 2001; his brother, in 2009. The Meltons also faced deep sorrow together in 2006 when their oldest son, David, passed away.

Jimmie has retired three different times. She started out working as an assistant for a Kannapolis dentist, then became an instructor in dental assisting at Rowan Technical College, now Rowan-Cabarrus Community College. She eventually retired as Rowan Tech’s dean of human services.

Jimmie then became a counselor — and retired. Later, she was commissioned as a lay pastor in the Presbyterian Church USA before retiring again.

Over the many decades and while raising their family of three children — David, Aaron and Micah — Jimmie earned bachelor’s and master’s degrees. Frank became known as a hotshot racquetball player at the Cannon Memorial YMCA, and he taught many other Y members the game.

Micah said her parents are lifelong learners and they can never get enough of books, magazines and newspapers. Their volunteer work has included the Kannapolis Area Presbyterian Men, a YMCA Service Club, the Barium Springs Home for Children, Habitat for Humanity and Cooperative Christian Ministries.

“Daddy’s solitude is riding around in the car and taking the scenic route whenever possible,” Micah said, “making a bread and milk run sometimes a half-day affair.”

Jimmie has always liked traveling to the mountains, visiting the New River area in Ashe County, but she said Frank doesn’t like to see her make that trip alone any longer.

When the couple are together at home, they often share a love seat, hold hands, and Jimmie will rest her head on Frank’s shoulder.

After 65 years, granddaughter Hannah said, the Meltons “are still what you would call ‘an item.'”

At their party Sunday, the Meltons were able to do something that escaped them when they eloped. They were finally able to cut a wedding cake.

“Are we doing it properly?” Jimmie asked as she slid the knife through.

She scooped up a piece and with many cameras capturing the moment, Jimmie fed Frank — her Frank — wedding cake that represented 65 years of compromise, patience, forgiveness, giving, caring, love and hard work.

Frank often likes to say “We are truly a blessed people.”

And having been with Frank 65 years, Jimmie said Sunday, “is a blessing without measure.”

Yesterday: A soldier pays his respects to ‘Dr. Charlie’