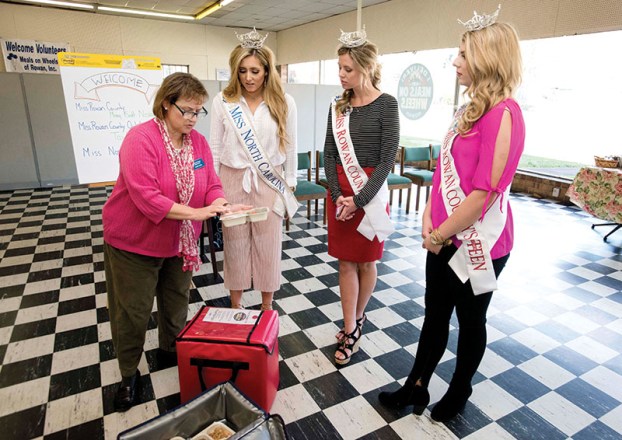 And the winner is … Pageant queens deliver for Meals on Wheels

SALISBURY — What do you say when you open the door and two pageant queens wearing sashes and crowns are there with food in their hands?

B.  Good morning, who are all these people?

C. Wait a minute, let me put on another shirt.

The moment Robinson heard a photographer wanted a shot of her with Faggart and Norris, she excused herself and hurried to get a bright red shirt for the picture.

“I hope I look pretty good,” she said later, posing at her front door with the women.

Elsewhere in Salisbury Tuesday, 15-year-old Miss Rowan County Outstanding Teen Taylor Loyd of Mooresville also was on a Meals on Wheels route. These “celebrity” pageant winners were MOW’s way of calling attention to its year-round mission of getting nutritious meals to seniors in need.

The program depends almost entirely on volunteers. Members of John Calvin Presbyterian Church man some of the routes every second and fourth Friday of a month. Wayne and Sammie Hinshaw served as chauffeurs for Loyd, who is their great-niece.

Claudette Roberts, who has been delivering meals for John Calvin for about five years, drove her car as Faggart and Norris delivered eight meals to seven locations.

Robinson was the women’s first stop. “That’s my lady there,” Roberts said proudly.

MOW volunteers also provide an important check on the welfare of the seniors they visit. Many times, the recipients are living alone.

Faggart, of Concord, said her late grandmother depended on Meals on Wheels, but this was the first time McKenzie had served as an ambassador for the program.

It was a full day for Faggart and Norris. Amy Basinger, executive director of the Miss Rowan County Scholarship Pageant, had the women in her possession for the whole day.

After Meals on Wheels, they planned to visit Shive Elementary, Smoke Pit in Salisbury for lunch, Tiger World near Rockwell and the N.C. Transportation Museum in Spencer.

Basinger also hoped they could deliver doughnuts to the Salisbury Fire and Police departments, to show their appreciation, before ending the day with dinner at La Cava.

Faggart, 21, has been a familiar face in Rowan County this week. She spoke to students at Enochville Elementary School Monday about bullying.

Norris is a senior at Catawba College. In May, she will graduate with a degree in integrated marketing and communications.

Several of the women’s stops with Roberts were in the area of South Clay and East Horah streets and South Martin Luther King Jr. Avenue, but they traveled as far as The Gables on Faith Road.

As you can imagine, they surprised several of the Meals on Wheel recipients who answered their doors.

Denzel Pruitt, a caregiver for his mother, Annieta Bookhart, took the opportunity as did many others to pose with Faggart and Norris on his front porch.

What do you say when pageant queens knock on your door, bringing the gift of a hot meal?

Thanks, always is a good start.

1. Rowan-Salisbury Schools held a summit at the Wallace Educational Forum Friday morning. What did the summit address? A. The... read more