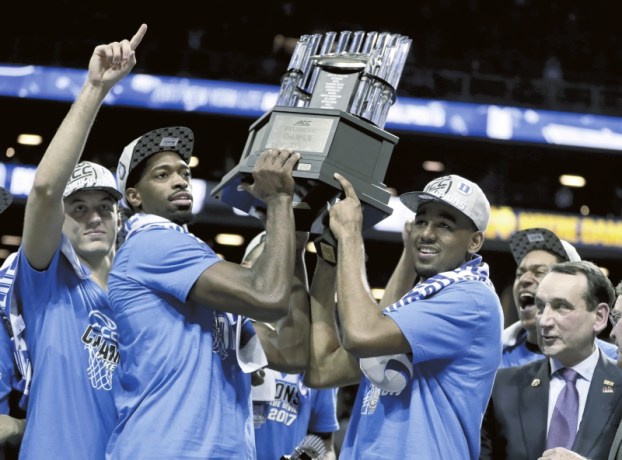 AP College Sports Writer
NEW YORK (AP) — In a season that has been anything but routine for Duke, the Blue Devils won the Atlantic Coast Conference Tournament as it had never been done before.
Jayson Tatum took over in the final three minutes, making key plays all over the floor, and No. 14 Duke became the first team to win the league’s postseason title with four victories in four days by rallying past No. 22 Notre Dame 75-69 on Saturday night.
“We’re extremely tough, and we never say die,” Tatum said. “Especially this last week, we’ve found that out.”
The freshman forward finished a spectacular week in Brooklyn with 19 points and eight rebounds for the fifth-seeded Blue Devils (27-8). Duke won its first ACC Tournament championship since 2011 and its 20th overall, most in conference history. It was the 14th under coach Mike Krzyzewski.
“We’ve won a lot of these, but this one is so different,” the 70-year-old Krzyzewski said. “I’ve been on a lot of good journeys, but this was such a good one.”
Bonzie Colson was a beast for third-seeded Notre Dame (25-9), with 29 points and nine rebounds.
“It’s one of the great performances in championship game history,” said Notre Dame coach Mike Brey, the former Krzyzewski assistant who is now 5-4 against Duke with the Irish.
The Blue Devils came from double digits down in the second half to beat both No. 10 Louisville and No. 6 North Carolina and reach the final at Barclays Center. Then they came from eight back with 11:35 left to defeat the Irish.
“Four games in four days is not an easy task,” Duke guard Grayson Allen said. “At the end of the day, it was all emotion and heart getting us through those games.”
And a lot of Tatum on Saturday night.
He made a running hook to give Duke a 65-62 lead, but Colson’s 3-pointer with 2:25 left tied it.
Tatum hit one of two free throws to put Duke back in front, and then came through with the play of the night. Or make that, the plays of the night.
He blocked Steve Vasturia’s drive to the hoop and then went coast to coast for a layup to make it 68-65 with 1:33 left.
“I thought, ‘What are you doing?” Krzyzewski said about Tatum taking off with the ball. “‘Yes! You did it. How the hell did you do that?’ I thought it gave everyone energy.”
Matt Farrell pulled Notre Dame within two with a couple of free throws before Tatum showed off another skill, driving and dishing to Matt Jones for a 3 to make it 71-67 with 50 seconds remaining. It was Jones’ only basket of the game.
“It was the shot of the game,” Krzyzewski said.
Tatum then all but sealed it, getting behind the defense on an inbounds pass from Jones for a slam while being fouled. Tatum completed the three-point play for a 74-69 advantage with 25 seconds left.
Luke Kennard had 16 points for Duke and was selected tournament MVP, but it was really Tatum’s time in New York. He averaged 22 points and 7.5 rebounds in four games.
BIG PICTURE
Duke: The Blue Devils started the season No. 1 in the country for the eighth time, but the road to this championship has been uneven.
“They’ve been through so much, so they’re close,” Krzyzewski said. “That closeness is what got them through tonight.”
There was Allen’s suspension for tripping an opponent. Krzyzewski missed seven games to have back surgery. Soon after he left, the Blue Devils lost three of four to start 3-4 in ACC play. The nadir was the program’s first loss to North Carolina State at Cameron Indoor Stadium since 1995.
After that game there was a report by ESPN that Coach K, still recovering, held a meeting at his home with players, and forbade them to use their locker room or wear Duke gear.
Allen hurt his ankle and the Blue Devils came to Brooklyn having lost three of four.
Now it all seems to be coming together.
Notre Dame: The Irish can look no further than their 6-for-25 performance from 3-point range to explain why they came up short of their second ACC tournament title in three seasons. VJ Beachem and Farrell each went 1 for 6. That’s a tough way for a team that usually shoots 39 percent from 3 to win.
SENIORS
The championship was especially sweet for seniors Jones and Amile Jefferson, who is in his fifth season at Duke. The last time Duke had gone as long as five seasons without an ACC Tournament title was 1993-98.
Jefferson had 14 points on 7-for-8 shooting and got to carry off the championship trophy.
“We told each other that we weren’t going back to Durham without it,” Jones said.
UP NEXT
Duke: How far will the Blue Devils’ late surge push them up the NCAA seed chart? A No. 1 seed has never had as many as eight losses.
Notre Dame: Another NCAA Tournament awaits the Irish. They have reached the round of eight the last two years.
“We learn from here. We grow,” Colson said. “Just a tough one. But we have a whole new season to go and we still have an opportunity to cut down some nets.”
___
Follow Ralph D. Russo at www.Twitter.com/ralphDrussoAP
___
More college basketball coverage: http://collegebasketball.ap.org/

Dulkoski leads The Revival at the Crescent

By Dennis Davidson dennis.davidson@salisburypost.com SALISBURY — Not many people have enjoyed the unseasonably warm winter as much as Derron Dulkoski.... read more