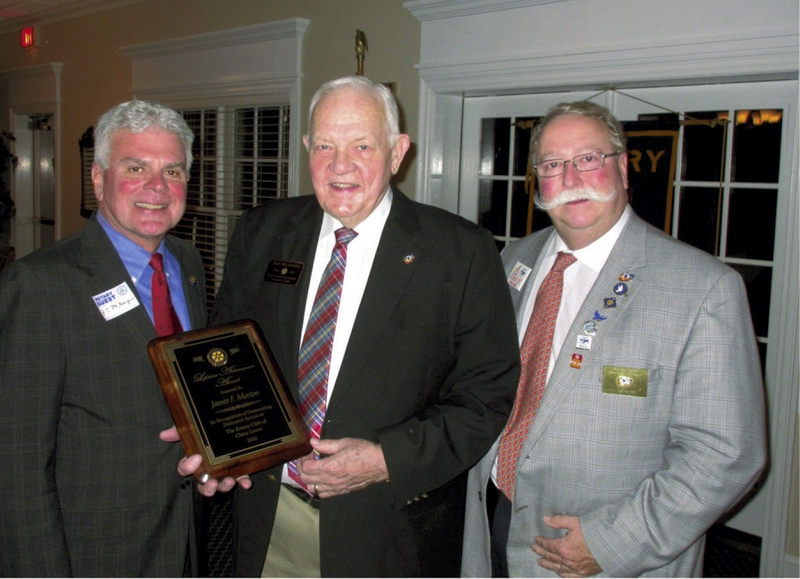 The Rotary Club of China Grove is 80 years old and still going strong. The Club celebrated Feb. 21 with a gala dinner in The Club at Irish Creek in Kannapolis.

The China Grove Club was chartered by Rotary International on Dec. 30, 1936 after having been mentored and sponsored by The Rotary Club of Concord. Later, in 1941, China Grove sponsored the new Rotary Club of Kannapolis. Thus, the three clubs have enjoyed a long kinship of cooperation and collaboration.

Current Concord Club president George Gay spoke briefly and officiated over a ceremonial re-enactment of the presentation of the original copy of the China Grove Charter to China Grove president Rick Johnson. Gay disclosed that The Concord Club president in 1936 was Ray Cline, manager of the local Belk Department Store and later as part owner of Belk-Cline Department Store in China Grove. Ironically, president Rick Johnson is an official of Belk Stores in Charlotte, serving as corporate tax manager. Cline was known as a “gregarious spokesman” for Concord’s business district and a staunch advocate of Rotary’s motto “Service Above Self.”

Key-note speaker, Rotary District Governor Tom J. Smith of Matthews, and president Rick Johnson, reviewed the history and accomplishments of the club including, major contributor and organizer of a funds campaign to construct a large community center in the early 1950s, establishment of Youth Incorporated- a wooded campground on Grace Church Road, leadership in fund raising for the first lighting of a China Grove High athletic field, major contributions to the construction of The J. Fred Corriher (former China Grove Rotarian) YMCA, major contributions to construction of The South Rowan Branch County Library. Additionally, Rotarians have always provided leadership and manpower to such local programs such as The Southern Rowan Christmas Parade, Farmers’ Day, and The China Grove Board of Trade.

The Club provides a $1,000 per year college scholarship each year to a graduate of South Rowan High School and of J.C. Carson High School. It was noted that late Jessie C. Carson, long time renowned county educator and Superintendent of Rowan County Schools was a member and past president of the club.

Two Interact Clubs — one each at South and Carson High Schools are sponsored by the China Grove Club. Interact is a youth organization which provides service in the school and throughout the community. Participating students are trained in leadership and meeting parliamentary proceedures.

The Club also annually sponsors a Manner’s Luncheon — a hands on demonstration of manners training for 5th graders at China Grove Elementary School. It has distributed individual dictionaries to students, back packs with school supplies for underprivileged students and contributed to Main Street Mission. China Grove Rotary always rank high in District 7680 as a major contributor to The Rotary Foundation — the arm of Rotary which manages humanitarian projects throughout the world — and as a contributor to The C.A.R.T. Fund for Alzheimer’s research.

Rotary’s Capstone Project since 1985 has been its commitment to eliminate polio throughout the world. This goal is very close to being achieved. Only three countries remain with polio cases and only one new case has been reported during this year.

Governor Smith commented, “Since its founding, The Rotary Club of China Grove has ebbed and flowed, the textile industry that was the economic engine of the area has largely disappeared, wars and presidents have come and gone and polio no longer haunts the children of our country, but one thing that has remained constant is Rotary International and The Rotary Club of China Grove as a driving force to do good in our local community and the world. I’m sure that this club and its members will continue these good works for the next 80 years.”

President Rick Johnson suggested that the guests and former members of the Club continue to support the Club’s projects and charged the current members to get busy on doing good in the world for the next 80 years.