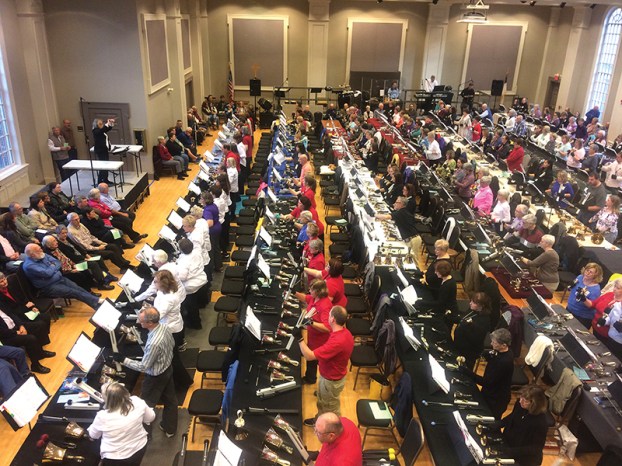 The festival consisted of a one- to two-day workshop that culminated in a 5 p.m. concert on Saturday. Advanced musicians attended a two-hour practice Friday, and all skill levels practiced nearly six hours the day of the performance.

Twenty area churches came to take part in the festival, with individual ringers coming from as far away as Florida. First Presbyterian’s director of music, John Stafford, was thrilled to have these faraway guests.

“I love getting people that aren’t from here to come and see the beauty and the charm of Salisbury,” he said. “Any opportunity that we have to draw people in is good for all of us.”

The Bell Tower Ringers Handbell Festival has not always welcomed such a large number of ringers. When the event began in 2013, around fifty individuals participated.

“Last year, the director of the Raleigh Ringers was our clinician,” Kathy Sang, administrative assistant for the music department at First Presbyterian said. “That was really the beginning of our growth spurt.”

This year, the festival’s clinician was Cathy Moklebust, a South Dakota native who has developed and directed handbell music programs since 1983. Moklebust’s involvement helped grow event registration by 40 percent compared to last year.

The ensemble’s growth has presented its own welcomed set of logistical problems. This year, performers filled the church’s Lewis Hall to near capacity. Space for the audience was – with exception for those with physical limitations – standing room only.

“What a great problem to have,” said Stafford. “I’m thrilled. I see the concert as a goal but not our purpose. Our purpose is to give performers a chance to ring together and a chance to work with and meet big names in the handbell industry.”

New to the event this year, Jeffers Handbell Supply was on-site offering gear and accessories for handbell ringers, directors and enthusiasts alike. Jeffers is a worldwide leader in handbell sales and service, and is based out of Irmo, S.C.

Stafford remarks that his ability to secure such well-known handbell industry names has to do with his years of experience as a handbell director.

The 2018 Bell Tower Ringers Handbell Festival will be held March 16-17 with Sandra Eithun, of Wisconsin, serving as clinician. Eithun has over 300 pieces for handbells in publication.

For more information about the event and to learn how to register for next year’s festival, call 704-636-1321 or visit www.salisburyfirstpres.org.