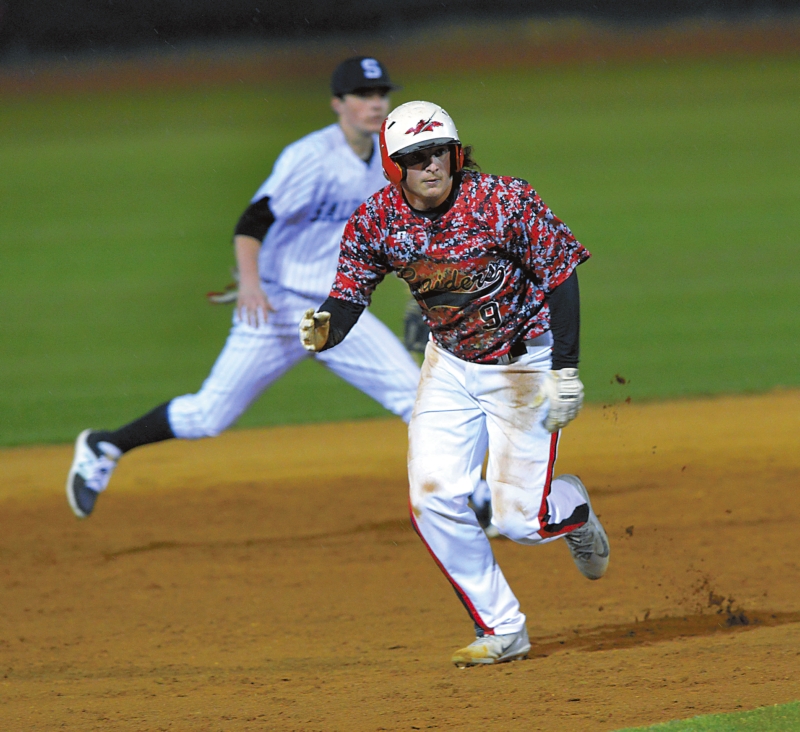 The Raiders are spending the weekend atop the South Piedmont Conference standings after edging host West Rowan, 3-2, on Friday night.

It should be. South scored two unearned runs — the last when courtesy runner Austin Hyde slid across the plate in the top of the sixth inning — and halted West’s three-game winning streak.

“We’re notorious for giving away games early in the year,” coach Seth Graham said after the Falcons (3-2, 1-2) managed only four hits against a trio of South pitchers. “In the past, we’ve always gotten better as we go. Maybe we’re just trying to get some mistakes out of the way.”

West committed three errors, the third when relief pitcher Austin Love threw high and wide on the game’s decisive play at home. It came on a bunt attempt by Fox with runners at the corners and one away.

“Against a pitcher like (Love), who is so tough and has such a sharp breaking ball, you’ve got to be able to find ways to get it done,” winning coach Thad Chrismon said. “You’re not gonna just sit in the box and light him up. We had to work to get that last run.”

South never trailed and took a 1-0 lead against West starter Daniel Durham in the top of the second. There were two out when Fox, a DH hitting seventh in the batting order, used a swing right off a Wheaties box to crunch his first home run of the season.

“I remember seeing the ball and putting the bat on it,” said Fox, who hit a 3-1 pitch. “I wasn’t necessarily aiming for a home run, but that was the outcome. It felt great coming off the bat.”

An inning later, South stretched its lead to 2-0. Chandler Horton coaxed a leadoff walk, took second base on a groundout, third on an error and scored when Walker Joyce reached on a two-out infield hit.

West loaded the bases in the second, third and fourth innings, but only scored once against right-hander Joyce, South’s starting pitcher. Mykal Berger’s RBI-single to left field pulled the Falcons within 2-1 after four complete innings.

“We got good pitches to hit,” said Graham. “We just threw away some at-bats there. You’ve got to get more than one (run) out of all that. But it’s early and we’re still making mistakes.”

Joyce sidestepped further damage by recording a strikeout and hustling to grab Trevor Atwood’s inning-ending pop up on the right side. “We had to play clean there,” Chrismon said. “That was a tough spot and we had to make some big pitches. That easily could have gone the other way.”

It didn’t, but the Falcons tied the score against winning pitcher Matthew Donahue in the bottom of the fifth. Brandon Walton drew a leadoff walk, Olen Stamper buzzed a one-out single into left and Dillon Simpson hoisted a sacrifice fly. That set the stage for Fox, Hyde and Love to decide the outcome.

Camouflaged in the win was the crisp relief work of South junior Tyler Shepherd. The right-hander procured the last six outs, struck out five, walked one and earned his first save. Love suffered the loss despite not allowing an earned run in three innings of relief. He fanned five batters and walked none.

“We kept our heads up and played our game,” said Shepherd. “We got good pitching and the defense made all the plays. It just feels like we’re clicking right now.”

NOTES: This was South’s fourth victory in a week, having defeated A.L. Brown last Saturday. … Fox’s home run was the Raiders’ fourth of the season. … South plays at Cox Mill on Tuesday. West hosts Salisbury in a non-leaguer on Monday, then visits Carson on Tuesday.