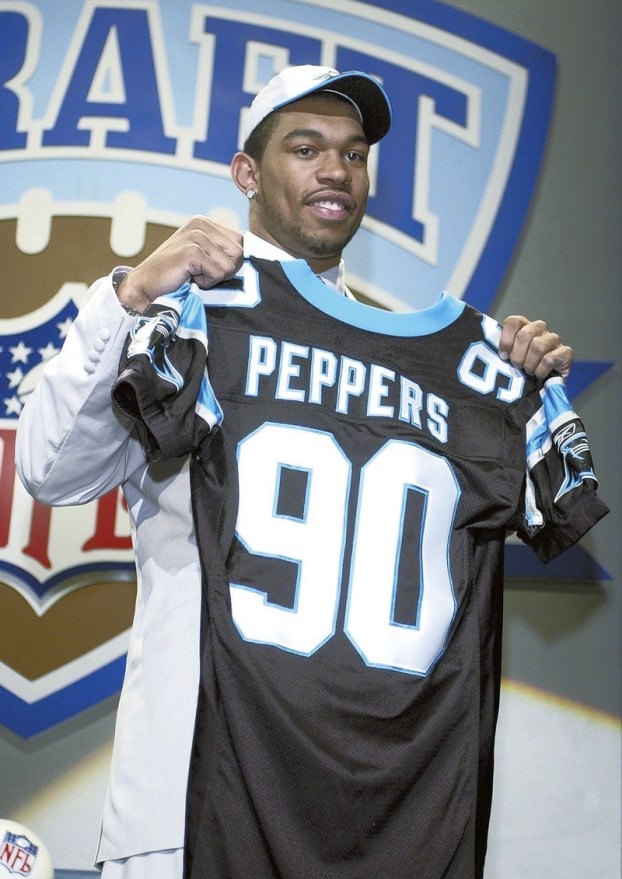 FILE - In this April 20, 2002, file photo, Julius Peppers, of North Carolina, holds up a team jersey after being selected by the Carolina Panthers as their first pick, second overall, in the NFL Draft in New York. After eight years, Peppers is returning home to play for the Panthers. The Panthers agreed to terms on a contract Friday, March 10, 2017, with Peppers, their all-time sack leader, according to a person familiar with the negotiations. The person spoke to The Associated Press on Friday on condition of anonymity because the move can't officially be announced until later in the day. (AP Photo/Ed Betz, File)

AP Sports Writer
CHARLOTTE (AP) — After eight years, Julius Peppers is returning home to play for the Carolina Panthers — and he’ll be joined by a few other free agents, too.
The Panthers agreed to terms on a contract Friday with Peppers, said to a person familiar with the negotiations. The person spoke to The Associated Press Friday on condition of anonymity because the move hasn’t officially been announced.
The length and financial terms of the deal were not immediately known.
Peppers’ agent Carl Carey on Friday tweeted a picture of his client from when he was drafted No. 2 overall by Carolina in 2002 with the words “Headed home.”
After reaching the deal with Peppers, the Panthers continued to make a flurry of moves.
The source also said the Panthers have agreed to terms with Captain Munnerlyn from the Minnesota Vikings. Munnerlyn, who played for the Panthers from 2009 -2013, had 55 tackles last season.
Carolina announced three other free agent signings Friday — wide receivers Russell Shepard from Tampa Bay and Charles Johnson from Minnesota and safety Mike Adams from Indianapolis. They traded defensive end Kony Ealy and a third-round pick (72nd overall) to New England for the Patriots’ second-round pick (No. 64).
The Panthers did lose starting offensive tackle Mike Remmers, who signed with the Vikings, his agent Brett Tessler announced Friday on Twitter. Remmers was made expendable when the Panthers agreed to terms with free agent offensive tackle Matt Kalil from the Vikings on Thursday.
Ealy had three sacks and forced two turnovers in a Super Bowl loss to Denver two years ago but never developed into the dominant pass rusher Carolina was hoping for last season, recording just five sacks.
Shepard and Johnson help fill the voids left by the departures of Ted Ginn Jr. and Philly Brown.
The 6-foot-1, 195 pound Shepard spent four seasons with the Bucs and posted career highs of 23 receptions, 341 yards receiving and two touchdowns last season. The speedy 6-foot-2, 217-pound Johnson has spent his first three seasons with Minnesota, posting 60 receptions for 834 yards and two touchdowns.
The 5-foot-11, 205-pound Adams has played 13 seasons in the NFL and was named to the Pro Bowl in 2014 and 2015. He’s expected to be paired another veteran safety Kurt Coleman in the secondary.
The Panthers might not be done signing free agents either. Johnson told reporters Friday night that he bumped into former Vikings teammate Munnerlyn at the Panthers stadium. Carolina has a need at nickel back.
But Peppers’ return was the buzz in the Carolinas.
The 37-year-old North Carolina native has 143 ½ sacks during 15 NFL seasons, including 7 ½ last season for the Green Bay Packers.
Peppers, Carolina’s all-time sack leader, played eight seasons for the Panthers (2002-2009). He was selected to the Pro Bowl five times and named All-Pro twice during that span. Peppers ranks fifth all-time in NFL history in sacks and still holds the franchise record with 81.
His run in Carolina, which included one trip to the Super Bowl in 2003, ended with a highly published contract dispute when Peppers refused to play under the franchise tag because he no longer wanted to play in a 4-3 defensive scheme.
He was eventually given his outright release and signed with the Chicago Bears, who played a 3-4 defensive scheme at the time. Peppers was booed harshly when the Bears on returned to Charlotte to play against the Panthers on Oct. 10, 2010 — a game the Bears won 23-6.
Despite his age, the 6-foot-7, 287-pound Peppers continues to play at a high level.
He’s spent the last three seasons with the Packers, recording 25 sacks during that span while playing under defensive coordinator Dom Capers, a former Panthers head coach.
Peppers’ contract with the Packers expired after last season making him an unrestricted free agent.
___
For more NFL coverage: www.pro32.ap.org and www.twitter.com/AP_NFL