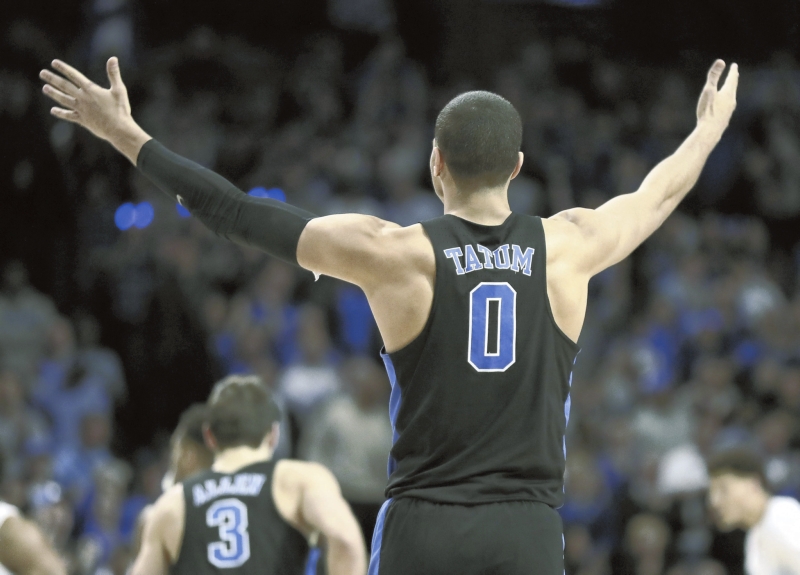 Duke forward Jayson Tatum (0) motions to teammates in the second half of an NCAA college basketball game against North Carolina during the semifinals of the Atlantic Coast Conference tournament, Friday, March 10, 2017, in New York. Duke won 93-83. (AP Photo/Julie Jacobson)

NEW YORK (AP) — This time they clashed up north, and Duke took down Carolina.

Jayson Tatum scored 24 points and No. 14 Duke rallied past No. 6 North Carolina with another lightning-fast surge in the second half, taking advantage of foul trouble for Tar Heels point guard Joel Berry II and beating its fierce rival 93-83 on Friday night in the Atlantic Coast Conference semifinals.

Luke Kennard had 20 points and Grayson Allen added 18 off the bench for the Blue Devils (26-8), who will play for the tournament title Saturday night in Brooklyn against No. 16 Florida State or No. 22 Notre Dame.

“It’s like night and day from the one stretch when we were 1-4,” said Tatum, averaging 23 points in three ACC Tournament games. “We’re clicking at the right time.”

By winning the second game between the teams in seven days, fifth-seeded Duke took two of three in the season series against the top-seeded Tar Heels (27-7). It was their first ACC Tournament matchup since the Blue Devils won the 2011 championship game.

The rubber match this year was settled on the streets of New York City rather than Tobacco Road, some 500 miles from the Dean Dome and Cameron Indoor Stadium as the ACC brought its postseason showcase to the Big Apple for the first time.

Regardless of the locale, this edition of the storied rivalry contained many of the usual elements — complete with players and roaring blue-clad fans from both teams taking issue with the officiating.

Perhaps the primary missing staple was a tense finish after Duke outscored defending champion North Carolina by 15 points during a 10-minute span while Berry was on the bench with four fouls. The decisive spurt put the Blue Devils ahead 77-70 after Allen hit Harry Giles for an alley-oop slam with 5:30 left, and they cruised home from there.

“It was brutal. I hate that I was on the bench,” Berry said. “I put the blame on me. … I just wish I was out there to help them and be able to compete, but it got taken away.”

Berry, the tournament MVP a year ago, scored 28 points in a win over Duke last week.

Kennedy Meeks had 19 points and 12 rebounds for the taller, deeper and more experienced Tar Heels, who dominated inside early but blew a 13-point lead in the second half. They squandered a chance to tie Duke for the most ACC Tournament titles and might have cost themselves a No. 1 seed in the NCAAs.

Freshman guard Frank Jackson added 15 points for Duke, which quickly climbed out of a 12-point hole in the second half of Thursday’s quarterfinal win over No. 10 Louisville.

Showing some impressive stamina, Duke won its third game in three days against a conference rival with a winning record. No team has won four games in four days at the ACC Tournament.

“We can’t make the excuse it’s the third game in three days,” Tatum said. “Never say die. Coach instills that in us. It’s just incredible for us what we’re doing.”

Back home where the schools are separated by about 10 miles, they split two intense games over the past month — with each program winning on its own court. North Carolina beat the Blue Devils 90-83 last Saturday in the regular-season finale.

Their latest tussle took place on one of the busiest blocks in Brooklyn. And no doubt, the opportunity to showcase college basketball’s best rivalry in the nation’s largest media market was exactly the dream scenario the ACC envisioned when it moved its postseason tournament north this year — a touchy topic down south that boiled up again this week.

So when Duke and Carolina both won Thursday, it brought a true taste of Tobacco Road to the home of Nathan’s Famous hot dogs, smack in the middle of the bustling borough that hosted baseball’s most passionate regional rivalries once upon a time: Giants-Dodgers, and Yankees-Dodgers.

It was the fifth time the teams played outside the state of North Carolina — three at the ACC Tournament in Atlanta, plus a Tar Heels victory in the 1971 NIT semifinals at Madison Square Garden.

Both schools are loaded with area alumni, though, and the Barclays Center stands were bathed in both shades of blue after a snowy morning in New York, where the Empire State Building was lit in ACC school colors at sunset.

Duke: Playing before a sellout crowd of 18,109, the Blue Devils improved to 13-8 against UNC at the ACC Tournament and 98-44 in the event overall, breaking a tie with the Tar Heels for the best record in the tournament’s 64-year history.

North Carolina: Fell short in its attempt to become the first team to repeat as ACC Tournament champion since Duke (2009-11). The Tar Heels had won their last five semifinal games.

Isaiah Hicks had 19 points for the Tar Heels and ACC player of the year Justin Jackson scored 16 on 6-of-22 shooting.

Jackson also struggled from the field last Saturday against the Blue Devils. … Meeks did not score in the final 13:52.

Duke: Goes for its 20th ACC Tournament championship Saturday night against second-seeded Florida State or third-seeded Notre Dame. North Carolina is next with 18.

North Carolina: Probably no worse than a No. 2 seed when the NCAA Tournament pairings are announced Sunday.