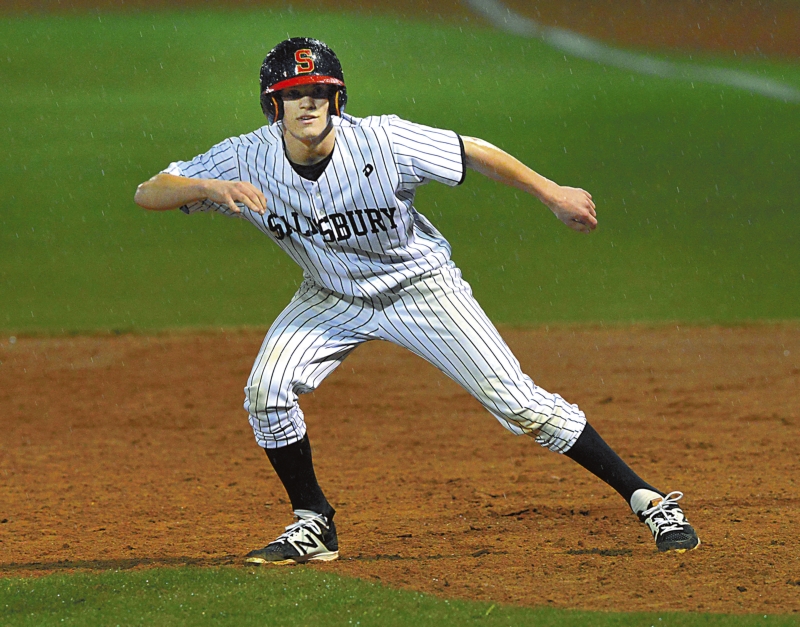 The game was the CCC opener for both teams. Overall, Salisbury improves to 2-3 while Thomasville falls to 1-5.

Coach Mike Herndon’s Hornets were off and running from the start, with four stolen bases in the first inning when they scored five runs.

Thomasville had scored an unearned run off of Salisbury starter Joe Steinman (1-1) in the top of the first frame.  Steinman led off the bottom of the inning with a walk and promptly swiped second and third bases against the Bulldogs’ battery of pitcher Caleb Powell and catcher Brandon Hocutt.

Powell then balked in Steinman with the tying run.  Bo Rusher plated a run with a single and Jack Fisher knocked in a run with a groundout in the first inning, before the scoring was capped on a two-run double off the bat of Will Taylor.

Salisbury improved its lead to 7-1 in the second inning when Chandler Lippard doubled in Rusher and then scored himself later in the frame on an error by Hocutt.

The Hornets added two more runs in the fourth inning when Griffin Myers led off with a single and came home on a groundout from Lippard. Freshman Blaine Shellhorn singled in Rusher, who had been hit by pitch and was advanced by another balk.

Powell tripled in a run for Thomasville in the top of the fifth inning off of Steinman, making it a 9-2 game.

It still appeared that Salisbury might win in the bottom of the inning with the 10-run mercy rule, even though the frame started with Thomasville left fielder Seth Passmore running down a long smash off the bat of the Hornets’ Hut Smith.

Pinch-hitter Jonathan Hilliard followed with a double over the center fielder’s head. Hilliard stole third base and came home a groundout from Steinman.

Thomasville replaced Powell on the mound with freshman Carlton Hogan, who promptly walked Myers and Rusher. Two straight wild pitches scored Myers and Rusher stood at third. However, Rusher was then cut down at the plate, trying to steal the game-ending 12th run.

Taylor followed Steinman on the mound for Salisbury in the sixth inning and retired three of four hitters.

In the bottom of the inning, Lippard led off with a single, swiped second base and advance to third on a groundout by Fisher. Shellhorn then tagged a long drive to center field, deep enough for the sacrifice fly that scored Lippard, giving the Hornets a 10-run lead and the win.

The win snapped a three-game losing skid for the Hornets, after a 2-1 season-opening victory over South Rowan. Salisbury returns to action on Monday with a 7 p.m. game at West Rowan.