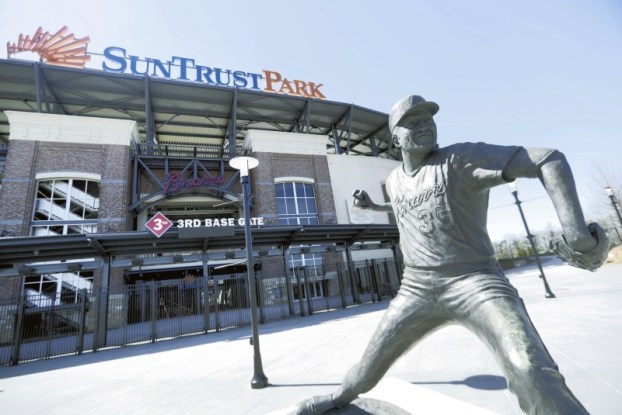 A statue of former Atlanta Braves pitcher Phil Niekro stands outside an entrance to the Braves' new baseball stadium in Atlanta, Thursday, March 9, 2017. With only about three weeks remaining before the Braves return from spring training to play the Yankees in an exhibition game, finishing touches are being placed on the team's new suburban SunTrust Park. (AP Photo/David Goldman) Construction crews work on the infield at SunTrust Park, the Atlanta Braves’ new baseball stadium in Atlanta, Thursday, March 9, 2017. With only about three weeks remaining before the Braves return from spring training to play the Yankees in an exhibition game, finishing touches are being placed on the team’s new suburban SunTrust Park. (AP Photo/David Goldman)

Most of the hard work is complete.

“We are completely through with the major elements of the construction of the ballpark,” Braves president of business Derek Schiller said.

That leaves about three weeks for finishing touches before the first official unveiling when the Braves play the New York Yankees in an exhibition on March 31. Only season-ticket holders are invited, and Schiller says a crowd of about 20,000 is expected.

Schiller acknowledged the new park must be accompanied by improved play from the Braves, who finished last in the NL East in 2016.

“We came out of two years in a row where we struggled as a team and conversely struggled at the gate,” he said. “It’s not lost on us we have to deliver two things at once. We have to make sure the baseball environment at this new ballpark has everything to offer, and I believe will satisfy even the most discerning baseball fans. Then we also have to deliver a very good baseball team.”

There will be open ticket sales for a Georgia-Missouri college game on April 8. That will be the final public trial run before Atlanta’s home opener on April 14 against San Diego.

The biggest attraction for the Braves’ new home may be the mixed-use development being built around the park. A crane still hovers over a hotel directly behind the stadium.

Schiller said some restaurants, bars and a concert venue around will be ready for the start of the season. He said more will open during the season.

SunTrust Park is located in the suburbs, about 15 miles north of the Braves’ old Turner Field.

Georgia State University purchased Turner Field, which will be converted to a football stadium to be used this season. A new baseball stadium for the school will be built on the property at the site of old Atlanta-Fulton County Stadium.

SunTrust Park has the feel of a traditional stadium, with green seats and some brick walls and a large canopy. It also has a modern feel with LED lights and “internet capabilities unlike any other sports venue in the country,” Schiller said.

“It should be the fastest Wi-Fi and internet speeds of any ballpark as well as any mixed-use development in the country, if not the world,” he said.

The new park has an interactive area for kids, including a zip line and a climbing tower.

The Chophouse, a restaurant and bar in right field, features outdoor seats with cooling cup holders. The bottom floor, on field level, allows fans to look through a chain-link fence only a few feet from the right fielder.