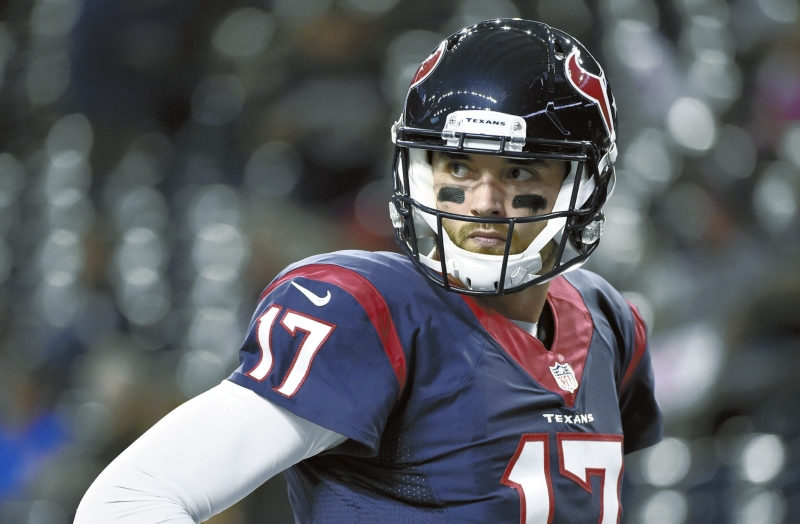 FILE - In this Oct. 16, 2016, file photo, Houston Texans' Brock Osweiler (17) prepares for an NFL football game against the Indianapolis Colts in Houston. The Texans traded Osweiler to the Cleveland Browns on Thursday, March 9, 2017.

The Panthers, traditionally conservative with their free agency spending, opened with a bang Thursday. They agreed to terms with unrestricted free agent left tackle Matt Kalil on a five-year deal worth $55.5 million, a person familiar with the situation told The Associated Press. Of that, the person said $25 million is guaranteed. The person spoke on Thursday on condition of anonymity because the team hasn’t announced the move.

The deal is the largest ever given out by the Panthers to an incoming free agent.

Kalil, who spent five seasons in Minnesota after being selected fourth overall in the 2012 draft, will play with older brother Ryan Kalil, Carolina’s two-time All-Pro center.

The 27-year-old Kalil played in all 64 games his first four seasons in Minnesota, but missed 14 in 2016 due to a hip injury that required surgery.

Carolina needed a left tackle with Michael Oher’s career uncertain due to a concussion.

The 6-foot-6, 306-pound Kalil has played left tackle his entire career, so it is expected Oher will move to right tackle — assuming he can play.

CLEVELAND (AP) — The Browns found a “franchise quarterback,” just maybe not their own.

And whoever winds up behind center in Cleveland will be well protected.

With an eye on making another move at quarterback, Cleveland acquired veteran Brock Osweiler and a 2018 second-round pick on Thursday in a stunning trade with the Houston Texans, who were looking for a partner to help them get rid of the QB’s $16 million guaranteed contract.

At first, the unusual trade was met with the usual, Browns-being-Browns skepticism.

However, the deal was made simply to give Cleveland more assets to perhaps trade for another QB such as New England backup Jimmy Garoppolo, and it allows the Texans to clear some salary-cap space to make a run at a starter.

They have not yet decided what they’ll do with Osweiler, and his arrival does not necessarily affect any decisions on Robert Griffin III, who is due a roster bonus this weekend.

But having Osweiler — and another high draft pick — provides the Browns with more ammunition to finally get their messy quarterback situation cleaned up. It’s possible they’ll try to entice the Patriots to move the 25-year-old Garoppolo, who won two starts last season while filling in when Tom Brady was suspended.

With nearly $102 million in salary-cap space to start the day, the Browns were in a position to take on Osweiler’s contract and essentially paid $16 million for another high draft pick.

“Draft picks are extremely important to our approach in building a championship-caliber football team. We are intent on adding competition to every position on our roster and look forward to having Brock come in and compete.”

However, it’s possible the Browns, who now have 11 picks in this year’s draft, will move Osweiler long before he sees a field in Cleveland.

Osweiler went 8-6 in 14 starts for Houston last season. The Texans are in the market to upgrade the position, and there’s a strong chance they’ll take a run at Tony Romo, expected to be traded or released by the Dallas Cowboys.

“We are committed to bringing a championship to the city of Houston,” said Texans vice president of football operations Rick Smith. “We are exhaustive in our efforts and the resources provided by the McNair family allow us to operate that way. We continuously evaluate our decisions and processes to ensure the results match our goals and objectives. The decision to trade Brock was made because it was in the best interest of the team.

“It frees up both cash and salary cap room to continue to improve our football team. We appreciate Brock’s effort and leadership while he was with us and we wish him and his family well.”

The 6-foot-7 Osweiler is in his sixth NFL season. He signed with Houston as a free agent last year after four seasons in Denver.

Not long before striking the deal with Houston, the Browns got Zeitler, considered by some as the top lineman available in free agency. He’ll be reunited with coach Hue Jackson, who served as Bengals offensive coordinator for two seasons.

“I think Kevin is one of the premier right guards in football,” Jackson said. “I believe he’s going to be a really good football player for us at a position of need, and I think he’ll do a great job.”

Cleveland’s line was ravaged by injuries last season and gave up a league-high 66 sacks (17 more than any other team), something Jackson had made a priority when he was hired by the Browns. But with Zeitler and Tretter joining Bitonio and perennial Pro Bowl left tackle Joe Thomas, one of Cleveland’s biggest weaknesses is now a strength.

Tretter has been slowed by injuries, but he’s an upgrade over 2015 first round-pick Cameron Erving, whose next move could be to right tackle.

Britt gives the Browns another playmaker, and insurance in case Terrelle Pryor signs elsewhere. Britt caught a career-best 66 passes for 1,002 yards last season for the Rams.

“Kenny’s been a proven playmaker in the National Football League,” Jackson said. “He’s a big guy. He’s fast, tough. He’s made plays in his career, and we’re looking forward to him doing the same thing here.”

Pryor has said he wanted to re-sign with Cleveland, but the sides have not been able to work out a deal.

Oher was solid at left tackle during Carolina’s Super Bowl run in 2015, starting every game. But Oher played only three games last season before walking into the training room complaining of concussion-like symptoms. He was placed in the concussion protocol and has never emerged —even three months after Carolina’s season ended.

When a reporter from NFL Network earlier this week wrote on Twitter that some Carolina players actively recruiting free agent offensive tackle Russell Okung, the wise-cracking Ryan Kalil responded by tweeting, “I’m not.”

Ryan Kalil has said in the past he would love to play with his brother if the opportunity presented itself.

The Kalils will become the first brother to play together on the same offensive line since Jay and Joel Hilgenburg with the New Orleans Saints in 1993. Doug and Dave Widell also played together for three seasons from 1990-92 with the Denver Broncos.

Matt Kalil was picked as an injury replacement for the Pro Bowl as a rookie after enhancing an offensive line that helped pave the way for Adrian Peterson to rush for 2,097 yards in 2012.

The Panthers did lose unrestricted free agent with linebacker A.J. Klein, who announced on Twitter he has joined the division rival Saints.