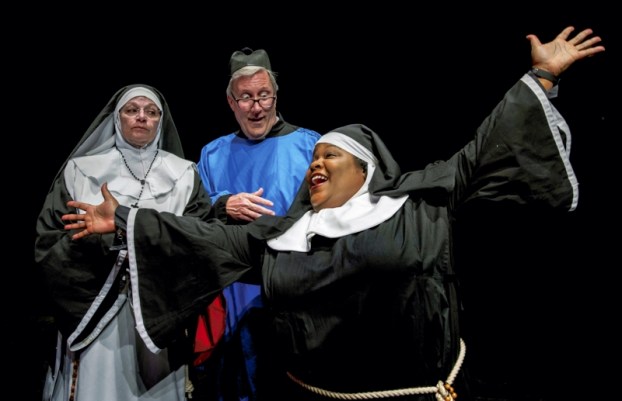 When 1970’s Philly disco diva, Deloris Van Cartier, witnesses a murder, she is put in protective custody in the one place the cops are sure she won’t be found: a convent! Disguised as a nun, she finds herself at odds with both the rigid lifestyle and an uptight Mother Superior. But once she is introduced to the struggling choir at the convent, everything changes, as she discovers she has more in common with her new sisters than she ever could have imagined.

Using her unique style and singing talent, Deloris breathes new life into the church and community but, in doing so, blows her cover. Soon, the gang is giving chase, only to find them up against Deloris and the power of her newly found sisterhood that has given a bigger purpose to her life, showing her a genuine love and affection that she has never known.

Sister Act is a feel-good musical comedy based on the popular 1992 movie, starring Whoopi Goldberg.   Featuring original music by Tony- and 8-time Oscar winner, Alan Menken (Newsies, Beauty and the Beast, Little Shop of Horrors), this uplifting musical was nominated for 5 Tony Awards, including Best Musical and Best Original Score.

The musical originated in 2006 at the Pasadena Playhouse in California before opening on London’s West End in 2009 at the London Palladium. The UK version was produced in part by Whoopi Goldberg (who also briefly played the role of Mother Superior). Goldberg was also a producer of the 2011 Broadway adaptation, which underwent significant rewrites prior to the Broadway premiere.

The Piedmont Players version, opening next Thursday at the Meroney Theater, is directed and designed by Reid Leonard and features musical director Adrian Smith and Choreographer Ashlyn Keller Sumner. Leonard and Smith have collaborated on past PPT hits including Dreamgirls, The Color Purple, Leap of Faith, Ain’t Misbehavin and Hands on a Hardbody. Although this is Sumner’s first time choreographing a PPT production, she made her performance debut as Velma in CHICAGO and has since appeared on the Meroney stage in CATS, The Addams Family and Cabaret.

Filled with powerful gospel music and a truly moving story, Sister Act will leave audiences breathless.  A sparkling tribute to the universal power of friendship, Sister Act is reason to REJOICE!