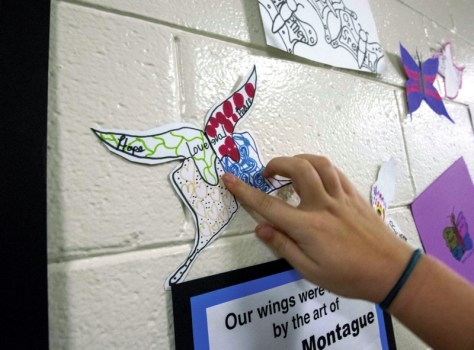 Emily Endress of West Rowan Middle Schoo, hangs her artwork of a butterfly. Seventh-graders learned about the poem 'I Never Saw Another Butterfly' about children lost in the Terezin concentration camp. Jon C. Lakey/Salisbury Post 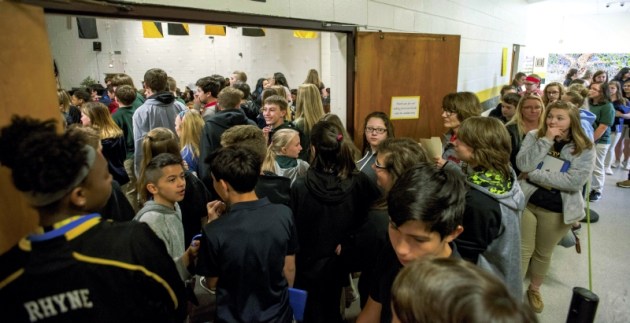 “(Nazis) wanted him to disappear from their society,” Gratz said of Gruener.

Gratz, author of the book “Prisoner B-3087,” spoke to seventh-graders as part of the Rowan-Salisbury Schools’ first ever Holocaust and WWII Humanities Conference.

It’s an idea that started with Gratz’s visit, which was arranged by Kelly Fiemster, the school system’s director of instructional programs. Fiemster reached out to Corriher-Lipe teacher Kendall Shue and media center coordinator Cheryl Lange, who use the book during the seventh grade’s required unit on the Holocaust.

But Shue and Lange dreamed big.

“Me and Cheryl, we don’t live in boxes,” Shue said.

“We kind of plan like an atomic bomb,” Lange joked, “and then we go back and build the bomb.”

Shue has studied teaching about the Holocaust at the U.S. Holocaust Memorial Museum’s Belfer National Conference for Educators. Lange is a Holocaust educator who works frequently with the N.C. Holocaust Council. Lange said she’s always wanted to have an educational showcase covering the “breadth of topics the Holocaust encompasses.”

On Wednesday, she got her chance.

The conference had been in the works since November, when Shue and Lange got the blessing of Corriher-Lipe Principal Tona German.

The school reached out to the N.C. Holocaust Council, which connected them to Queens University in Charlotte. The conference was first intended to be just for Corriher-Lipe students. But the idea grew quickly, and soon the school invited the district’s six other middle schools to participate.

German said she was hesitant at first but didn’t want to say no to something just because it was new. So she and her school went out on a limb.

Wednesday’s all-day conference featured dozens of speakers covering topics from the rise of Nazi Germany to the struggles of modern-day veterans. The two main speakers were Gratz and Suly Chenkin, a child survivor of the Holocaust from Kovno, Lithuania. Students were able to attend two sessions featuring a subject they found interesting in addition to Chenkin and Gratz’s presentations.

Seventh-graders across the district read “Prisoner B-3087” before the conference, so when Gratz walked students through the story of Yanek Gruener, they were prepared.

“For the next six years, Yanek has nothing,” Gratz said.

The author encouraged the students, who about the age that Yanek was during the war, to think about what it would be like to live through a similar experience.

“Think about losing that chunk of your life,” he said.

However, the teachers hope that students gained something else from Wednesday’s conference.

For Lange and Shue, Holocaust education serves an important purpose: it teaches empathy and how to relate to others with kindness and compassion — something that’s especially relevant in middle school.

She also hopes that students walked away from the experience understanding how the echoes of the Holocaust can still be heard today, and that students will have to fight injustice.

“We can sit around and say, ‘Never again,’ but fact of the matter is, it’s happening. So ‘Never again’ doesn’t work,” Lange said.

Shue said she hopes that her students will notice the patterns in society that could lead to another atrocity and that, when they do, they’ll be able to say, “No, we won’t stand for this.”

And she hopes that they’ll remember what they learned and the stories of those who spoke.

“That’s what Holocaust education is all about,” she said.

“Will we tackle it again next year?” German asked. “Of course.”