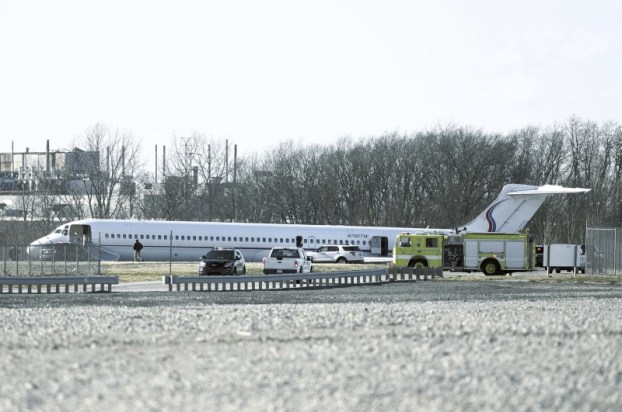 Emergency personnel examine a charter plane that was carrying members of the University of Michigan men's basketball team that was involved in an accident at Willow Run Airport, Wednesday, March 8, 2017, in Ypsilanti, Mich. The plane slid off a runway during an aborted takeoff in high winds, causing extensive damage to the aircraft. The team said everyone aboard was safe. Michigan faces Illinois in the Big Ten conference tournament on Thursday in Washington, D.C. (Melanie Maxwell/The Ann Arbor News via AP)

ANN ARBOR, Mich. (AP) — A plane carrying the Michigan men’s basketball team slid off a runway during an aborted takeoff Wednesday, causing extensive damage to the aircraft and forcing passengers to exit through emergency doors onto wings and slides at Willow Run Airport.

The 109 passengers and seven crew members didn’t suffer injuries, according to the Wayne County Airport Authority, which said the airport in Ypsilanti about 15 miles from campus was closed. The National Transportation Safety Board and Federal Aviation Administration will be investigating the accident, according to Wayne County Airport Authority spokesman Brian Lassaline.

School officials were working on an alternate travel arrangement as of 7 p.m. EST, roughly 17 hours before the team was scheduled to tip off against Illinois in the Big Ten Tournament on Thursday in Washington, D.C.

Team spokesman Tom Wywrot said the takeoff “was aborted” on a day marked by high winds and “after strong braking,” the plane slid off the runway and “sustained extensive damage.”

“I don’t think I felt fear until I was on the field and all I thought about was my family and the people around me,” Wywrot said in a telephone interview.

He praised the orderly way in which the passengers got off the plane.

“Without hesitation, the staff on that plane and the people — our staff, our players — on the plane knew what to do got off the plane fast and ran,” Wywrot said. “I’m very thankful and very happy for that. People were helping each other and nobody blinked. The emergency doors were taken off and we all got out. People had to get on the wings.”

Tyler Davis, a team manager, tweeted a brief video after the plane went through a fence and stopped on an access road and a low embankment.

Wind gusts topped 60 mph in the Detroit area Wednesday and DTE Energy said Wednesday afternoon that nearly 500,000 of its customers in southeastern Michigan were without power.