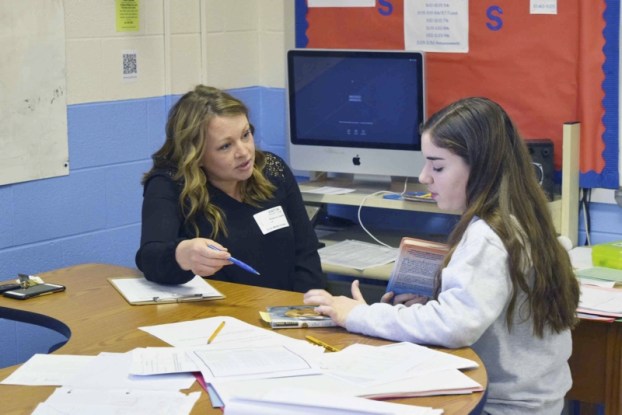 Rebecca Causby, left, talks to Erwin Middle student Kary Kalogeromitros, right, about a book during morning independent reading. Erwin recently launched a volunteer-based program encouraging adults to talk to students about what they're reading and to help them find books they like. Rebecca Rider/Salisbury Post

GRANITE QUARRY — Sometimes, all students need is someone who will listen.

That’s the thought behind a new Erwin Middle School program that encourages students to read.

The school already has a focus on literacy, giving students a short morning block for independent reading and challenging them to read at least 20 books across multiple genres. But not every child is a reader, or knows how to find a book that they’ll like, said Jane Wood, the school’s instructional literacy design coach.

After discussion with the Erwin’s media center coordinator, Lynne Robinson, the two launched a volunteer-based program to encourage students to talk about books they’d read, and to help them find more they’d like.

“Kids just blossom when they get to talk to you,” Wood said.

Volunteers are community members or parents such as Rebecca Causby, who takes 20 minutes to half an hour out of their morning to sit and talk with students during independent reading. Causby meets with students one on one, asks them how they liked the book they were reading and keeps track of the titles and the child’s opinion.

And it’s an opportunity that fits well into Causby’s schedule, she said. She drops her daughter off at Erwin and walks into the building. After working with students for 15 to 30 minutes, she’s still able to make it to work on time.

Causby said she thinks the program, though young, works because “it’s a neutral ground.” Unlike a teacher, literacy coach or media center coordinator, students don’t have to feel that they’re being judged, tested or evaluated — especially if they’re not readers.

“They might not want to make it know that they’re not really reading,” Causby said of some students.

They may tell her they left their book, which they’re supposed to bring to every meeting, at home, or in their locker. Causby feels out the situation. She tells students that it’s ok if reading isn’t their strong suit, but she asks them what they might like to read, instead.

“What would make you excited?” She asks.

Causby said the most common reaction she gets is relief — relief that someone isn’t judging them, or grading them.

“And I just see a whole lot of comfort,” she said.

And then they tell her about a book, or a series, they liked. The program has only been running for six weeks, but Robinson said the school library has already ordered several books requested by students who aren’t normally readers. All it took was someone who would listen.

But the small team is learning just how important having that neutral party can be. When talking to a parent volunteer, students feel comfortable. They can say anything.

“This is not an evaluator,” Wood said.

It also helps build up positive role models for students, and gets the community involved — something that is more difficult in middle schools, Wood said, but no less important than it was in elementary school.

“I just think you can’t overestimate the value of having that other adult and that positive role model,” she said.

It also helps change the approach the school is taking towards literacy. Normally when literacy is pushed in schools, it’s very instructional. This focuses more on fun and passion.

“We want this part to be the part that you practice and also the part you get to enjoy,” Wood said.

The program is still small, but they’re looking to grow. Causby has worked her way through one class, and said she’s looking forward to meeting with students a second time.

Wood said she believes the program is having a positive impact at the school.

Those interested in volunteering should contact Wood or Robinson through the school office, 704-279-7265. All volunteers must complete training with Communities in Schools. Class assignments are on a first come, first served basis.

‘This is my story:’ Holocaust survivor speaks to students

By Rebecca Rider rebecca.rider@salisburypost.com LANDIS — For the past several years, local seventh-graders have spent part of the year learning about... read more