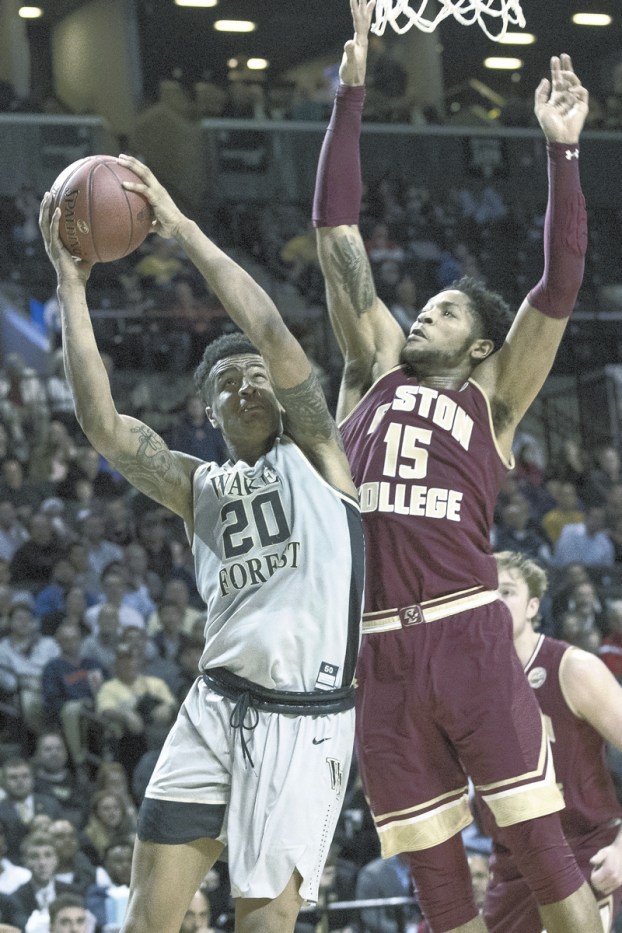 NEW YORK (AP) — Wake Forest was not going to play its way into the NCAA Tournament by beating last-place Boston College. The Demon Deacons did avoid playing their way out.

Austin Arians gave Wake Forest a lift from 3-point range in the first half and finished with a season-high 17 points to help the Demon Deacons beat the Eagles 97-78 on Tuesday and advance to the second round of the Atlantic Coast Conference Tournament.

No. 10 seed Wake Forest (19-12) will take a four-game winning streak and hopes of slipping into the NCAA tournament into a matchup with seventh-seeded Virginia Tech on Wednesday at Barclays Center.

“I can’t say for sure. Selection Sunday we’ll find out if 19 is the number that we end on, but that’s not our goal,” said Arians, who has scored in double-digits in each game against Boston College this season. “Our goal is to win as many games here in New York as possible.”

Last-place Boston College (9-23) ends the season on a 15-game losing streak and with star Ky Bowman on crutches. The freshman guard landed awkwardly on his right leg trying to contest a shot in the first half and returned to the bench in the second half wearing a big knee brace.

Arians, who was averaging 7.9 points, scored 12 in nine minutes of the first half, shooting 4-for-5 from 3-point range. Wake pulled away in the second half with a 14-1 run.

Bryant Crawford had 20 points and Keyshawn Woods scored 17 for Wake Forest. Woods went end-to-end with a steal and flipped in a one-handed shot while getting fouled to put Wake up 73-60 with 7:34 left in the second half.

Boston College: Coach Jim Christian is now 29-67 in three seasons at BC, but his job appears to be safe with the school in the process of finding a new athletic director.

Wake Forest: John Collins had only one shot in the first 24 minutes as Boston College sent double teams at the runner-up for ACC player of the year.

“I thought he handled it very well early on,” Wake Forest coach Danny Manning said. “He got rid of the ball. He didn’t necessarily get assists, but he got hockey assists. He got the ball to the first open guy, then we got it to someone else for a wide-open jump shot. That kind of changed how they wanted to guard him in the second half.”

Collins finished with 19 points and 12 rebounds.

Boston College had the game tied at 53 in the second half before Wake pulled away for good. Without Bowman, Boston College simply couldn’t keep up.

Christian said the team would not know the extent of Bowman’s injury until MRI exam was performed back in the Boston area.

Boston College:  The Eagles streak of seasons without reaching a postseason tournament is now six. The backcourt of sophomore Jerome Robinson (17 points) and Bowman provide hope for the future — if Bowman’s injury is not too serious.

“The last four games we’ve played have been some of our best basketball,” Arians said.

The end: Gottfried, Wolfpack go out with thud