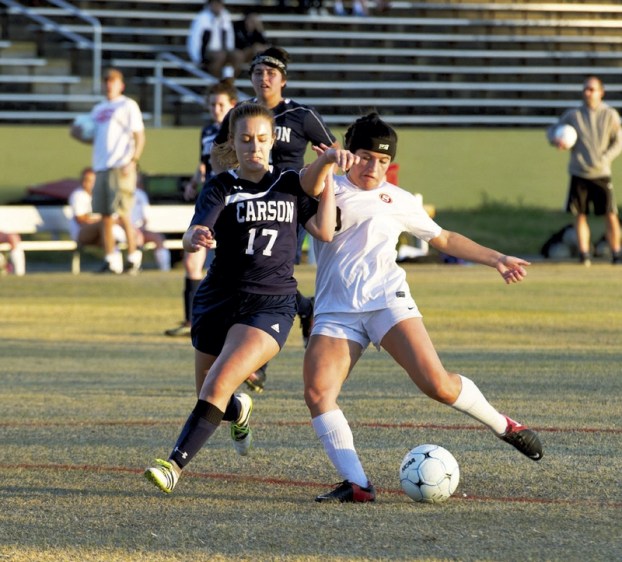 SALISBURY — A Polaroid of Salisbury’s girls soccer season is slowly developing — and so far coach Matt Parrish likes what he sees.

The Hornets gave him another reason to smile Wednesday night when they scored once in each half and gained a 2-0, non-conference victory over visiting Carson.

“In many, many ways, this was an important win,” Parrish said after Salisbury (2-1-1) beat Carson for the second time in two years. “When you graduate four starters, all of them in positions of need, it’s going to take some time the next season to find your place.”

So far, so good for Salisbury. The Hornets have counted on a cluster of underclassmen to blend with seniors Katie Bullock, Ceci Cardelle, Nellie Brown and Juliana Anderson.

“Everyone’s been displaced,” said Cardelle, a stylish striker who’s been forced to play a lot of defense. “We’re all in different positions and trying to figure out how to work together. Games like this give us that chance.”

Salisbury received goals from junior Emily Mann and Cardelle, while Anderson made six saves to record the team’s second shutout. Carson (1-2) was outshot, 12-6, and blanked just one night after depositing eight goals into East Rowan’s net.

“We got stuck playing more defensively tonight,” said Carson coach Lauren West. “They had more people in the center and we couldn’t mark them up as well as we would have liked. It forced us to change our formation from a 4-4-2 to a 4-3-3, which put an extra person in the middle.”

Carson’s most dangerous weapon was freshman Gracie Thomason, a sneaky-quick forward who nearly scored in each half. Most notable was a doorstep smash that Anderson swallowed, then coughed up, with 16 minutes to play. Only a deft defensive play by Salisbury’s Ellen Simons — who swept the loose ball away — kept the Cougars scoreless.

“We were very nervous coming into this game,” said SHS junior Julia Honeycutt. “Especially about No. 3 (Thomason). At any given time, we knew she could slip a ball through.”

West said someone in blue should have been trailing on the play, anticipating a rebound.

“We’ve struggled with this,” she indicated. “When someone takes a shot, we stop and watch instead of following through. We didn’t finish the play.”

Salisbury did, beginning when Mann took a crossing pass from Bullock and hoisted a lollipop of a shot over the head of Carson keeper Maren Shumaker. The ball tumbled and spun over the goal line, giving the Hornets a 1-0 lead just 13 minutes into the match. “It was a chip, a lob,” said Cardelle.

Parrish said it may simply have been a mistake that turned out well. “The pass came across the middle, but I think (Mann) may have missed it a little bit,” he said. “But missing it helped her out.”

Cardelle had a goal nullified by an offsides call late in the first half before closing the scoring with 17:45 remaining in the match. This time she settled Bullock’s long throw-in from the left side, turned toward the cage and rifled a 25-yard shot past the diving Shumaker.

“It gave us a chance to breathe,” Cardelle said after netting her third goal of the season. “It was really big deal for me because I’ve had three concussions, two of them playing soccer. It reaffirms that I can still work on the ball.”

Of course, West had a different perspective. “We just didn’t mark the player,” she said. “When somebody’s that wide open that close to the goal, it proves difficult.”

“Hannah Smith played a fantastic match against us last year,” Parrish said. “She dominated us and we still won, 2-1. I thought that this time Anna Grace Woolly and Maria Capito did a really nice job of limiting her. She didn’t get to move forward very much — and that was pivotal for us. We needed that effort.”

NOTES: Carson returns to SPC play Friday at J.M. Robinson. Salisbury is idle until March 13, when it visits A.L. Brown.