Prep Softball: East gets first win by the mercy rule 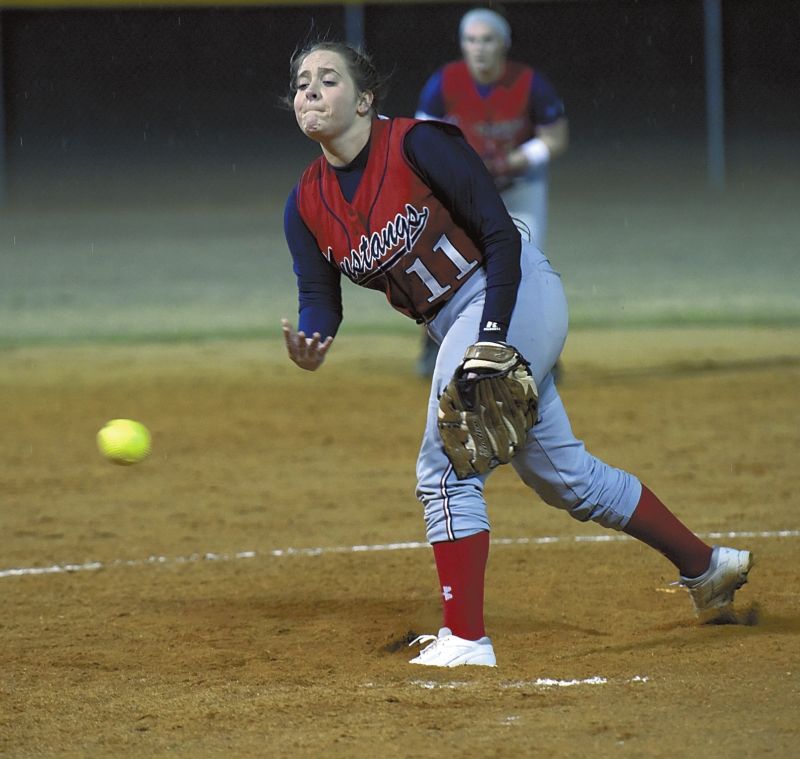 “We saw we had a chance for the 10-run rule, we did it, and now we can always say we 10-run-ruled Carson,” said soggy — but smiling — winning pitcher Bree Medlin, who battled the elements as much as the Cougars.

No one had expected anybody to be run-ruled. East has a very experienced team but hadn’t won a game before Tuesday’s rainy romp. Meanwhile, Carson had turned in a solid performance in a 2-0 loss to strong Central Cabarrus last Friday.

“We’ve got just about everyone back from last year and we finally put it together today,” Medlin explained. “We had hitting and fielding together for the first time.”

East (1-2, 1-1 SPC) also had pitching, although Medlin was too modest to mention that aspect of the game. She held Carson (1-2, 0-2 SPC) to three hits, including a couple of infield singles by Madison Barnhardt.

Carson had back-to-back singles with two out in the third, but Medlin got out of the jam with a popup.

Medlin also came through with the key hit of the game when she slapped a single through the left side  with the bases loaded and two out in the second inning. That clutch hit gave the Mustangs a 1-0 lead, and Ashlyn Fritz followed it with the bouncing single up the middle that boosted the lead to 3-0.

“We badly needed to start hitting,” said East coach Michael Waddell, offering an audible sigh of relief.  “It was great to see us get come through with some big, two-out hits. That got us started.”

Carson pitchers Katie Jewell, who started in the circle, and Rylie Stewart, who relieved her in the third, kept the Cougars in the game for a while by getting the Mustangs out with the bases loaded twice.

But the Mustangs blew it open with a four-run fourth. Fritz tripled to start the inning, a fly ball toward the line that right-fielder Callie Trasher made a valiant dive for, A slippery wild pitch made it 4-0. Johnson drilled a single to make it 5-0. Groundouts to the right side by Courtney Wagner and Nicole Fleming  — good situational hitting — pushed the lead to 7-0.

The game had been played mostly in the rain, and it was pouring when Medlin coaxed three straight groundouts from the Cougars in the top of the fifth.

Then Medlin opened the bottom of the fifth with her third hit. After Fritz flied out deep to right, Coryn Soul walked for the third time. After a wild pitch made it 8-0, Johnson’s double made it 9-0. Then Sprinkle’s whistling double plated Johnson and ended the game via the mercy rule.

“East is a very good hitting team, and we just didn’t show up,” Carson coach Charissa Duncan said. But it’s a long season, and I know we’ll bounce back. We’ve just got to start hitting.”

That’s something East started doing on Tuesday. East had 14 hits, with Johnson going 4-for-4. Medlin had three hits. Fritz had two. Soul went 1-for-1 with three walks.

“We had a lot of good at-bats tonight,” Waddell said. “We battled. Even on some at-bats where we didn’t get on base, we really made their pitchers work.  That paid off for us down the line.”

NOTES: Carson catcher Brie Bauer left the game after taking a foul tip off her mask, but she’s expected to be OK. … Waddell was confined to the dugout after arguing about a discrepancy on the Carson lineup card. … East lost an ugly one to West Stanly, 15-11, on Monday, but Waddell was encouraged by the way the Mustangs fought at the plate. They just didn’t field well and gave up a nine-run inning.  … Carson is scheduled to play at South Stanly today before taking on Robinson on Friday. East hosts Concord on Friday.